In this tutorial, I will walk you through a simple process to make Google Chrome touchscreen-friendly.

How To Make Google Chrome Touchscreen-Friendly On Windows:

Google Chrome Dev Channel for Windows. You can download the latest Dev release from here.

If you don’t have Google Chrome Dev installed on your system, follow the above link and install it first. Don’t worry about the current version of your Google Chrome, it will remain intact.

To enable this new touch-friendly user interface, you need to go to the Google Chrome flags page. To do that, paste the following text string in the address bar of your Google Chrome Dev.

Step 1 will open the Google Chrome flags and highlight an option named “UI Layout for the browser’s top chrome“. Besides this option, there is a drop-down tab which is currently set to ‘Default‘.  Click on the drop-down tab and change it to ‘Touchable‘.

As you change the “UI Layout for the browser’s top chrome” option to ‘Touchable‘, a ‘Relaunch Now‘ pop-up will appear. Relaunch the Google Chrome to enable the new touch-friendly user interface. 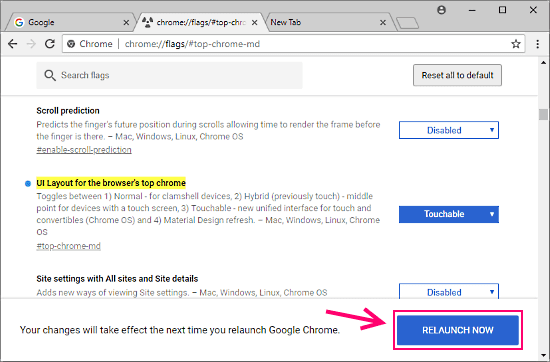 In case you want to go back to the previous non-touch interface, you can do that by changing the “UI Layout for the browser’s top chrome” back to ‘Default‘.

The mobile versions (Android & iOS) are best suited for touchscreen, but when it comes to Windows, we didn’t really have any option yet. But, now with this new UI flag option, you can finally make Google Chrome touchscreen-friendly on Windows.