Here are 4 free online Chess solver websites. These sites help you find the suitable next move against the opponent’s move. So, even if you are novice in Chess, you can learn to play chess and also sharpen your mind by knowing what should be the best move to play for the move of opponent. There are alphabets for chess pieces (a, b, c, d, e, etc.) and numbers (1 to 8) for Chess table. Based on these combinations, move will be suggested to you (like e5, c4, etc.).

It takes time, deep thought, and sharp mind to play Chess. Many times, it might be confusing for you to decide which move you should have played against a particular move. If yes, then these sites could be very helpful. These sites have different features. For example, you can flip the table, play with only king and queen, etc.

Let’s check these free online Chess solvers one by one. 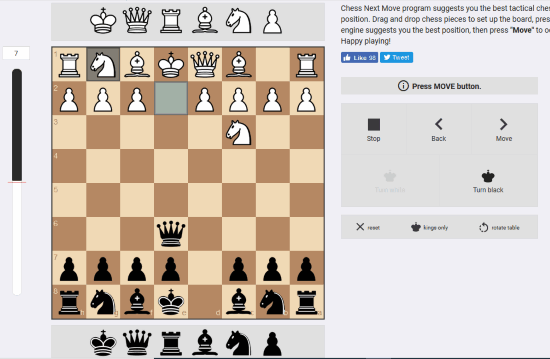 As the name suggests, this Chess Next Move helps to decide what should be the best possible move against your opponent. Here is its homepage. However, the thing is it doesn’t play with Computer. Instead, you will play from both the sides. Once a move is played, you can use play button to check the next best move and so on.

You can also reset the play and stop the move suggestions anytime. The options to play moves back and next are also available. Apart from that, it provides rotate table button change the black and white positions. It is handy when you want to see move suggestion from your end. 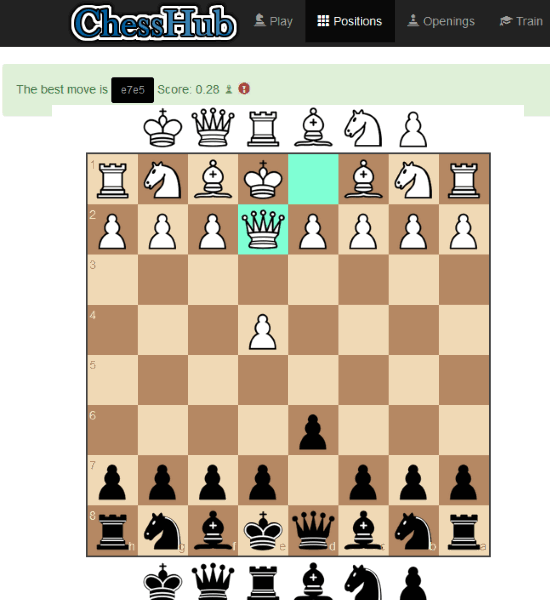 ChessHub.com is also a good website to find the best move against the move played by the opponent. For the suggested move, it also provides the score. So, you will come to know that how good it would be to play that move.

You can flip the table, select “White to Move” or “Black to Move“, and then it will show you suggested move. There will be alphabets and numbers for game pieces based on which you need to play the suggested move. You can also undo a move for any chess set. 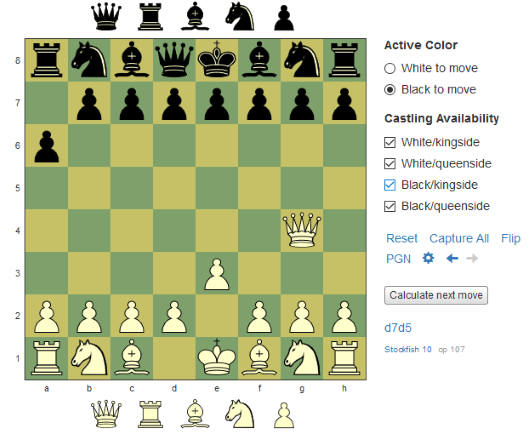 Next Chess Move (homepage) website is similar to ChessHub.com. It also suggest moves based on the chess set (black set or white set). You can select White to Move or Black to Move. Based on the depth and knodes/s, it will show the suggestion. Chess table can also be flipped using the available option.

The option to capture all pieces except king and queen is also there. This will help you check best possible moves when only these two pieces remain on the table. The interface is good and options are easy to use. This is a good chess solver website. 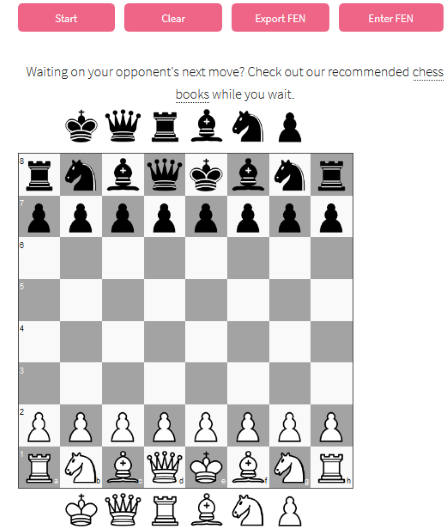 Chess Suggest is also a good option to use as online Chess solver. The interface is beautiful where you can add the chess table. After that, select the chess set (black to move or white to move) and it will generate the suggestion. It doesn’t show the score for the suggested move, but it helps to generate the best possible move.

It doesn’t come with additional features. Only the main features are present. If you need a simple online Chess solver, then this website is good.

Here I close this list which has best free online Chess solver websites. All are good as the main feature to suggest next good move is provided by all sites pretty well. Still, you can use all these sites first, and then use the most suitable chess solver for you.