The sound testing software that I have mentioned here can easily test the audio devices through a series of steps and some of them can generate a report of the test as well. 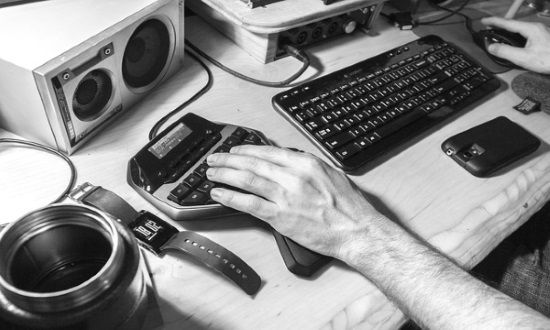 So, let’s start exploring this list of free audio testing software for Windows. 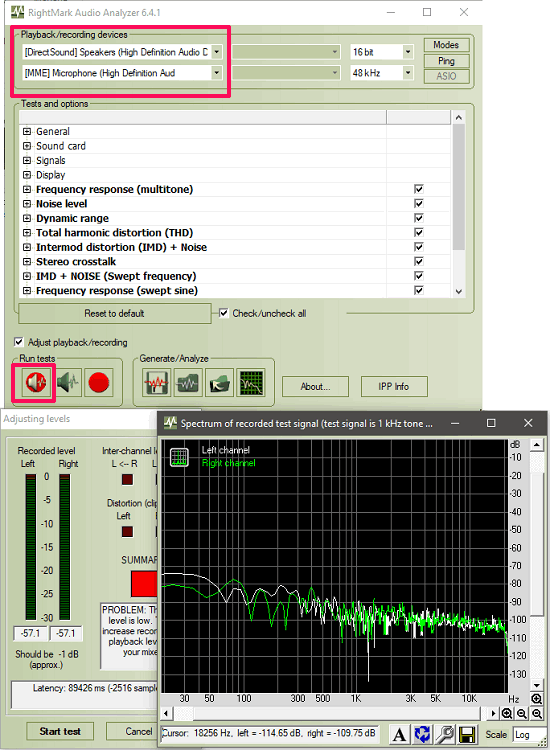 RightMark Audio Analyzer is one of the best free audio testing software for Windows. It performs a series of tests for audio. It calibrates the speakers of your system by playing sounds of varying frequencies and effects. The software is quite powerful one and lets you test the sound card of your PC. And not only the playback devices, it also lets you test the recording device, if there is any connected to your PC. All you have to do is specify the audio devices (playback and recording) from the two drop downs of the software. After that, let it do the rest.

Getting started with RightMark Audio Analyzer is pretty easy. Just launch the software and navigate to the two drop down which are available on the top left side of its interface. After specifying the playback and recording devices, click on the icon of the device that you want to test. The software will run for a short time and will play various sounds at different frequencies and variations to test audio devices. The different frequencies are recorded. When done, it generates a WAV file, which is nothing but the sequence of various signals and frequencies. You can export the final WAV file using the Generate/Analyze section of the software. 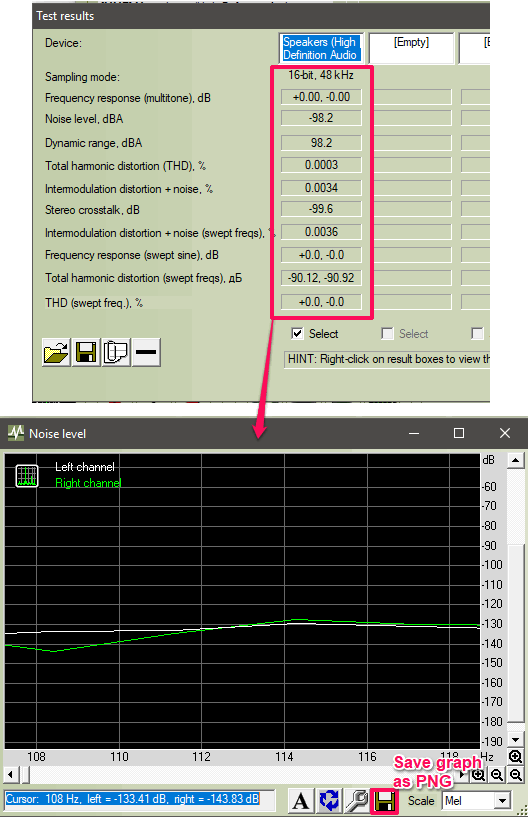 If you want, you can import the WAV file back and analyze that with the software. The analyzer of the software will analyze the WAV that you import and will show you some parameters related to the sound card. It shows Dynamic range, Noise level, Stereo crosstalk, harmonic distortion like parameters and some others with the actual values that it has calculated during the test. Also, you can see the graphical view (waveform) of each parameter that it shows in the test results. And you can save the waveform graph as a PNG file to any folder you like. You can see the above screenshot. 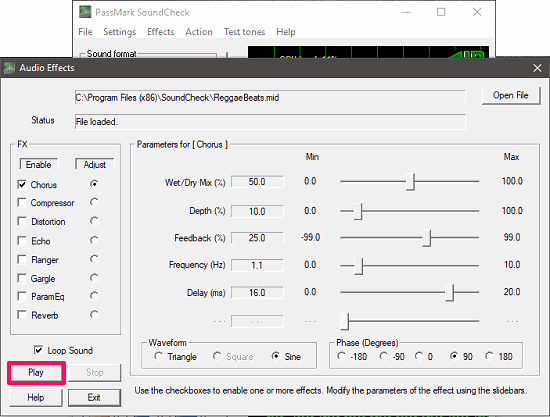 SoundCheck is a free personal audio testing software for Windows. Using it, you can check the audio system of your PC by running numerous sound tests. It uses its default MIDI file to carry out the tests. And there are quite a number of effects and parameters that you can opt during the testing phase. You can change frequency level, depth, feedback, delay like parameters and can choose from distortion, echo, reverb like sound effects. When you start the test, the software will start calibrating the audio device connected to your PC.

Whether it is a headphone or speakers, the output sound which will come out of it will be in the same manner as you have specified in the options. However, the software will not generate any report; you will have to manually analyze the sound to ensure that the devices are working fine.

Testing audio devices with the help of SoundCheck tool is pretty easy. Run the software and then navigate and click on the Effect > Audio FX menu of the software. Doing that will open the Audio Effects window of the software. If you want, you can play your own MIDI file during testing. Or, let it be the software default. Choose the effects and other sound parameters and finally hit the Play button. After that, you can listen to how the sound file is played to see if playback is fine or not. In the same way you can run the sound test by doing some other variations. 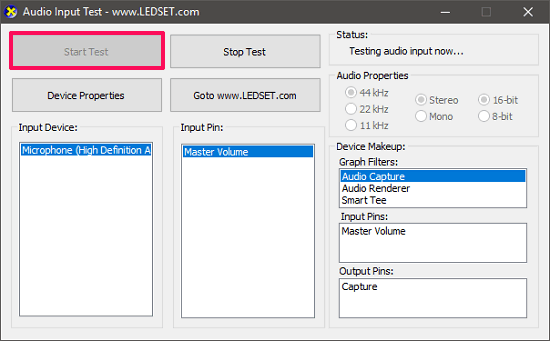 AudioInput Test is a lightweight and quite a different audio testing software for Windows. The software actually uses a microphone and pipes the audio input line to the output line. You can speak into the mic and corresponding sound will come out of the connected speakers or headphones. Additionally, you can opt for some audio properties such as changing the frequency of the sound, 16 bit or 8 bit sound and choose mono stereo channel mode, etc. The software is very simple and you can only test the sound input through it and there is no result or report it will generate. You will only able to test the working of speakers and mic through it.

Using AudioInout Test software for audio testing is very easy. Make sure that audio input and output devices are correctly connected to your PC. Then hit the Start Test button from its interface. After doing this, whatever audio is given as an input, you will hear that in the output. There are some options given on the top right side of the interface of the software. You can choose from them according to your needs. 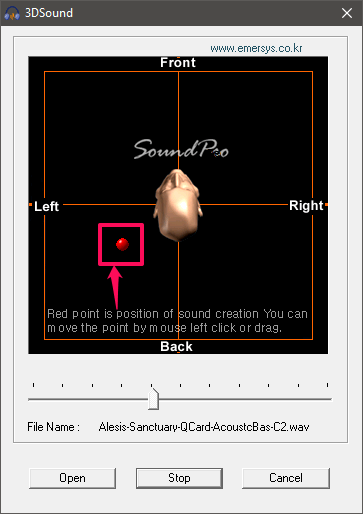 3D Sound Tester is another very simple software which lets you test your audio devices for 3D sound effect. You need a WAV file to assist the testing process. You can carry out the testing process on headphones, speaker or whatever audio system is attached to your PC. It has a skull in the center of the its interface and point that you can move around the skull to check the 3D sound effect. You can move the pointer to any area around the skull and the corresponding effect will be applied to the connected audio device. However, it will not generate any result for the test. You will have to analyze the sound by yourself

It’s pretty simple to carry out the audio testing using 3D Sound Tester. It comes as a portable software so you can easily open it and use it to test your audio system. After opening the software, specify the WAV file that it will play during the testing phase. It keeps playing the WAV file in a loop and you can move the pointer around the head to check the sound from any direction. It will not generate any test result or report that you can analyze.