Here are 2 free app screenshot maker apps for macOS. These apps allow you to create app screenshots of iPhone and other apple devices. You just have to import screenshots and these apps will add a frame around it. After that, you can simply export those screenshots in PNG and other formats that these apps support. after you export the final screenshot that these apps create you can upload that to app store or share with anyone you want. There are some other nice apps that you can use for free but they leave a watermark on the exported screenshot. But the apps I have added here don’t do that.

If you want to publish your app to app store then you usually have to attach some screenshots. If you create those screenshots manually then it will take quite some time to do that. But with the apps I have mentioned here, you can do that in just a few clicks. You can add a frame and then export the final screenshot. However, in the free plan you get limited number of frames but that is fine for individual developers. If you need more designs then you can try online mockups creators out there to do the same. 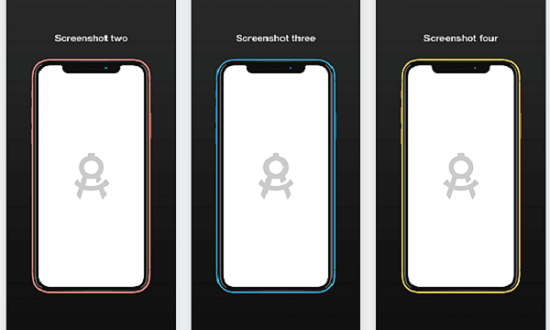 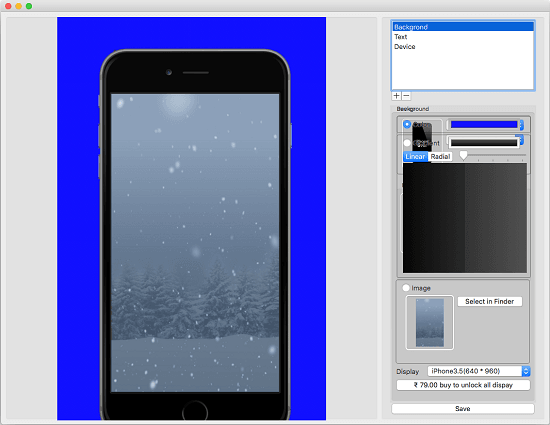 ScreenShot Design is a simple app that you can use to create app screenshots and export them. Here this app lets you create screenshots for iPhone, iPad, iMAC, iWatch, and lets you export them as PNG images. You can add a background to the screenshot along with a caption text. After selecting frame of target device, you just have to import an image from Finder to add to it. After that, you can simply adjust the screenshot and then save it. There is a long list of Apple devices in the app and you can choose anyone from that. However, for iPhone devices, it has only include devices up to iPhone 7 plus.

Use the above link to get this app from Apple app store. After that, you just run it and then start creating your app screenshots. On the main interface of the app, you have to choose a background first. After that, you select a device from the list. You have to choose a device type first and then select the target device for the screenshot. You can change the background color to tweak the canvas properties. Additionally, you can even specify a header text on the screenshot and the save all the changes. In the end, you fix the layout of the app on the canvas and then export the screenshot. Use “Save” button on the app interface to do that. 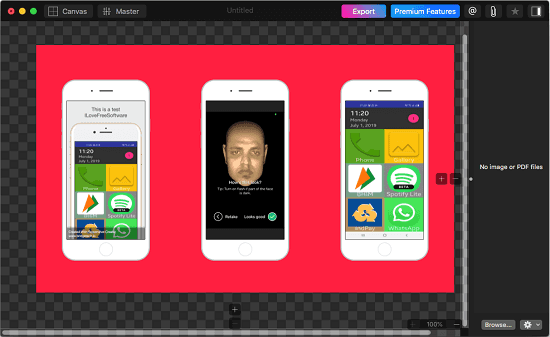 Vernisage is a simple macOS app to create app screenshots and export them. In the free plan, the app is kind of very limited but you can use it easily to create simple screenshots with multiple frames. It does supports vector PDFs to export but that is not included in the free tier; in free tier, you can only export the design as PNG image. You can include multiple frames either horizontally or vertically. This is a good thing as you don’t have to separately create multiple frames again and again. Additionally, it allows you to add a title to the screenshot and change background color.

Using the above link, you can get this app and then simply install it. After that, you specify the layout on the canvas and specify how many frames you want to show. Using the “+” and “-” button, you can specify the frame alignment and then edit the title of the screenshots. In the end, drag and drop the screenshot images on the frame separately to fix it. In the end, when you are done with the alignment, simply export the final canvas. You can see all the screenshots there and then do whatever you want. Also, if you want to enable advanced features, simply upgrade.

These are the only free apps for macOS that I could find to create app screenshots. Use these apps to quickly a create app screenshots and export them. You will find various devices in these which you can use in your projects, Also, you can change background and customize various things. So, if you are an app developer and looking for some free screenshot maker apps then you can give these a try.