Here are best free software to auto sync files between PC and FTP. Using any of these software, you can easily sync local folder with the specified FTP server. Most of these software provide two way sync, while some of them also provide mirroring and one way sync. To synchronize FTP folder, all you need is the hostname and password of your FTP server and path of the directory (optional). And after specifying the essential parameters, these software will sync local files to FTP. 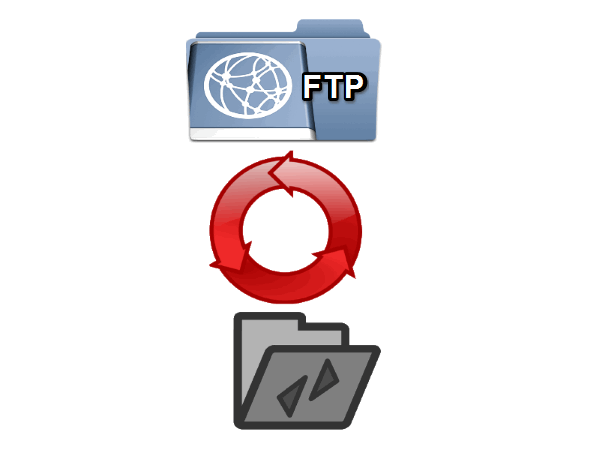 If you often use FTP clients to manually upload files to FTP server, then you know that it is too much time consuming process. But after using these freeware you will not have to do that. Just place your files to the local folder of the PC and the files will be synced to the corresponding bounded FTP folder.

Best Free Software To Sync Files Between PC and FTP

FTPbox is one of the best free software to sync files between PC and FTP. It can auto sync files from FTP to PC, PC to FTP, and between them (two way syncing). In FTPbox, you can add multiple FTP accounts, but you can use any one at a time to sync. And if you want to automatically sync files between local and FTP folder, then you can also do that. It has a scheduler that will run automatically after the specified interval of time. And if it detects any changes in the FTP or local folder, it will immediately sync files according to the sync method that you have specified. Another very nice feature of FTPbox is that it adds an extra option in the context menu of the Explorer. So, you can directly send files to the local folder which you are using to sync files with the FTP folder. And later that file will be synced to the FTP folder.

Getting started with FTPbox is fairly easy. You simply start by adding the FTP folder by providing the hostname, username, and password. After that, select a local folder that you want to sync with it. If you don’t specify any local folder, then by default it uses the system’s local storage folder to sync FTP files. And after closing it keeps running in the tray. 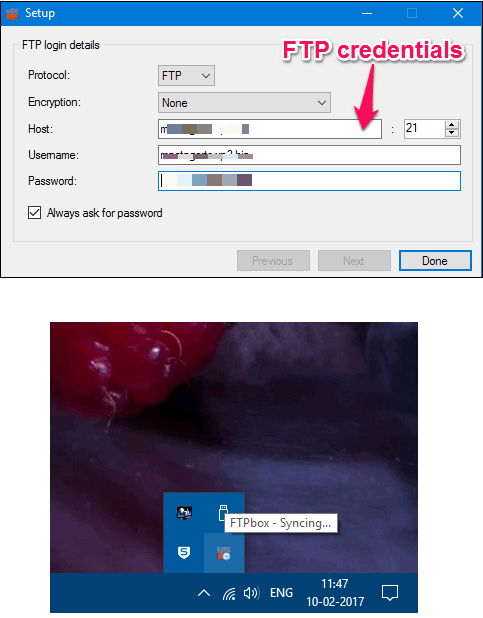 So, in this way you can easily sync files between PC and FTP using FTPbox freeware. And the best part is that you can add multiple FTP accounts in it to sync your files. If you use more than one FTP account usually, then FTPbox is a very good option.

IQBox is another nice software to sync files between PC and FTP. It works in a very straightforward way. IQBox is also very intelligent software that automatically detects any changes between the FTP and local folders that you have configured in it. Though, it doesn’t let you select files and also it doesn’t come with other options. Once you have configured it, it will keep running and whenever any change is detected in the FTP or local folder, it syncs that change in the both sides.

Getting started with IQBox is very simple. Just add the FTP account in it. After that, it will ask you to specify a local folder to sync FTP files. And then it scans both the specified directories and syncs them if it encounters any change in them. And when the task is done, you can minimize it to the system tray. When you minimize it, it keeps running and syncs all the data behind the scene. 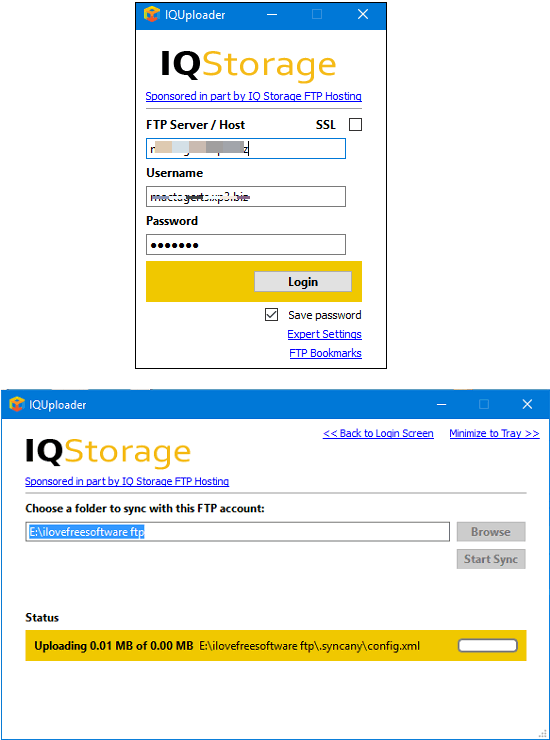 IQBox is a very good option if you are dealing with a single FTP server. And the software is still in development so I really wish that developers will add more options in the software to make it the best FTP sync software.

FullSync is another free software to sync files between PC and FTP. It is cross platform software that is available for Windows and Linux. You can create multiple profiles in it and you can sync them in parallel. You can also specify the type of sync that you want to use. Currently it supports Update, Copy, Backup, and Two way sync. Using any of the methods you can sync a FTP folder with the specified folder manually or automatically.

Using FullSync freeware is quite easy, you simply start by adding a profile in it. In the profile it asks you to specify the FTP server credentials, a local folder on your PC and the type of sync that you want it to perform. Also, if you only want to allow only certain files to sync between the folders, then you can use filters to exclude some file types. It automatically syncs files and you can also sync files manually anytime by invoking its interface from the system tray. 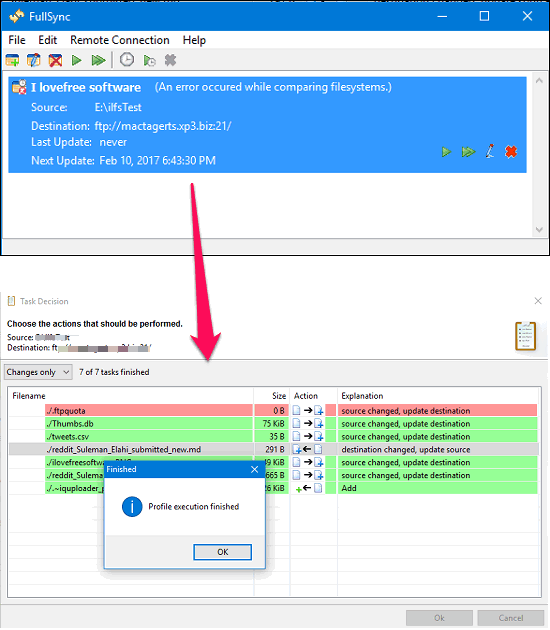 Overall, FullSync is a pretty nice software to sync files between PC and FTP folders. Also, you can create multiple profiles to sync multiple FTP folders with local PC folders.

GM – UniversalSync is a lightweight software to sync files between PC and FTP. It can sync files between the local PC folder and the specified FTP folder. GM – UniversalSync also comes with a scheduler that lets you schedule specific tasks to automatically run at a specified time. Also you can opt for various methods to run or disable a task automatically such as you can opt to run a task when PC is idle, or you can make it stop if there is less battery remaining in your Laptop.

To start configuring folders, simply add a profile and specify the FTP credentials and the location of the PC folder, which you want to synchronize with it. After that, click on the Compare button, and it will show you the contents of the FTP folder and the local folder side by side. After listing of the contents, you can hit the Synchronize button to sync files between the folders. 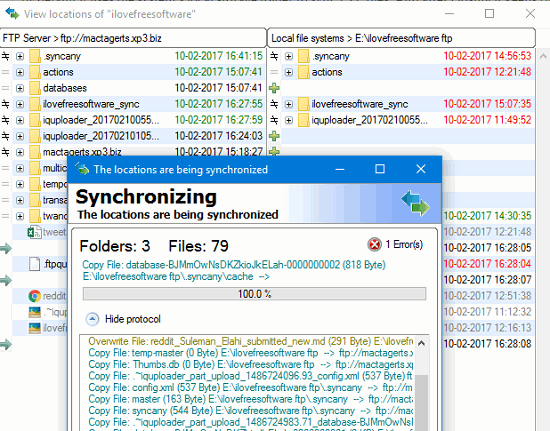 SyncBackFree is quite powerful software to sync files between a PC and FTP folders. It comes in two versions, free and paid. The paid version offers a lot more features, but in this article I will use the free version of the software, which is SyncBackFree. It offers numerous features to sync files between a local PC folder and a FTP folder. It supports multiple types of syncs such as two way sync, one way sync and mirror sync. You can specify the choice while creating a profile in it. Also, you can add as many profiles as you want and when finished you can make them run as long as you want.

Getting started with SyncBackFree is pretty easy. You start by creating a profile. And after that, it scans the FTP folder and the specified local folder. Then it lists all the changes in a separate window. The files that are available in the folder are marked green and the files which need to be synchronized, it will list them in a white color. And after running a particular profile, you can sync files between PC and the FTP folder. 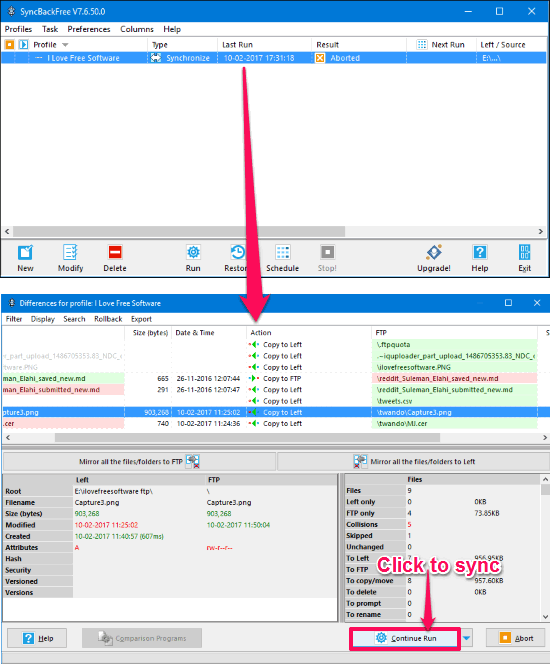 It is quite a powerful software to do that and you can add multiple profiles if you want to sync multiple FTP folders with the specified local PC folder. If you are a home user or a student, then you can use this software to fulfill your needs. Otherwise, purchase the pro version of the software to do the same.

Real Time Sync is another freemium software to sync files between PC and FTP folder. In the free version of the software you can only sync up to 100 files and 3 sync tasks. It offers various methods to sync files such as update target folder only, Mirror, smart bi-directional, sync, backup, etc. You can choose any one method and add it in your task. It also offers you exclude files that belong to the system or are hidden. It also lets you specify some filters to exclude some files by specifying the extensions of the files that you want to exclude. Also, it has provided a Real time feature by which, you can sync folders automatically in real time.

Using Real Time Sync is pretty easy, you simply start by adding a task in it. After that, specify the FTP credentials and the target folder on the PC where the files will be synced. Also, if you want to add some filter to the files, then you can also do that in an easy way. 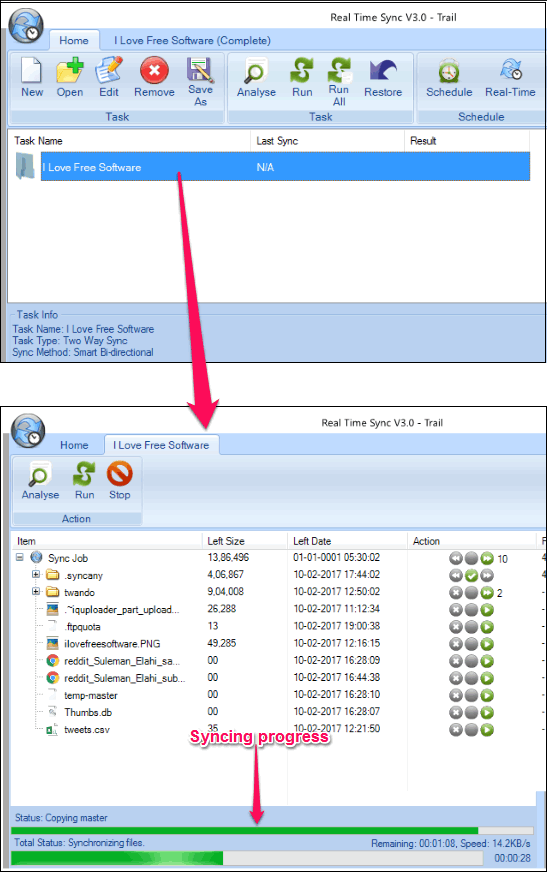 So, in this way you can easily sync files between PC and a FTP folder using Real Time Sync. The software does what it promises. However, the restrictions in the free version of the software made this software being the last one in my list. If you are okay with the limitations, then you may use it for moderate use.

These were some pretty awesome software to sync files between PC and FTP folder. These software offers various sync methods to synchronize files of the FTP folder with the specified local folder and vice versa. Some of the software mentioned in the article comes with many options while some of them only remain straightforward by just focusing on the goal. All the main features of the respective software I have mentioned in the context of each one of them. So, depending on your needs, you can give a try to any one of them.