Tweak Me is a free Windows Tweaking Tool using which you can change or modify the configuration of several features available in the operating system. It comes along with more than 180 registry tweaks that are commonly used in all the Windows Versions. The aspect that we all would love is that it’s pretty advanced as compared to the other tweaking tools available. Tweak Me has the capability of automatically detecting the OS and offering the tweaks which is compatible with the concerned version only.

With the use of this Windows tweaking tool you can improve the performance of your system making it much more reliable and secure. Adding to that the Windows tweaking tool never offers any type of harmful techniques such as the registry cleaning which has been the major cause of harming the system by other tweaking applications. One of the main reasons that you would like using this software is the usability it comes with. It has a very simple user interface which has been designed in such a manner that even the beginners have no problems using the application.

As a recommendation and the level of security the tweaks are indicated in different colours. With the use of this tool you can perform several options such as tweaking various settings, programs, and features of the Windows Operating System. There are different versions of this software where for some systems you may have to run the installation or on some just downloading and unzipping would be only thing required. It comes for free and is basically a tool which gives a quick access to the tweaks which is not easily accessible.

Don’t forget to check out GIGATweaker reviewed by us.

Interface And Working Of This Windows Tweaking Tool:

The Main screen of the this Windows tweaking tool when run presents 4 options namely: 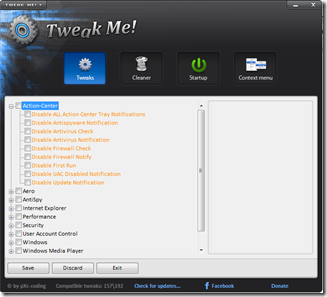 In the Tweaks section, one is provided with the option of tweaking the settings and the way some of the mostly used software run on a system. For example in the Action-Center you get the option of disabling features such as the firewall checks, antivirus checks, update notifications, etc. 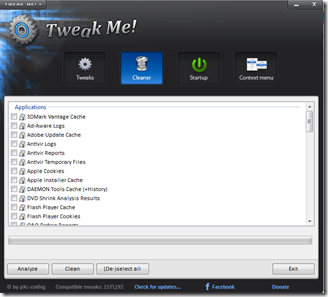 In the Cleaner section the software gives you the option of analysing as well as cleaning some of the unwanted files that are cluttered within your system. For example it would help you clear the cookies, history, or the temporary files of your internet browsers. It’s effective not to keep the files which are of no use for your system and piles up taking the extra space on your system. 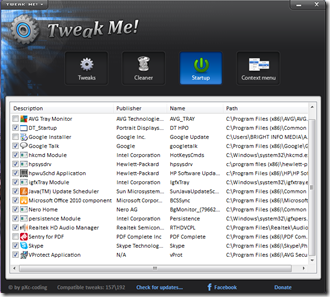 In the start-up option you could actually access the option which many of us accessed using the traditional ways of typing ‘’msconfig’’ code in the windows run option. Here you could enable/disable the programs you wish to run automatically when windows are started. It becomes quite handy as you can uncheck those applications which you do not wish to run at the windows start-up. Many applications on installation automatically configure themselves to start every time ‘’windows’’ is started. 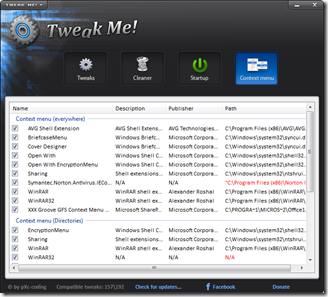 The last among the 4 main options available in the main window is the context menu. Here you can check/uncheck the presence of the context menus in your system, drives, or the desktop wallpaper or the directories. 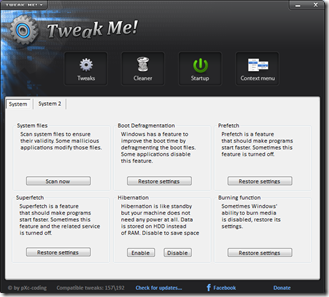 Moreover by clicking Tweak Me at the top of the application window one is presented with several options namely: Profiles, Logs, Options, SSID Optimization, Fixes, About, and exit. All of these options provide additional tweaks and settings to run this software and other programs on the computer. The screen above (screenshot) which is accessed by clicking on ‘’Fixes’’ provides us the option of scanning the system, performing boot defragmentation, Restoration of the settings for most widely used applications, etc.

You can use Tweak7 for tweaking settings of Windows 7.

Downloading And Installation Of This Windows Tweaking Tool:

Overall Tweak Me is an efficient Windows Tweaking Tool which performs the task of keeping the system error free and bringing almost every tweak option in a single application window. It not only reduces time but also becomes quite handy for the people who are not techies and would never have thought of performing such operations to make their system far more efficient.