Here is a list of 5 music players that use a command line interface or simply a command prompt to play audio files. A command line audio player basically plays an audio file by the means of entering a command in native terminal. The command invokes the program which parses and streams the audio file. One of the use of these programs is when you make an installer batch to play in the background, as you see in the installers. It’s also handy for Windows users that use the command prompt a lot. To get them working, you have to copy and paste the application files in the System32 folder of Windows or alternatively, you have to set the environmental variables for it.

Some time back when I was looking at this online terminal radio, I thought if music players exist that use terminal to operate exclusively? This is what caught my gears and made me search for such free audio players that employ only a command line user interface. The results were engaging and that is what I’ve brought you guys.

And, BTW, you might also want to check out audio players without any interface! 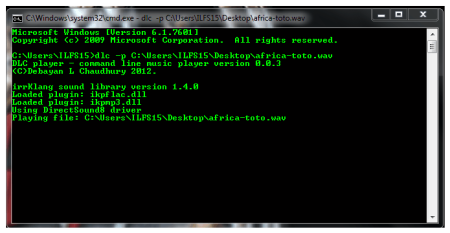 DLC player is a Windows based command line audio player that plays MP3, FLAC, OGG, WAV, etc audio files. To do this, it uses the IrrKlang sound library that is used for C++, C#, and dotNET languages. DLC Player always includes commandline parameters when you try to run it. To play a song you need to use the keyword dlc, and in the syntax: ‘dlc -p’. A very cool feature of this player is that it packs audio effects like flanger, compression, echo, distortion, etc. If you like adding audio effects, then check out this list of audio editors which can do the same.
You can also configure DLC Player to play files with specific extension by using wildcard ‘*.extension’. 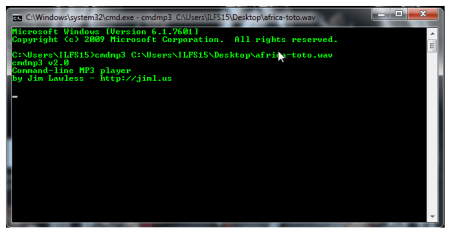 CmdMp3 is a free command line MP3 player written in C language. It works by launching the command prompt and using the extension CmdMp3 with the audio filename. It is a simple audio streamer with only a CUI. CmdMp3 cannot play any other audio format than MP3. To play an MP3 file using CmdMp3, launch the Command Prompt. Then use the keyword CmdMp3 in the format ‘CmdMp3 <filename>’. The file will play until you manually end the program from the task manager. 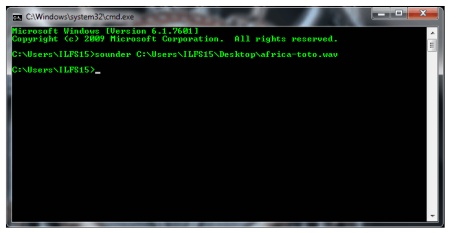 Sounder is a simple CUI audio player. It is akin to the CmdMp3 player but, in this case, it can only play WAV files. Like the others in the list, you have to launch it through the command prompt. The command to launch it is ‘sounder[/stop] [/loop times] [/timer ms] [/help] filename.wav ‘. As you can see in the command format, this application lets you stop the existing playback with ‘/stop’ command. Other than that, you can also set the file to play in a loop and enable a timer. A really cool feature I discovered about this audio application is, that you can play multiple WAV files simultaneously. 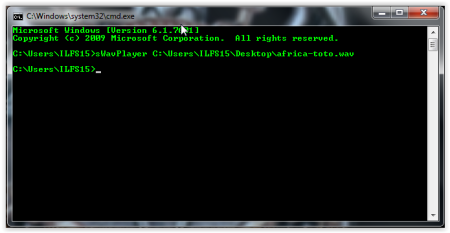 SWavPlayer is another WAV format player that is used from command line. It is just like Sounder. What makes it different from sounder is that, even though it markets itself as a WAV player, it can play MP3 files as well. Apart from that, sWavPlayer has only one parameter, unlike sounder. To launch sWavPlayer from the terminal, use ‘sWavPlayer [parameter]’. You can play multiple instances of it simultaneously, but it doesn’t have a ‘stop’ option to stop them playing all the files, like Sounder has. 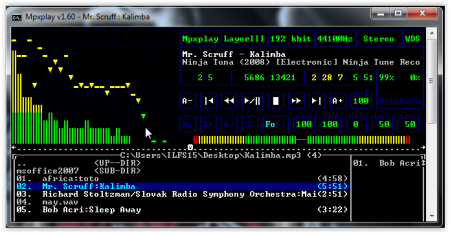 MPXplay came to me as a surprise when I was looking for CUI based players. I did not expect that I would find an audio player with a well made ‘GUI within a CUI’. It’s CUI-ception! *excuse the bad joke*. MPXplay is a well-programmed commandline audio player that can handle multiple audio formats. It can even play lossless audio.
The interface includes a navigation bar, visualization, speed control, file tab, seek bar and many more features, just like a normal GUI audio player. It has lots of parameters you can launch it with, unlike the other players in this list. To use it, you have to use the hotkeys on your keyboard. This audio player goes beyond its limit as a simple CUI player by even letting you play Internet Radio through HTTP and play audio files through FTP. This application is definitely a marvel among the others in this list and this why I insist you HAVE to try this player out.

All these commandline players seemed to function as they intended to. Some went a step ahead. Among these players I think MPXPlay is what music-savvy people will definitely love. MPXPlayer delivers way more than just a commandline audio application. It presents itself as a proper music player that would’ve been the first choice in DOS era. You can choose the other players to play audio casually or use these applications integrated with other applications, like an installer. These audio applications also take a negligible toll on your system, almost as if they are not running. However, if you’re not satisfied with these CUI players and would like ‘see and click’ GUI players then there is a long list of such audio players you can check out.

What would you use these command line mp3 players for? Do tell me in the comments!