In this blog post, you will read about best free visual novel maker software. You can download the software named Novelty. Though the software is in Beta. But works good enough to create a visual novel. Once it is installed, it shows multiple windows in one interface. There are Story window, Property Inspector, Action window and Action catalog. To make a visual novel, you can add character image, text, audios, and use other actions to let your novel characters perform.

The visual novel maker does not require coding to add actions and other movements. You can use its features such as add more pages, chapter, play BGM, play vocal, play sound effects, shake objects, shaking the camera, flip objects, change animation, change the state of objects, fade objects, change object visibility, change the background, etc. It is really a great way to make an animated novel and novel writing tool. 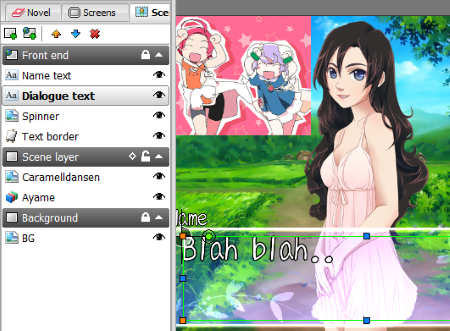 First of all, you need to install the software named Novelty. Using this software, you can easily create a visual novel. There is no requirement for coding. You can use its tool and other actions to add visual effects in the novel.

After installing the software, you can open it. The interface has multiple windows in it. In the middle, you will see the main interface. Here, you get to see the design of a visual novel. On the left, there is a story window. This is the main action area. From here, you can add visual elements in a novel. You can use tools like Novels, Screens, and Screen layers.

Also, you can add layers, global layer, switch between pages, move up and down. You can remove the pages in between the novel.

In order to add images, you can click on the File (on the top left) and browse images from your computer. From there, you can also import assets like audio, images, bitmap fonts to add in the novel.

Once you add input file in the interface, it appears in the main interface as a first page. You can click on page 1 and then it shows the Property inspector, Action window, and Action catalog below. 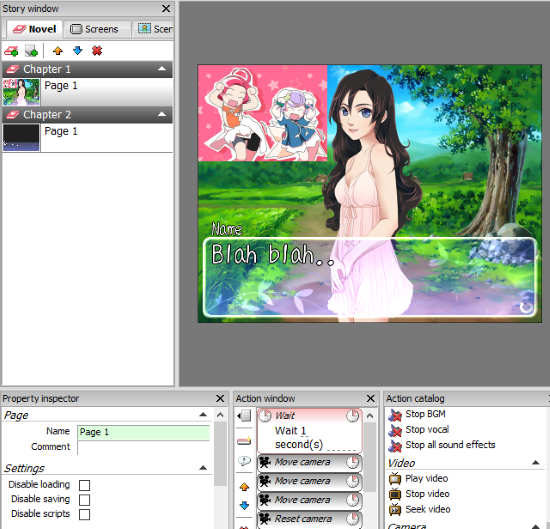 Here, you can customize the novel. The property inspector enables you to move the camera and other camera settings. You can target the scene layer, front end, background or the entire scene.

In the action window, you can add actions such as audios, camera, scripts, paragraph, objects, transform, dialogue, story, and video.

Once you’re done with the first, you can click on the Add new page on the top left. And then, use the aforementioned actions to create a visual novel.

Similarly, you can add other elements such as set game variable, run script, shaking the camera, flip objects, change animation, change the background, rename actor and a lot more.

After adding all the actions, you can play the novel as a preview. For that, go to the menu on the top left. There you can play novel as stand-alone, from the current page or play the entire novel. You can export the novel by clicking on the File -> Export. And the novel made by this visual novel maker software.

There are a lot of visual novel makers available on the Internet. But most of them are either paid or on trial. Novelty software is free to use. It lets you add actions, dialogue, objects, and many more elements. You can easily make a visual novel in very less time.