Guesswork Landmarks is a free Windows 10 picture guessing game. In this game you have to correctly guess the landmark given in the picture. The picture is also not fully revealed to you, it is covered with small square blocks and each block has to be clicked to reveal the picture. The fun thing is that you only get to take away 10 block from the hidden picture and then guess which landmark is shown in the picture.

The app can be downloaded from the Windows 10 store or from the link given at the end of this article. The first time you launch this app you will get a screen like the one shown in the below screenshot. 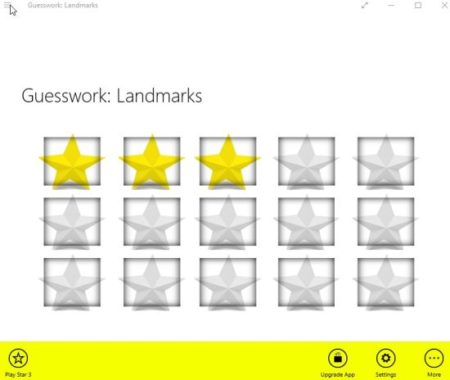 The app has various star levels in that game and each star level has 10 games each. So that makes more then 100 levels for you to play. All the levels are free to play, but the app does support ads.

To start playing select a star and the below given screen comes up. 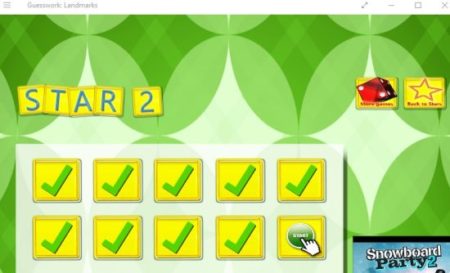 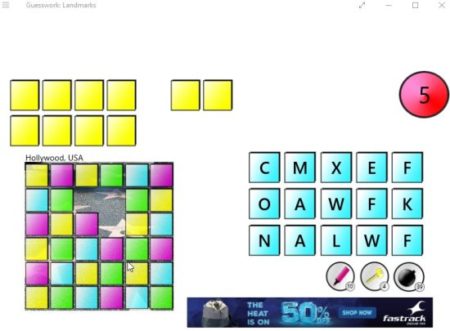 The window you see in the screenshot above is the game window. The picture here is covered by small blocks and you are allowed to uncover 10 boxes only for guessing the picture. At the top the blank yellow boxes represent the name of the landmark. So you know that the landmark name is 3 words and length of each word as well. The right side has a big red circle with numbers in it, that is the timer running which shows how time you took to guess a picture. Below the timer are random letters which you have to click to fill in the yellow blanks above. Below them are the hints you have. You get three types of hints:

Reveals: This option reveals one letter from the name of the landmark.

Keys: Reveals the entire picture under the blocks. After you have removed the 10 free blocks, this option will help you remove all the blocks from the picture.

Features of this app:

The guessworks app is pretty good and can be used by teachers to quiz their class. It can be tried out at home to check how good you are with world landmarks. Do give it a tr