Notepad Next is a free Windows 10 notepad app. It can be used as an alternative to the built in Windows notepad. It is made for the common user, with a basic and simple interface. It has minimal options on its interface and is easy to use. It does not have any complicated options like in Notepad++ which is more of a programmer centric notepad.

Now when you install this app and open it, you will see a screen like the one shown in the below screenshot. 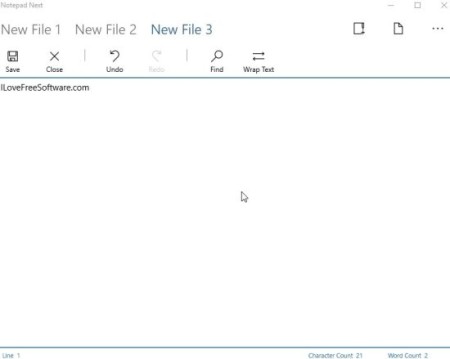 Here you can see the interface of this notepad. It has few options which are pretty basic like save, close, find, undo, etc.

Some Key features of Notepad Next:

Everyone knows how to install apps on your Windows 10 PC. So go ahead and install this notepad app from the link given at the end of this article. After that open the app and start writing.

The screenshot above shows the minimal toolbar of this notepad. You can also see that I have 3 notepad files open at the same time.

Overall, I found this notepad pretty useful. It has no confusing options and is perfect for the ordinary user. Just open it and start writing. Another cool thing is that you can open multiple files together to work. As the developer of the app has mentioned that the app is still in the development phase, so you can expect improvements and new features to the app in future.

Checkout Notepad Next for Windows 10 here.