OCEARCH’s Global Shark Tracker is a free online application to track Sharks online while sitting at home. It basically shows you the world map with pointed GPS tagged Sharks. It gives ocean researchers and marine life enthusiasts an opportunity to track sharks from anywhere in the world.

This is a really awesome and educational service for everyone. This free online service not only tracks the Sharks, but gives a lot of information about the tracked Sharks including pictures and videos. For each Shark, Global Shark Tracker also gives you information about its size, species, and an extended description. 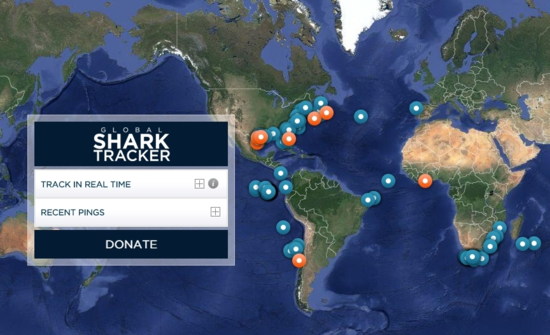 So let’s start exploring the seas for these exalted but deadly aquatic creatures! If you want to educate yourself more, then don’t forget to check out these 5 sites to learn about marine animals.

With a huge world map and location pin pointers, you can easily follow these majestic sea marvels. You’ll get a panel on the left which will show you options for two things: Track in real-time and Recent pings. Track in real-time lets you tack any type of shark with some selected constraints chosen by you. Recent Pings tells you about the sharks that have recently pinged the locators via GPS when they came on the surface. So let’s take a better look.

On Global Shark Tracker, click on the plus sign to cascade the track in real-time option. You can also move the panel around since it’s detachable. The little ‘info’ icon on the right will inform you that orange-colored points are Sharks than have pinged in less than 30 days. Hence, they are fresher than the blue points which show Sharks whose pings are more than 30 days old. 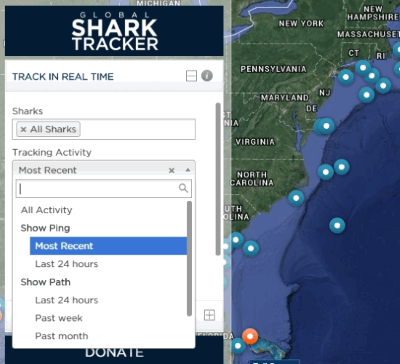 You can track sharks based on 4 choices. The first choice is the tracking based on activity. You can choose to track based on the time of the ping as well as track the movement path throughout the day, week, month or years.  Gender will track Sharks of any one of the two genders and Stage of life will track sharks based on their age. The Tagged at drop down choice will show you hubs where the tagged Sharks are mostly found. Click on Track Shark to start tracking or clear to clear all the options that you have entered. 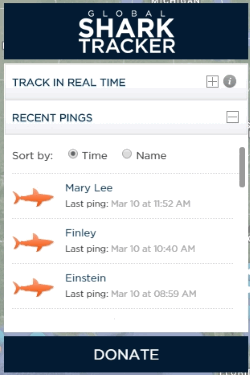 You can track Sharks based on their pings on Global Shark Tracker. The Sharks can be listed by their name (in alphabetical order) and the freshness of their ping. Select the Time button to see Sharks through their ping time and Name to see the alphabetical list.

Click on a Shark’s pointer on Global Shark Tracker and you’ll see a bubble box showing the details of the Shark. You’ll be given its picture, name, gender, date tagged and location where the shark was tagged. On the bottom, if you click View Track then you’ll see the path the Shark has covered on the map since the time it was tagged. You can click on any waypoint of the path to know the date when the Shark was there. 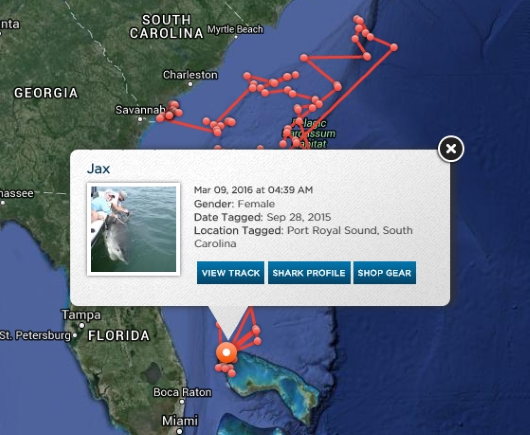 If you click on Shark Profile, you’ll get more knowledgeable facts like the gender, species, description, videos and pictures of the Shark. You’ll also get to know how much the Shark has travelled in 24 hours, last three days and since it was tagged.

Back on the bubble box you can shop for OCEARCH’s merchandise.

What else Can you see on Global Shark Tracker?

Global Shark Tracker not only tracks the movement of Sharks, but also Shark conservationists and their Ships. I got to know this when I tracked a ‘Shark’ travelling from Australia’s Coral Bay, passing the Panama to reach the Texan Bay. 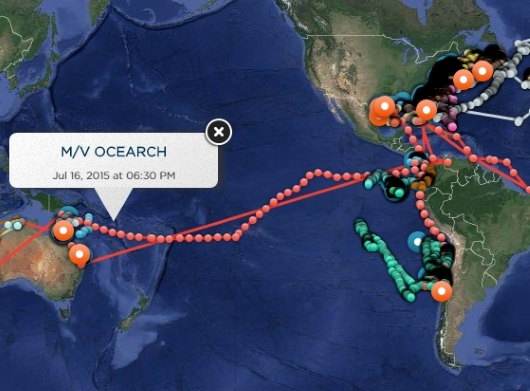 Unlike the usual in this Global Shark Tracker, I also found a Turtle being pin pointed near Hawaii. Its name was Kekoa and belonged to the Green Sea Turtle (Chelonia Mydas) species. 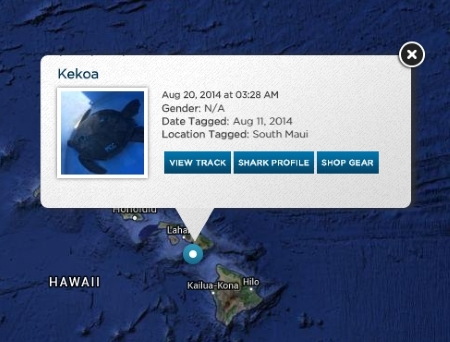 On the land you can see special green highlighted locations. These are Wildlife sanctuaries and Forest Parks. When you click on them, you can see their location (sometimes exact address). You can open them separately in Google Maps to get a better view with their pictures included.

Global Shark Tracker by OCEARCH is a very noble approach to educate and make the masses aware of Shark conservation. This is a really good free web application to kill time but educating yourself in the process.

The only disappointment I faced was that I couldn’t track Sharks by their species since I really wanted to track Bull Sharks, Great White Sharks and Hammer Heads. Also, it doesn’t really track the shark in real-time since I could not see any live movement. Though all the negative points aside, I think this free online Global Shark Tracker definitely deserves a spot in the 5 star band.

What do you think of Global Shark Tracker? Tell me in the comments!