Here, are 5 free iPhone apps for compass. Why we need a compass app when iPhone has a built-in digital compass? Third party compass apps have such interesting features that the built-in compass seems dull and limited in front of them. 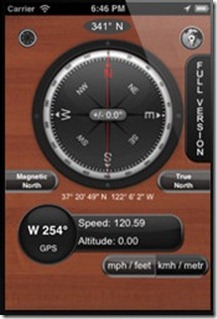 Compass 54 Lite is an excellent all-in-one navigation app. Along with a simple app for compass, Compass 54 Lite offers more. This iPhone app for Compass shows orientation to the magnetic field in real-time. Compass 54 Lite also displays the weather and map routes. Along with displaying longitude and latitude, altitude and speed-o-meter are also a part of this app for Compass. The speed can be switched to both kmph and mph. However, this app for Compass works only on iPhone 3GS, iPhone 4 and iPad. The lower version of iPhone does not have an in-built magnetometer, and due to this reason the app does not work on them. The pro version of Compass 54 costs $0.99. 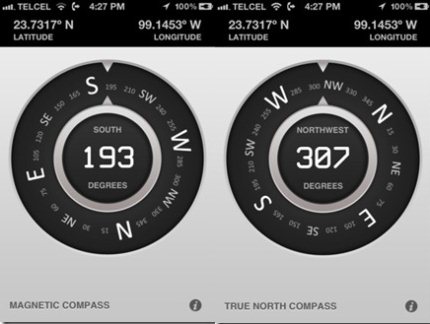 Digital Compass is one of the most popular iPhone apps for compass which is also compatible with the latest operating system version – iOS 5. The app for compass is perfectly made for retina display of iPhone 4. There is a rotating circle compass in the center. Users can also view the current longitude and latitude on the top of the screen in Digital Compass app. The compass heading can be set to various orientations like Magnetic Compass and True North Compass. Digital Compass has a simple user interface and is very easy to use.

iPhone users can check out other iPhone apps reviewed by us. 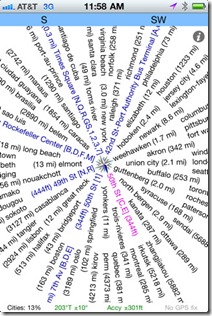 City Compass is another popular app for compass designed for city surfers. This free app for compass is a little tricky app there. However, once you understand the working of this app for compass, it can be one of your favorites. Instead of having a big rotating compass. There is a tiny compass in the center surrounded by names of streets, towns and cities. Sitting somewhere with City Compass, you can always know that where your home is? This app for compass even works fine without requiring any Internet or GPS connectivity. 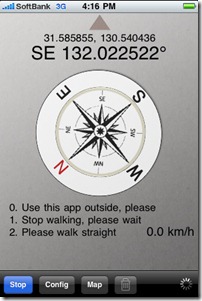 Apple iPhone 3G does not have an in-built magnetometer. So there’s no integrated compass in the device. Compass for 3G is dedicated to 3G users. This app for compass uses phone’s GPS to work. To use this iPhone compass app, you have to integrate the compass first. To do so touch the start button, move a little straight ahead and touch the stop button. Compass for 3G is a free ad-supported app. Purchasing the paid version will remove advertisements. 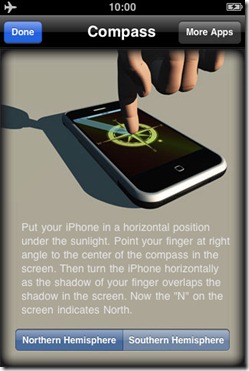 Compass Free is a simple iPhone app for compass. This compass app works in the same way as nature travellers find the north direction on the  Discovery Channel shows like Man VS Wild. In the Apple devices that do not have any magnetic compass like the original iPhone and iPod, Compass Free is the only choice they have been left to install a compass app. The direction to integrate the compass can be found on the iTunes page or in the picture above.