Here are 2 free online TIFF merger websites. Adding the input TIFF images from PC is pretty simple on these websites. When the TIFF images are added, you can process them with a single click and get the output. The output file is generated in the same format, which is TIFF. So, unlike other TIFF mergers, which actually merge TIFF files but generate output in PDF format, these websites are better to use because output is generated in the original format. 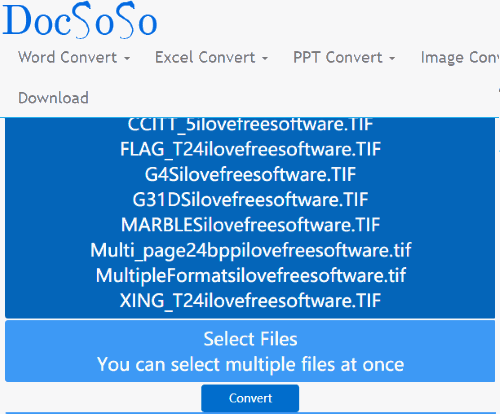 DocSoSo is one of the best online TIFF mergers. You can add multiple TIFF files (single page as well as multipage) on its interface and the list of all those files is visible there. There is nothing mentioned about file size limit so you need to check the size limit yourself. I guess it is good for regular size TIFF images. Also, you can’t remove an added TIFF so you need to be a bit careful while adding TIFF images.

When TIFF images are added, use Convert button. Finally, it will upload those files and create a single multipage TIFF image. Download that image to PC and then you can also delete the output. This website also removes your uploaded TIFF files automatically after two weeks. 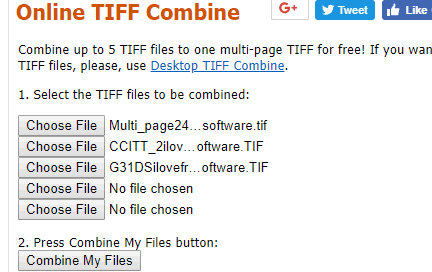 CoolUtils.com Online TIFF Combine (Homepage) is also a handy website. This free website lets you add maximum 5 TIFF images and create a single TIFF image containing all of those images. Both single page and multipage TIFF images are supported for merge process.

When TIFF files are added, press “Combine My Files” button. It processes the input images and generates the output. As soon as output TIFF image is ready, it opens a save as window using which you can download output TIFF file to the folder of your choice.

File size limit is not mentioned and it also doesn’t provide any information about what happens to uploaded and output images.

These are two helpful websites to merge TIFF online. Both are pretty good in what they provide. Still, the first website is definitely better than the second one. The only reason is it supports more than 5 TIFF images and input and output TIFF images are also removed by the website.