In this article, I’ll cover 3 free Android apps to take photos at regular intervals automatically. Mobile photography is gradually improving over a period of time. Now, the camera in our phones can capture photos at a rapid enough rate to capture the action moments. But since we have to manually click the photos, we often miss the best shot.

Here are 3 free Android photo sequence apps that will help you capture the perfect shot. Unlike the regular camera apps, these apps take a sequence of photos when you capture a shot. So, if you miss the moment in the shot, you can go through the sequence capture during the shot and choose the best shot. Some of these apps saved all the photos captured and some lets you pick the one upon capture and save only that one. Let’s check them out one by one and see which one might fit into your needs.

Self Camera Timer is a free Android photo sequence app that you can use to capture action shots. The highlight of this app is multiple timer options it offers to capture the best shots. It covers single-capture self-timer to photo sequence, capture timer, and more.

When you launch this app it opens in landscape orientation and directly opens the camera with camera options laying on the bottom of the screen. First to the right bottom center, it has a timer button with a count written at it. This button is to capture a sequence of shots. The counts indicate the number of shots it going to capture. You can tap the button again to cycle through all the shot count it offers i.e., 3, 5, 7, etc. This way, you can easily capture multiple shots with this app.

Camera MX is a popular app in the list of the best free third-party camera apps. It packs lots of features and constantly being updated with new ones. This app has a “Shoot-The-Past” feature which lets you go back to the picture and select the other better shot captured at the same time.

What this mode basically does is it takes a sequence of shots before the actual capture. In the gallery, it shows you the shot taken at the moment when you tap the capture button. But, you can cycle through all the other shots it took, select the best one and save that instead of the current shot. This way, you can sort of go back and select the perfect shot. It works nicely for action and other fast or moving shots. Apart from that, it also has some basic color correction, HDR, and timer features which help you capture the perfect shots. 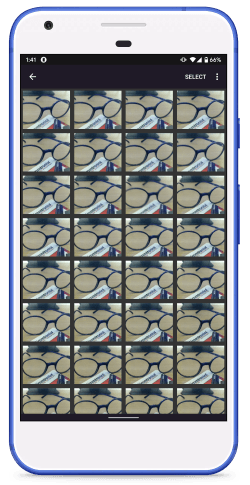 Upon capture, it shows you a sequence of photos it captured during the time you were holding the capture button. You can browse all those photos and choose the best shots out of that. So many sequence photos will also come handy to create an animated GIF of the whole shot.

These are the 3 free Android photo sequence apps that you can use to capture the action and moving shots with ease. The availability of continuous sequence photos of your shot gives options and variety to choose the best photo. Apart from these apps, you can also use burst mode photo apps to capture photo sequences.