In this article, I’ll cover 3 free Android apps to take photos at regular intervals automatically. There are very few Android apps which offer such functionality. The apps I covered here are a bit old and haven’t been updated since a year or so. But, all of them work fine and you can use them to capture a sequence of shots at any given time.

To capture photos at regular intervals with these apps, you have to set the capture configurations first. In the configurations, you can set how many photos you want the app to capture and at what interval. Apart from that, you can also toggle the flash and enable focus while capturing. One of these apps works in the background and thus let you minimize the app and even lock the screen. Rest of the two apps needs to be in the foreground and running with screen on in order to work. With that, said dive in the list and check these apps one by one. 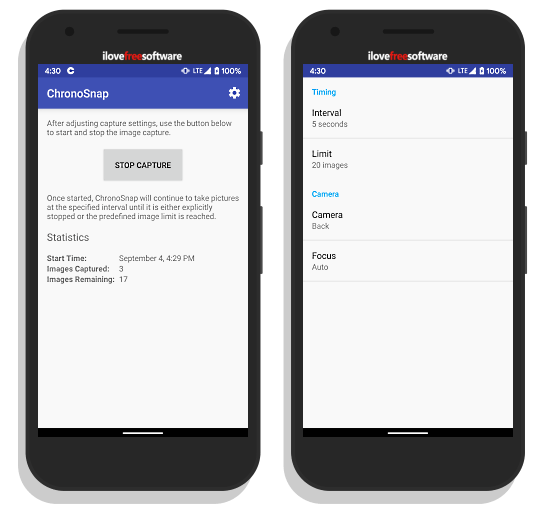 ChronoSnap is a free Android app that lets you take photos at regular intervals automatically even when the screen is off. This app is no longer available on the Play Store. But you can either download it from F-Droid or get the APK from the internet.

ChronoSnap lets you set the time interval between photos and number of photos you want to take. For example, if you want to take 60 photos in 5 minutes, you can set the time accordingly which would be 5sec interval and 60 number of photos. Also, you can choose which camera you want to use and do you the camera to focus or instantly take the shot. After defining these configurations, simply click the “Start Capture” button from the app and it’ll begin the snapping. Do note that, if you enabled the focus and app unable focus due to obstructions or distance, it’ll stop the capture.

This app works in the background, once started, you can minimize it and use your phone. You can also turn off the screen and lock your phone if you want; it’ll still take the photos. 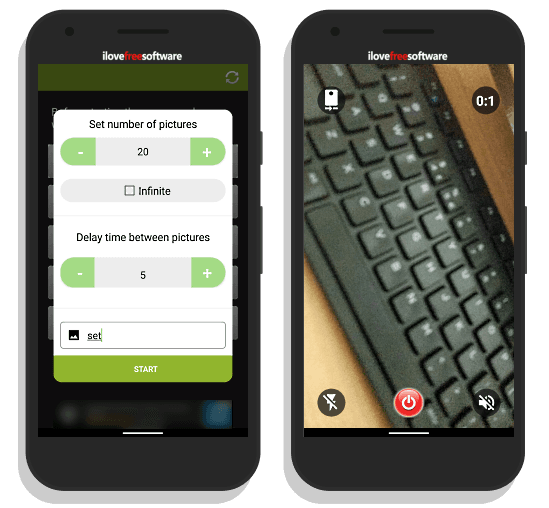 Photo Shooter is another free Android app to take photos at regular intervals automatically. This app is available on the Play Store, you can install it from there. When you open this app, it asks you to set the number of pictures you want to take along with the time interval between photos. You can also enter a name for the photos; all the photos will be named subsequently numerical increments with that name.

After configurations, you can start the snapping process. Unlike ChoronoSnap, this app opens the camera viewfinder on the phone i.e., it doesn’t work in the background. To use this app, you have to keep it running in the foreground with the screen on all the time. And, from the viewfinder, you can toggle camera, shutter, and flash before and while capturing. You can also stop the capture at any point. 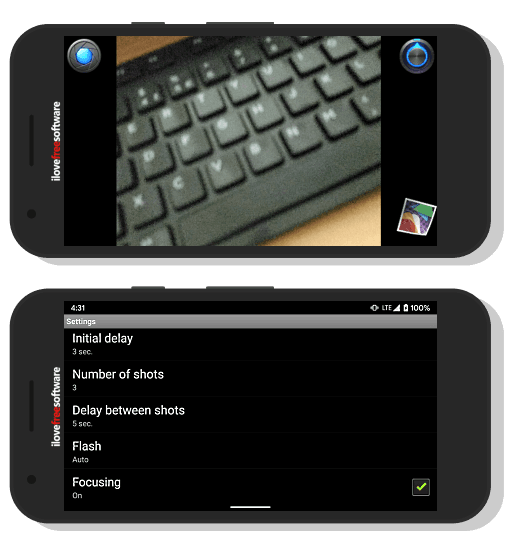 Photo Suret is another free Android app that you can use to capture photos at regular intervals. This app is available on the Play Store but it was built for older versions of Android and hasn’t updated in years. But, it worked on all the devices I tested in on running Android Pie and Android 10.

Photo Suret runs in the landscape orientation. When you open the app, it shows you the camera viewfinder with buttons to start the capture, open app settings, and view the gallery. From the app settings, you can number of shots you want to capture along with time delay between the captures. You can also set an initial delay to the capture from here and toggle the flash and focus. This app also needs to be foreground to capture the photos; you can not minimize it or turn off the screen. If you do so, the app will stop the capture.