For now there is no official Gmail App For Windows 8; but it seems that third-party apps are coming up that provide you with the ability to interact with your Gmail account.

Gmail Touch for Windows 8 is one such app that enables you to interact with your Gmail account with complete ease in Windows 8. The app seems pretty basic for now but it is able to deal with much of the needs of a common user. For now this app supports only a single account which is a limitation of the app. 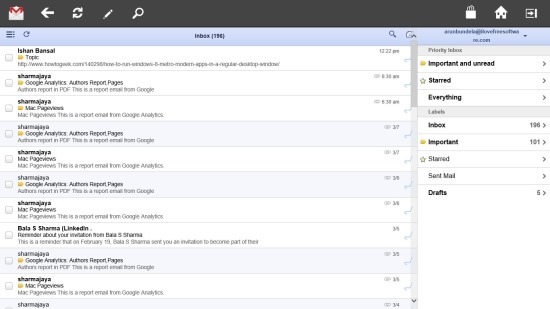 The app offers you the ability to view your inbox, search through the mail, and compose emails. The developer has said that new features like view unread messages count, toast notification, and even shows you a live tile of your account on the start screen in Windows 8 will be added in the upcoming versions of the app. So as per the promise I believe the future versions of the app will be quite capable.

The interface of the app is pretty much similar to the mobile view of Gmail but none the less this app being one of the first Gmail app for Windows 8 is an achievement. Until Google releases an official app for Windows 8 Gmail Touch is quite a nice alternative.

You can download Gmail Touch app for Windows 8 from the link provided at the end of this post. After you have installed this Gmail app for Windows 8 from the Windows Store just click on it’s tile to open up the app and a login screen will be prompted in front. This looks like the regular Gmail login, now all you are supposed to do is login into your account using your Gmail credentials.

After this you will have the interface in form of the first screenshot of this post. Here your inbox will be seen on the left side of the app and the labels will be shown on the right side of the app. Which is a little different because we all are in the habit of seeing the labels on the left side in any mail client but non the less the app functions without any problem. 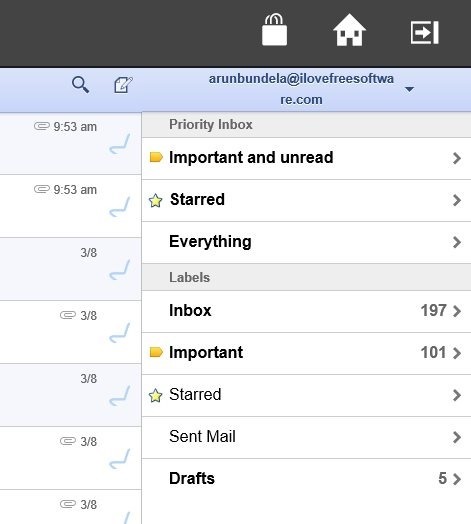 While you are using the app you will have an option menu at the top of the app window as shown below in the screenshot. This option menu provides you with the ability to quickly access most of the common tasks like back, refresh, compose, search, logout etc. with just a single click. What each of the button does is aptly explained in the screenshot below.