Once installed, a small document like icon appears just next to the URL of Google Chrome.

Whenever anyone make changes in Google doc, it will display a number in red just on the icon itself. It clearly displays the number of alterations that have been made to a particular document. The extension tracks every single change that has been made in a document, thereby giving you a notification. 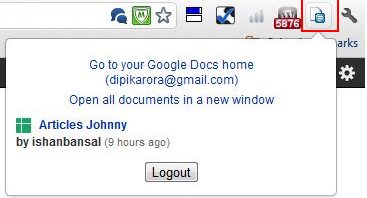 It is an effective way to oversee Google Docs for modifications without checking each Google doc time and again.

How to Monitor Google Docs for Changes:

Yup…its done. Now you can work with a good relief. However, if you do not have Google Chrome installed on your PC, you need to first download Chrome and thereafter, you will be able to use this WatchDoc service. If you don’t want Chrome, you can check out Google Docs Notifier for desktop.

In a nutshell, WatchDoc is a utility Document Monitor powered by Google chrome, which saves your time and give you a relief. You can work on your other documents with any regular check on “to be modified documents” because its time for WatchDoc to give you all such notifications. Go ahead, get it right away and monitor Google docs