AltMove is a free Windows software to move, resize windows that can’t be natively moved or resized. You can set a keyboard+mouse button hotkey to resize and move any software or application. There are plenty of other software to resize windows but I am really fascinated by the fact that it can move those software or application windows that simply don’t allow you to do so. Irrespective of the software type, it can move and resize their interface to any part of your desktop with just a simple hotkey. Additionally, it also lets you set hotkeys to launch programs, hide windows, change the transparency of a software interface, etc. Working with this free mouse manager is also pretty easy due to its intuitive interface and with just a few steps you can configure it to perform any set of supported action like move and resize windows by their respective assigned hotkeys. 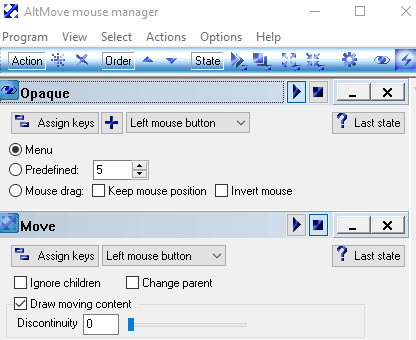 How to use this free software to move, resize Windows that can’t be moved or resized:

As I mentioned, you can set different hotkeys in AltMove to move, resize windows, and other supported actions. You can download AlMove from the link provided at the end of this review and execute the downloaded EXE file. You will then see its main interface as shown in the screenshot above. There are a couple of preset actions that come preconfigured but you can delete them if you just want to see the actions of your interest on its interface. Apart from resize and move windows, it can run programs, open files and folders, change the transparency of windows, emulate keystrokes, magnify windows content, etc. Just add any of these actions, apply some tweaks (not required for most actions), and specify a hotkey to perform those tasks on the fly. For hotkeys, it lets you specify a modifier key (control, alt, shift, Windows) and a mouse button (left, right, middle, etc).

Step 1: Add a new action from Actions>>New… option. It then displays a dialog box which shows all the supported actions, select the first action i.e. Move window and then click on the OK button. 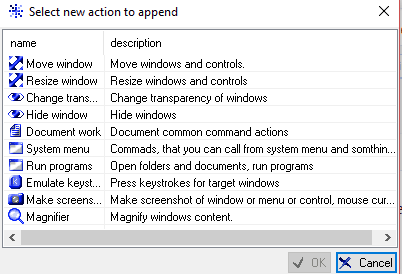 Step 2: You will then see a new panel on AltMove interface as shown in the screenshot below. Now, specify a hotkey which is a combination of a modifier key plus a mouse button and then, click on the Play button to turn on its state.

Now, you can use this hotkey on the immovable software interface to move it around your desktop. In the same manner, you can add other actions and use them by assigning different hotkeys.

Other noteworthy actions that you can perform by simple hotkeys using AltMove are:

AltMove is a free software to move and resize windows that can’t be resized and moved. If you have some games to resize their interface or some stubborn software that can’t be moved then AltMove will surely come to the rescue. I will definitely recommend you to try it as it is quite fast, easy to use, and deliver what it promises.