Unlocker is a free file unlocker that lets you easily delete, copy, move, or rename files that have been blocked by certain applications. It’s a handy and lightweight tool that helps you to get rid of “can not delete files” or similar errors, by killing processes that block certain files on your system and making sure that the file you are trying to access is not currently in use. Unlocker offers shell context menu integration and allows you to easily unblock selected files and delete, move, copy, or rename them with few clicks.

We have earlier reviewed some similar tools, and Unlocker is another addon to the list. Though the app is capable of performing instant unlock operation for the above mentioned events, if it fails in doing it immediately, it does it in the next system reboot. 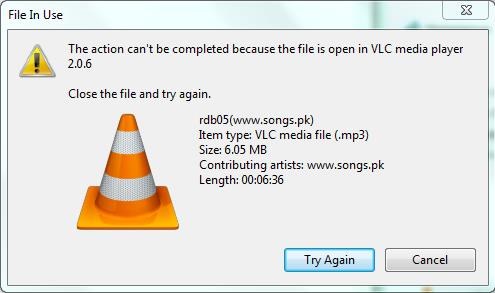 Unlocker is available as a free software and can be downloaded using link given at the end of this article. Once you install this tiny file unlocker in your system, you can easily access it through the shell context menu to unblock files you want to modify that are used by other user/programs on your system. Let’s see how how this can be done.

After installing Unlocker in your system, whenever you see a “Can’t Delete: Access Denied” or similar kind of errors when you try to delete, move, copy, or rename a file on your system, just right-click on the selected file and choose “Unlocker” option.

This will open a program window listing all processes which are currently using the file and blocking its access. You can kill processes from here, release files without performing any action, and later perform the desired action on the file.

However, Unlocker lets you directly delete, copy, move, or rename files within the app’s interface by choosing the respective option from the “No action” drop-down. 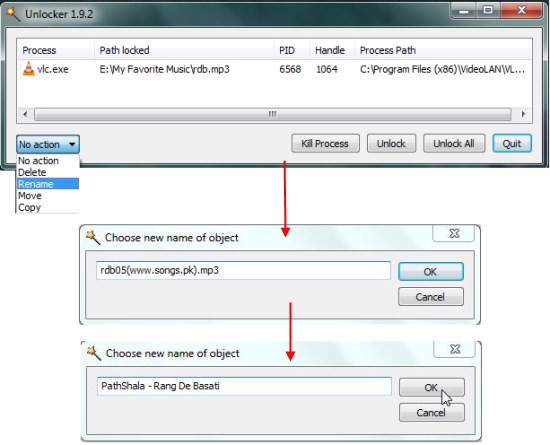 Note: Don’t forget to append the file name with file type extension if you rename the file.

Unlocker is a nice free app to unlock blocked files and a must have tool for Windows. It’s a useful tool for instantly killing processes and releasing files used by other users or programs, and easily deleting renaming, copying, or moving files with blocked access. Download free and try it out.