Airfarewartchdog is a free iPhone app to get alerts when flight prices falls. You can use the app for getting alerts for price drops of flights for a particular departure airport as well as for any particular route. The app also lets you compare flight prices across different travel websites like TripAdvisor, Orbitz, Cheap-o-air, etc.. You can compare the prices from within the app, by taking any 3 websites in one go. Apart from getting alerts, you can also use this app to check daily flight price deals for departing airport or any specific route.

The app also lets you bookmark any of the route or deal for future deal. You can even share any of the deal with others via email, Facebook, or Twitter. While finding flight deals, you can also provide number of travellers, for getting more accurate and best deals. 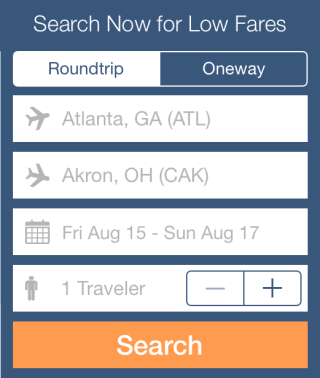 Note: This app lets you set departure airport from United States only, while you can set the arrival airport of any country in the World.

Using this iPhone App to Get Alerts When Flight Price Falls:

When you launch this app, you will be asked to provide email address for getting alerts, but that is optional. You can continue using the app even if you skip this part. The app’s main interface is displayed in below posted screenshot. You can see that there is a text box for entering the departing airport to find best flight deals. While entering the airport name, do remember that app accepts only airports of United States. It suggests name of airports as you start typing the name. 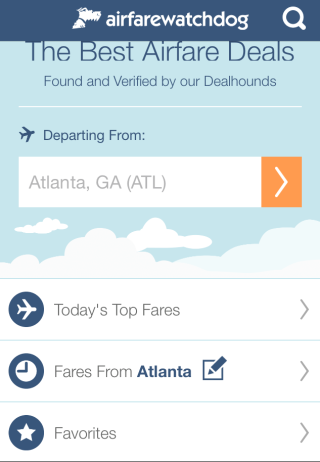 On entering the correct name, you will get best flight deals on next screen.  If you want to get alerts about this airport, then tap on Star icon at top to mark it as Favorite. You can see that there are various deals on the screen. You can also sort these deals on the basis of fares and destination using the options at bottom. 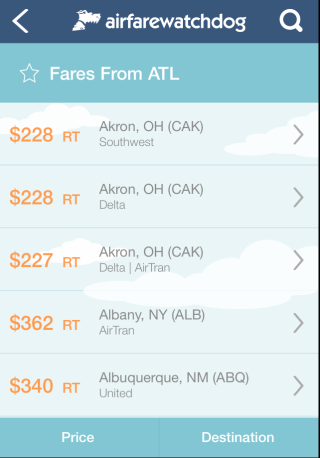 Tap on the deal you like to get more info about it. You will see the name of airlines offering deal and advance purchases limit. Tap on More Details to get extra info regarding the deal, like the terms and conditions for availing the deal. You can also look for other deals on various travel websites by providing your arrival, departure date, and number of travelers. 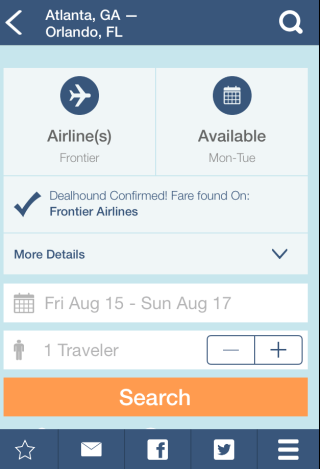 The app displays different available websites from where you can check for other deals. Swipe to check them all and tap to go to any particular company. You will see that some of the company has a magnifying glass made on them while some has telephone. The telephone ones are those in which you have to call them to know about deals, while magnifying glass ones are those which you can open within app to know deals. 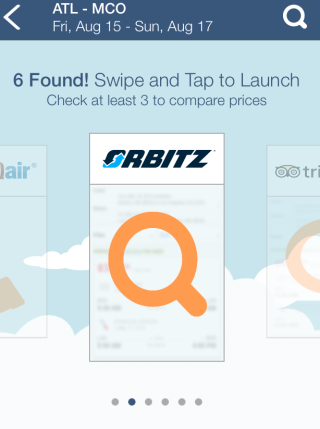 If you want to get deals for a particular route, then tap on search icon at top right corner. Enter the departure and arrival airport, date of travelling, and number of passengers. You also have to select whether it’s a roundtrip or one way trip. Tap on Search to get deals.

Other Options of this iPhone App:

You may also like: 5 Free Flight Booking Apps For iPhone.

Airfarewatchdog is a good app to get alerts when flight prices falls. The app worked fine for me and it really displayed some really cool deals across various airlines. I wished that they expand and provide feature of entering any country’s airport as the departure airport, instead of only United States. Do give it a try.