XFDF is a special type of file that contains the PDF forms and annotation information of a PDF in XML form. XFDF files are used to keep the comments, annotation, and PDF form data separately. But if you want to open these files separately, then you will need some software to do that. And in the following list, I will discuss 5 such software to do it. 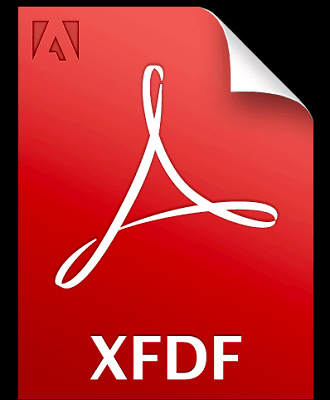 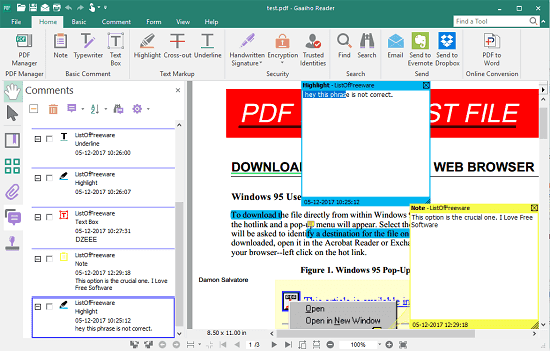 Gaaiho PDF Reader is one of the best free XFDF viewer software for Windows. When you install this PDF viewer software in your PC, then it will by default assign XFDF files to be open with it. You can see all the annotation data, comments, highlights, and other PDF forms data easily. In addition to that, you can also edit the information in XFDF file in the same way you edit PDF files. However, when you are working on an XFDF file, you will need the original PDF file of which the XFDF is a part of. Otherwise, the data will not show up correctly.

You can use Gaaiho PDF Reader in the same way you use other PDF reader software. Just double-click on XFDF file and it will open that for you. You can see all the data like comments, notes, highlights, and PDF form data. And it shows the list of individual elements on the right side of the software. You can choose any element from the list and view it on the interface of this PDF reader software. If you want, then you can also edit the comments, other annotation within the PDF and save changes in the current XFDF file. 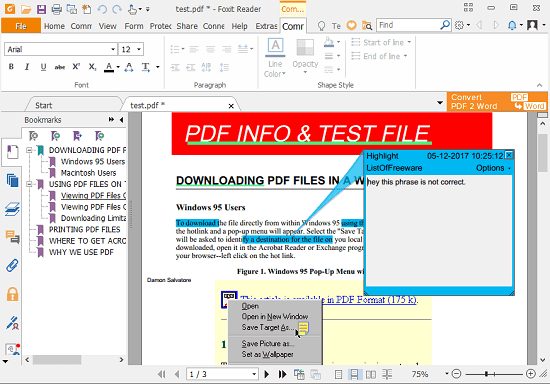 Foxit Reader is another free PDF reader which is a popular one after Adobe. It is a good XFDF viewer and it allows you to edit those files as well. Foxit Reader is a feature rich PDF viewer software that has a large number of tools related to PDF annotation and editing. You can use it to edit XFDF file and see forms and other annotation elements in that. After making necessary changes, you can save the changes in the same file. Foxit Reader natively supports XFDF files and automatically associate them so, you can easily open them.

There is nothing so much difficult to open an XFDF file using Foxit Reader. After the successful installation, you can open any XFDF file and view it in any way you want. You can analyze all the annotations and other form elements. Also, you can edit them if you want and save the changes in the file itself. Foxit Reader makes it pretty simple to help you manage XFDF files. And since it is a tabbed PDF reader, so you can open multiple XFDF files and work with them at the same time. 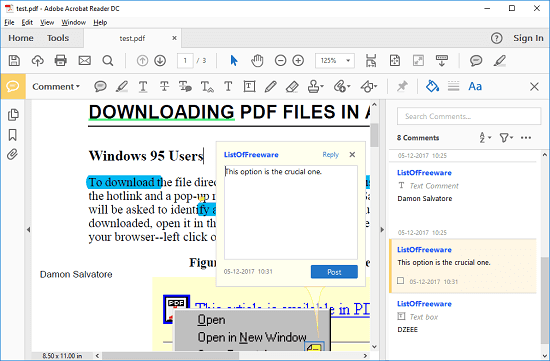 Adobe Acrobat Reader DC is another free XFDF viewer software that you can use. Actually, it is the most known software to open, read, and create PDF files. Along with all this, you can open an XFDF file in it and visualize it in any way you want. It lists all the annotation and other components to you and allows you to view them individually. You can easily see all the data stored in an XFDF file and edit it if you want. The software is very powerful when it comes to dealing with XFDF files. And Adobe is the one that invented the XFDF file format.

Using Adobe Acrobat Reader DC to open and view XFDF files is very simple. It doesn’t really set the file association if you already have a PDF reader like Foxit installed on your PC. You can open an XFDF file using the File > Open menu or by using the “Open with” context menu option. After that, it will open the XFDF file and you can start doing what you want. You can edit the components if you want and save changes in that. 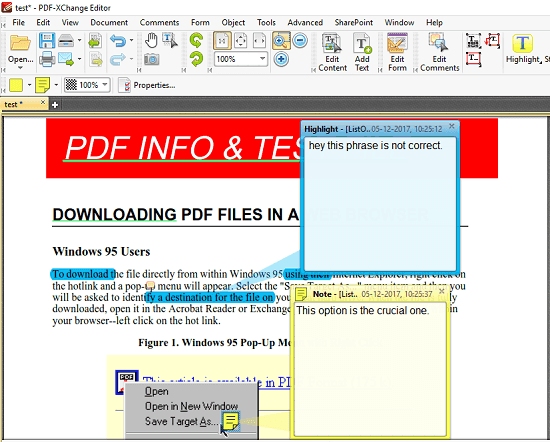 PDF XChange Editor is another very good XFDF viewer. Just like other software in the above list, it is a very advanced software to deal with PDF files and their editing. It can easily open an XFDF file and shows all the information from that. You can see all the annotations, comments and PDF form data through it and edit it. Open and view an XFDF file and do whatever you want. It is a feature rich software and it can open files side by side so you can open multiple XFDF files and compare them.

PDF XChange Editor also comes as a portable software. If you want to use this software without installation, then you can do that. After that, open an XFDF file in it and it will show it to you along with data like comments, highlights, annotations, and forms. You can open multiple XFDF files in it and visualize them at the same time. You can also edit those files if you want and it lets you save changes in the same file. 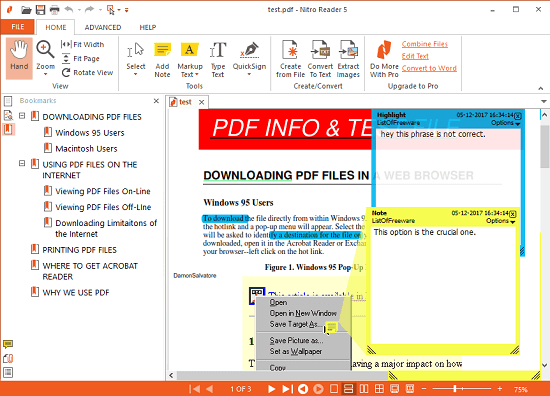 Nitro Reader is the last free XFDF reader software in my list. Just like the other software that I have mentioned in this list, this PDF reader can also easily open XFDF files and lets you edit them as well. Not only this, being a tabbed software, you can open multiple XFDF files in it and then work with them at the same time. It comes with an intuitive interface and you can easily view, open, and edit XFDF files.

Using Nitro Reader to manipulate XFDF files is pretty easy. Just open the XFDF file with it and it will show you all the data. You can start manipulating the XFDF files. After you have opened the file, then you are free to do anything you like. It lists all the components in the XFDF file and lets you visualize them separately. If you want to make some edits in the comments and annotation part, then you can do that.