Here are 5 free mixtape maker software for Windows. Using these software, you can easily create mixtapes or a compiled playlist of your favorite songs. They are pretty simple to use and can create a mixtape in no time. To create a mixtape, all you gotta do is open these software, choose the audio tracks, and the mixtape can be exported to your PC. All of these mixtape makers let you export mixtapes as M3U playlists. You can then play the mixtapes using any of the media players that support M3U file.

You can use each of them to create as many mixtapes as you want with unlimited music tracks. The best thing about all these mixtape maker software is that they come with an intuitive interface making it very convenient for you to create mixtapes without much effort. So, start creating mixtapes for specific music genres, artists, etc. If you don’t want to download or install anything on your PC for creating mixtapes, then do not worry as we have also covered some of the best free websites to create mixtapes online. 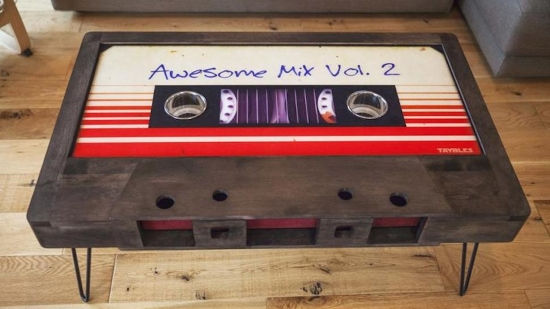 Let us get started with the mixtape maker software.

Random MixTape Maker is probably one of the best free mixtape maker software for Windows. You can use it to create mixtapes with unlimited music tracks in no time. You can simply open this software, choose tracks (in almost any audio format), and generate the mixtape playlist. It lets you create as many mixtapes as you want. There are some additional features as well like you can limit the mixtape duration, assign a genre, and so on.

How to Create a Mixtape using Random MixTape Maker:

Step 1: To get started, simply install this mixtape maker on your PC and open it up. Under the “Search directories” tab, you will see the option to import music tracks using which you want to create the mixtape. So, simply select the directory which contains the tracks and then click on the “Create Playlist” button at the bottom.

Step 2: As soon as you do that, all the music tracks will be fetched from the folder and will be shown on the window. You can either use them in the pre-defined order or shuffle them by clicking on the “Shuffle Playlist” button.

Step 3: When you’re all set, simply hit the “Save Playlist” button at the bottom to save the mixtape. This one allows you to save mixtapes as M3U playlist files. You can then play the mixtapes on PC with any media player that supports M3U files.

Playlist Creator is another useful mixtape maker software which you can use to easily create mixtapes on Windows PC. This one also allows you to add as many music tracks as you want in a single mixtape. The tracks can be of any audio format that you can add to your mixtape. Apart from that, you will also get various options to reorder tracks, customize title mask, etc. It is completely free for creating unlimited mixtapes.

How to Create a Mixtape with Playlist Creator:

Step 1: After installing this mixtape maker, open it and then you will see the option to add music files on the left of the window. You can either import specific audio files, an entire folder, or pre-created playlists for making the mixtape. 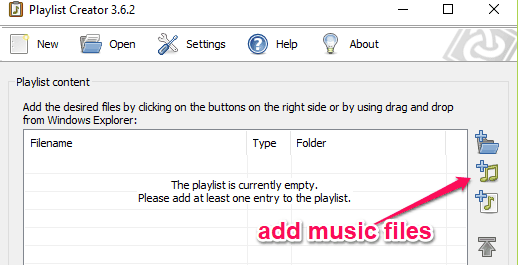 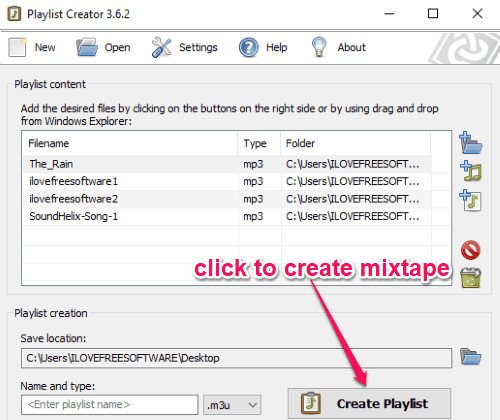 Audio Playlist Maker is also a free mixtape maker for Windows which can be used to create mixtapes with your favorite music collections. Similar to Playlist Creator, this one is also super simple to use as you can simply open it choose audio files, and then it will automatically generate the mixtape that you can save and play on your PC. Create as many mixtapes as you want for free and with unlimited tracks. 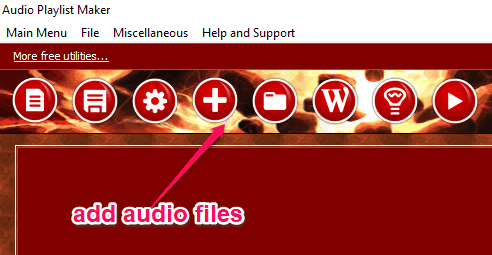 Step 2: Once you’re done selecting audio tracks for the mixtape, you can go ahead and hit the “Save” button at the top. When you do that, it will allow you to choose any directory and save the mixtape as an M3U file. Unfortunately, it doesn’t have the option to reorder the added music tracks. So, before importing tracks, make sure you select them in the exact sequence which you want in your mixtape. 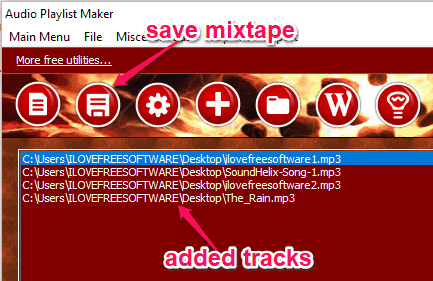 sPlaylistMaker is also one of the best free mixtape maker software for Windows. You can use it to combine all your favorite songs into a mixtape and then export it as a playlist. You can then play it using any media player on your PC. This software also doesn’t have any limitations on the number of songs you can include in a mixtape. It is very easy to use as you can simply configure some option, drag and drop music tracks, and the mixtape will be saved automatically.

How to Create Mixtapes with sPlaylistMaker:

Step 1: First, install sPlaylistMaker on your PC and then open it up. After that, you can go ahead and configure the mixtape options in the main window. You can add a name, choose the output location, path type, write type, recurse subfolders, and so on. 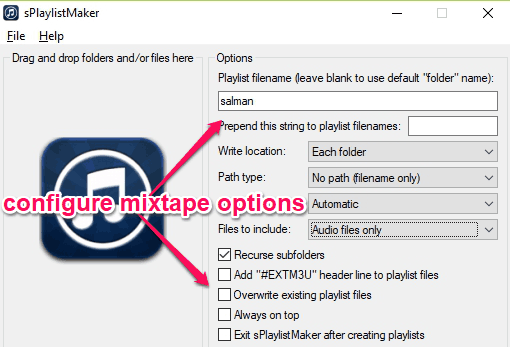 Step 2: Once you’re done with the mixtape options, you can proceed and drag and drop audio files on the left panel of the window. You can also drag & drop folders to include all the audio tracks at once. As soon as you drop the tracks, it will automatically use the configuration and save the mixtape as an M3U file. It also supports M3U8 output.

You can read more sPlaylistMaker from here.

Playlistmaker can also be used to create mixtapes with ease. You can simply open this software, add the required audio files, and create a mixtape out them instantly. It allows you to add as many audio files as you want in one mixtape and export it. There are various output formats available for the mixtapes. One of the unique features of this software it that it allows you to join multiple mixtapes or playlists into one.

How to Use Playlistmaker to Create Mixtapes:

Step 1: After you install and open this software, click on the “Make New List” button at the top. Then it will ask you to choose the output format of the mixtape. You can either choose WPL, ASX, PLS, M3U, M3L, or TXT format. 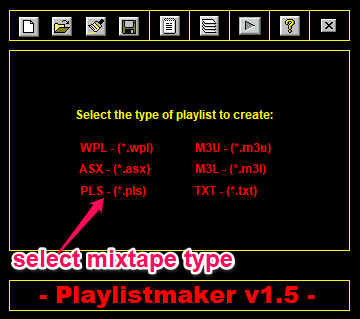 Step 2: Once you do that, click on the “Open/Add File” button at the top and choose the audio files that you want to include in the mixtape. After you’re done, click on the “Save” button to export the mixtape in the selected format. Before exporting, you can also change the order of the tracks in the mixtape by using the arrow icons on the right or sort them alphabetically. 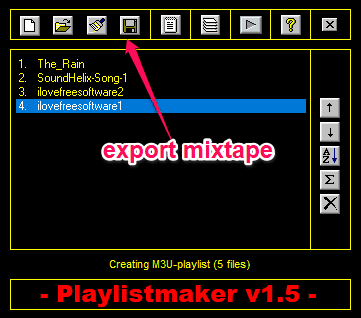 These are some of the best free mixtape maker software which make creating mixtapes from audio tracks a breeze. No more using any complex audio editor to combine audio files such that you can play them together. Personally, I like each one of them as they are very easy to use and does the job pretty well.

I hope you find this list of mixtape maker useful.