Here is a free Lullaby Android app that detects the child’s movements while sleeping to play lullaby automatically. How this app works is you install and turn on this app, then place the phone on your babies cot. Now when the baby moves the cot will also move and the app will detect movement. As soon as it detects movement the app will start playing a lullaby to make the baby sleep.

Once the app called Auto Lullaby Player is installed, you will see four lullabies (Lullaby Goodnight, Pretty Little Horses, Rockabye Baby, and Twinkle) after opening the app. You can select any of them. Also, you can add custom lullaby from your phone. Once you select the lullaby to play, you can turn on the lullaby player. After that, it starts the time with 60 seconds and plays a lullaby. You can adjust the sensitivity of your child’s movements. To set the sensitivity, you can use the slider from low to high. The app works amazingly as it starts playing the lullaby just by detecting the movement of the child.

Toddlers usually disturb their parent’s sleep by crying. And then the parent has to get up in middle of the night to calm the child and make them sleep again. But this lullaby player app is so helpful as it detects if the child moves while he/she is sleeping and starts playing lullaby automatically. The lullabies are so melodious to listen, that they will put the child to sleep with the soothing music. We have also covered an article where you can track the child’s growth and development by using an Android app.

To make the baby sleep, you need to download this Android app named Auto Lullaby Player. After opening the app, you will see four lullabies on the homepage. The four lullabies names are as follow:

Here, the last one (Custom) is not the name of any lullaby. Clicking on custom means you can add any lullaby, music, melody or other audio files that are available on your phone. 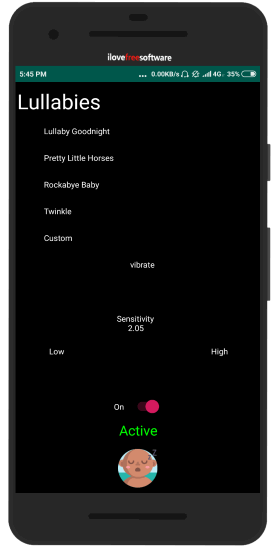 There is a sensitivity option in the middle of the homepage. This sensitivity is for the movement of a child. Which means, when the child moves while sleeping, the app automatically starts playing lullaby which you have selected before turning on the lullaby player. To adjust the sensitivity from low to high, you can use the slider and manage the sensitivity. The recommended sensitivity is 2.5.

Apart from lullabies, there is also a vibrate option. Using vibrate option won’t play any lullaby. Rather, it will vibrate the phone instead of playing a lullaby.

To make your baby sleep peacefully, you can turn on this app and place in your toddler’s cot. Once the baby moves, the cot will also move, giving the app the indication that the baby is moving, and this lullaby player plays lullaby automatically. And, parents can sleep peacefully as well.

Auto Lullaby Player is a great app not just for babies but also for parents. Using this app, parents don’t need to wake up in the middle of the night as this app works wonderfully. Also, the child can sleep well listening to these soft lullabies.