Luna Launcher is a free Parental Control app for Android in which you can restrict apps the kids can use and specify time limit kids can use your phone. If your kids use your Android device more often and you want to take control over how they use your device then you can try out this free Android launcher app for kids. It lets you create multiple kids profile, select allowed apps to run on that profile, and specify a time period for which they can access these apps. After the limited time is over, your kids won’t be able to use any app on your Android device.

The best part is that it will turn your Android device into a Kid’s home screen, as you can see in the main screenshot. This kid home screen will just show apps that you have selected for your kids to use and prevent your kids from accessing your device settings, its notification, and status bar area. 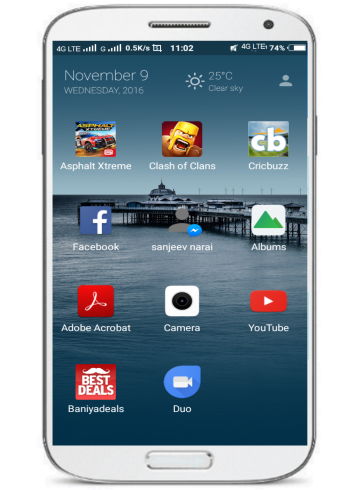 How to use this Android Parental Control App to restrict their apps usage:

Luna launcher gives you full parental control by which you can choose apps that you want your kids to use and for how long. As I have already mentioned, it lets you specify a time (per day) for which your kids can use selected apps. After the time period is over all apps are blocked automatically and your kid will not be able to use any of them. However, you can mark some apps as whitelisted that will not be blocked after the time limit is over.

Another exciting feature of this free Android launcher for kids is that it gives you a full control as a parent. You can protect it with a password so that your kids can’t change its settings and even prevent kids from accessing notification area and status bar of the device.

If there are many kids who use your phone, then you create multiple profiles for each kid using this Android app. You can also view how much time your kids spend on a particular app using its App usages tracker.

Let’s now see how you can configure this Android launcher app for kids to limit and track their app usage:

Step 1: You can easily get started with this Android app; download it from the link provided at the end of this article. When you open this app for the very first time, it will guide you to create a profile for your kid and select apps that will be allowed to run in that profile, as shown in the screenshot below. 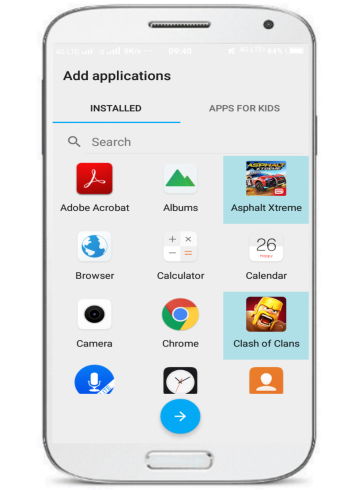 Step 2: Now you can specify a time limit for apps usage from its Settings>>App usages tracker>>Time per day. Let’s say you have specified it to 1 hour then your kid will be able to access all apps from the kids home screen for just an hour per day. 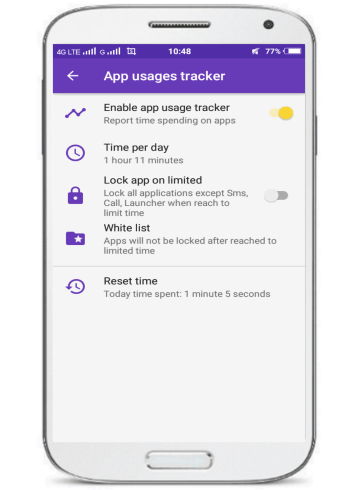 After an hour, all apps will be automatically blocked by it and your kid won’t be able to use them.

There are many parental control apps for Android, but most of them focus on monitoring what your kids do on your phone. However, I like concept of Luna Launcher more as instead of reporting later what your kids did, it can directly control the apps that they can use as well as time that they can spend on Android. So, instead of letting you know after a mistake has been made, it actually prevents that mistake from happening. I will definitely recommend this app to you as it gives a full parental control on Android and lets you track how much time your kids spend on a particular app.