Taskbar numberer is a free Windows application that numbers taskbar items including tray icons, so you can launch them instantly with the Windows key on your keyboard. This software also gives you the ability to voice-launch the numbered tabs with third party speech recognition software.

Switching program windows on the taskbar is normally easy using the Alt+Tab hotkey. But it can take some time if you’re juggling between two or more tabs with other windows inbetween. You’ll also have to keep the pressing Alt till you find the program window you are looking for.  Now with 7+Taskbar Numberer, you can launch any taskbar tab easily with one hit.

You get a variation of commands too. You can launch a new instance, open jump list, open last active window with the varying commands of 7+ Task Numberer.

So let’s take a better look at 7+ Taskbar Numberer. You can also check out this beautiful Windows Quick Launch Toolbar if you want a speedy experience of Windows 7 or Windows 8. 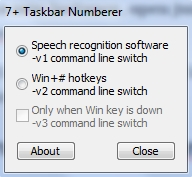 You’ll notice that the program tabs on taskbar are numbered. To switch to a particular program, hold down the Window key and press the number assigned to that particular tab. If the program isn’t already open then it will launch the program.

Just like the television channels, you can now switch to the last window you were watching with help of 7+ Taskbar Numberer. Hold the Windows + Ctrl key and press assigned number of the program tab.

The Jump list of a program pinned to or opened on the taskbar shows recent and most opened files on that application. It can be accessed by right-clicking on the program at the taskbar. To launch it using 7+ Taskbar Numberer, hold Alt+Windows keys and press the assigned number of the program whose jump list you want to see.

How to Add 7+ Task Numberer to Windows Startup

As you can see 7+ Taskbar Numberer has proved to be quite handy. This is specially tailored for people who can’t stand wasting time looking for a particular program’s tab and getting confused in the process. I’ll give this free windows tool 4 stars since it could be expanded with more features like shortcuts for desktop icons. Hope the developer also codes it to be integrated in the startup instead of the user doing it manually.

Know a better alternative to 7+ Taskbar Numberer? Share it in the comments!