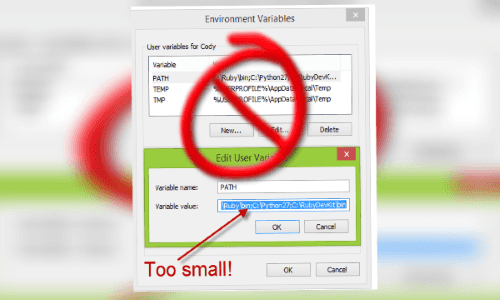 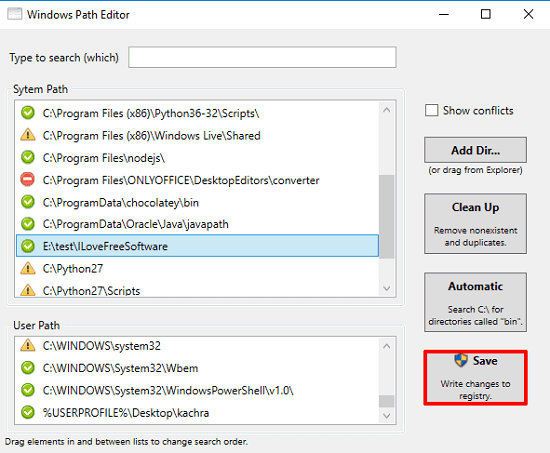 WindowsPathEditor is one of the best free software to edit path environment variable. The software shows all the values set in user’s as well in system’s path environment variable. It highlights the invalid paths and also helps you remove duplicate paths if present in the variable. It allows you to add, edit and delete new entries in the path variable easily. For adding a path, you don’t have to copy paste it, just locate the folder from the software itself, and then it will add that path. A very nice feature of this software is that it can automatically search the “bin” folders in C drive and lists the path which contains that. And you can easily choose a path from the list to assign it to the path variable.

To use WindowsPathEditor to edit path environment variable is very simple. As you run the software, it will show you all the paths you have set so far. It will highlight the invalid paths and you can clean them with a button. Also, it allows you to clean duplicate paths if there are any. And you can edit the path variable for both; system and user. After editing the path variable, you can hit the Save button and all changes will be applied to your system. 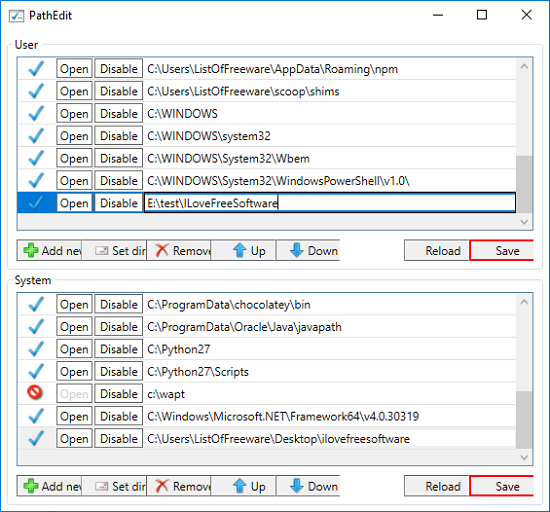 PathEdit is a free Windows path editor software that you can use to add, edit, and delete path variable strings. It comes with an intuitive interface and lists all the path entries from user and system path variable. It can show the invalid paths and mark an error in front of them. You can easily enable or disable an entry and add a new one if you wish. It makes it very simple to add new path. You just have to select a directory by browsing it and then it will add that to the path variable.

PathEdit comes as a portable software to edit system path environment variable. As you open it, it quickly shows the list of paths you have configured on your PC so far. You can select anyone and start editing it. Or, you can also add a new entry in it if you want. The software shows the list of paths configured for user and system in two different sections. Based on what you need you can configure paths accordingly. When you save changes, then they will appear in the system settings as well. 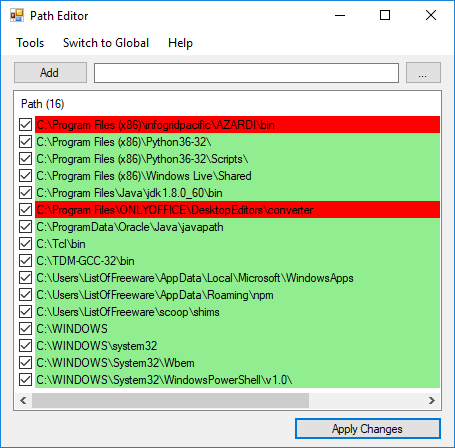 PathEditor is a simple and free Windows path editor software. It allows you to add, edit, and remove paths stored in the path variable. You can edit the path variable for both system and user and it comes with some other features. You can use this tool to locate invalid paths from the list and you can remove them. Also, it allows you to save a backup copy of the list of the entries to a TXT file that you can import back later.

Run the software after you download it and then it will list path variable entries. It puts a check box in front of each entry and you can easily enable or disable that. Also if you want to add a new entry in the list, just enter the path in the text box and then hit the Add button. However, you can make changes in the user’s path variable by default. If you want to manipulate system’s path variable, then you will have to run the software in administrator mode. 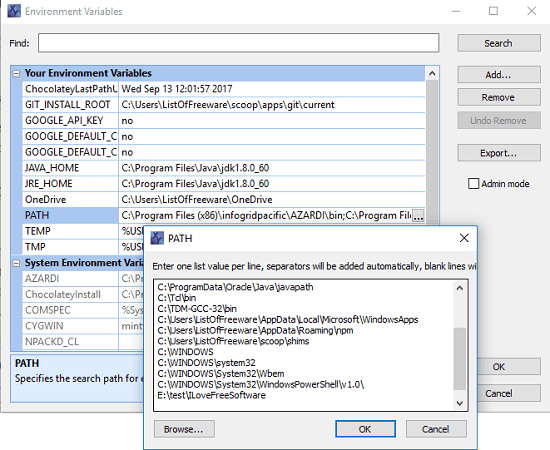 Just like other software, it also comes as a portable software and you can start using it right after you’ve downloaded it. So, open the software and go to the environment variable which you want to edit. You can double-click on any variable name to see the list of entries associated with it. An editor will open up and you will see the list of paths in it. You can edit them and remove them if you want. You can run this software in admin mode by checking the “Admin mode” option. After that you will be able to make changes in the system environment variables. 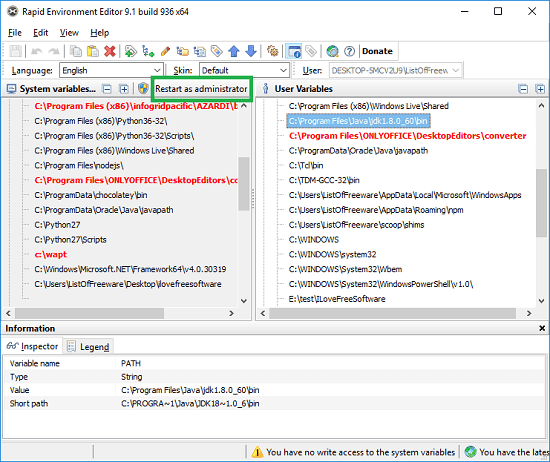 These are some best free path editor software for Windows which I have listed. All these software can help you easily add, edit, and delete path variables in a whole different way. You will not have to look for specific PC settings to do the same as these software give you a simple way of doing that. So, if you are looking for some free software to edit system environment variables, then this list will come in handy.