Peppa Pig Animated Cartoon is a Windows 10 kids cartoon which is very popular among kids. The cartoon features a cute little pig named Peppa and her family. She has a little brother named George pig. All of Peppa’s friends are animals. All friends are different species of animals. So watching the cartoon kids can also learn about different animals as well.

The Windows 10 kids cartoon app can be downloaded from the Windows 10 store or from the link given at the end of this article. When you start the app you will see an interface like the one in the below screenshot. 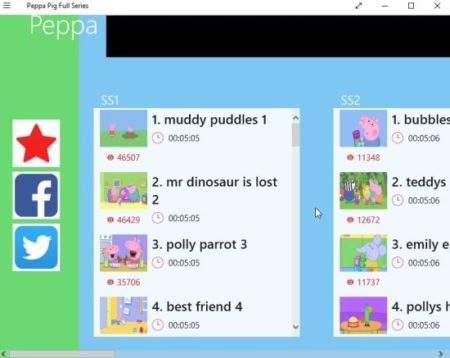 As shown in the above screenshot all the cartoon episodes are listed season wise. Season one and season two can be seen in the screenshot above. Go through the list of episodes and select the one you want to watch. You can even start with season one episode one.

Click on the episode you want to watch and it will open up in full screen mode as seen in the screenshot below. 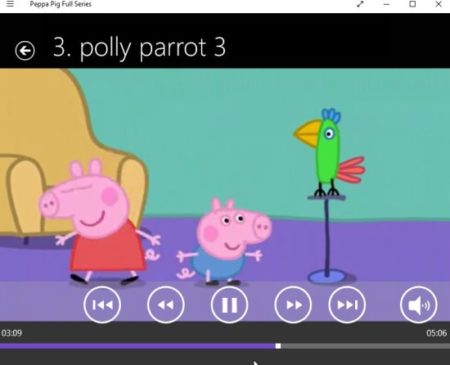 At the top of the screen will be the title of the episode and the video will start playing in this window. You will see regular control buttons on the video player. You can play, pause the video, control the volume of the video., forward or rewind the video, you can even switch to next or previous video.

On the home screen when you scroll towards extreme right, you will see a list of all the characters in the cartoon. When you click on a character, a small description of the character will be shown to you, as shown in the screenshot below. 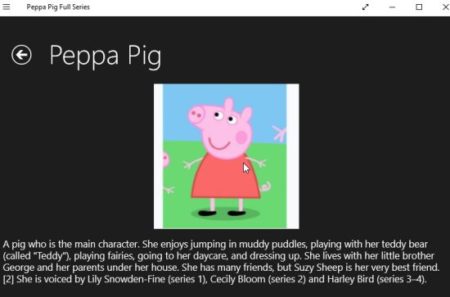 The cartoon is so popular among kids as it shows everyday activities being performed by characters like riding a bike, going to school, playing in a park, etc.

Peppa Pig Animated Cartoons are something we all have enjoyed watching from time to time. All the characters in the cartoon are quite cute and fun to watch. I started watching this series with my son and I instantly liked it with all the lovable characters in it. There are different animals in the cartoon with rhyming names like Peppa Pig,  Rebecca Rabbit, Susie Sheep, etc. Kids would really enjoy these fun cartoons. So definitely watch them.