This article covers 5 free Windows 10 QR code generator apps. QR code is a type of matrix barcode which is unique to a product, text, number, etc. There are lots of apps and websites which let you create QR codes. We will be seeing Windows 10 apps which let you generate QR codes. Most of the included apps will let you create different types of barcodes also along with QR codes. Even QR codes can be of different types like text, number, email, contact, etc.

All these apps can be downloaded for free from the Windows 10 store. Let’s look at these free QR code generator apps below. 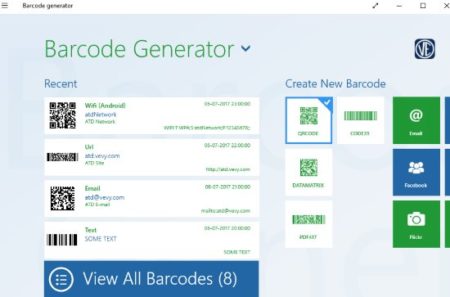 Barcode Generator is a free QR code generator app. The home page of this can be seen in the screenshot above. You can see the different kinds of barcodes that you can generate using this app like barcode, QR code, data matrix, PDF417, Code39, etc. Select the QR code option and click on create new button at the bottom right corner which will come up by right clicking on the screen. The screen which comes up can be seen in the screenshot below. 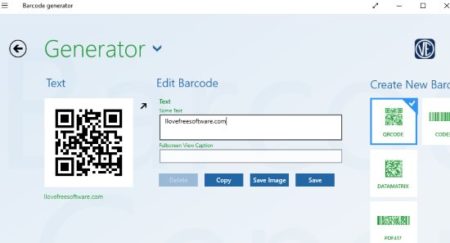 Here you have to choose what you want to include in your QR code, do you want to insert text, URL, email, phone number, Facebook account, etc. The option you select the fields will change according to that. I chose text option and got the above two fields. You have to enter your text and a full screen caption for your text. At the same time when you are entering your text you will see your QR code forming as well. You can go ahead and save this QR code on your computer by clicking the save image button. The image will be saved in PNG format. Now you can use this QR code anywhere you like. 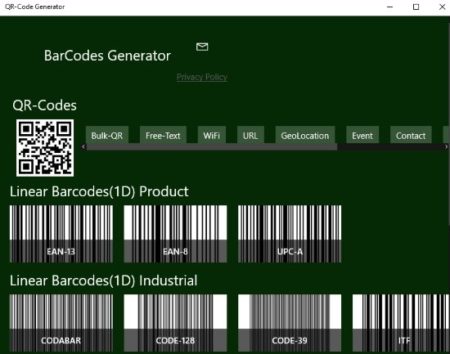 QR-Code Generator is a free Windows 10 QR code generator app. When you launch this app you will see an interface like the one shown in the above screenshot. You can create various types of barcodes like QR codes, linear barcodes like EAN-13, Code-128, ITF, etc. As we are seeing QR codes in this article so we will click on the QR codes option and you will be taken to a screen like the one shown below. 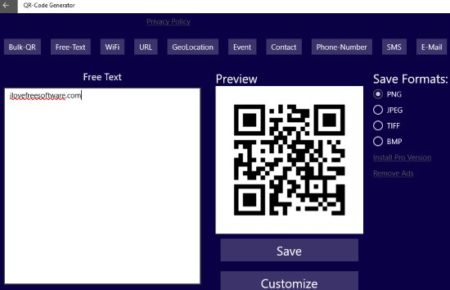 In this screen you can see the types of QR codes that you can create. You can create a QR code for text, URL, Geo Location, event, contact, phone number, email, etc. I chose the free text option and got a box to enter text into. Enter the text you want and a QR code will be generated right next to it. You can go ahead and save this QR code you created in PNG image format on your computer. The customize options and saving the image in other formats is locked in the free version, it is available with the paid version only. Once you save your QR code you can use it anywhere you like. 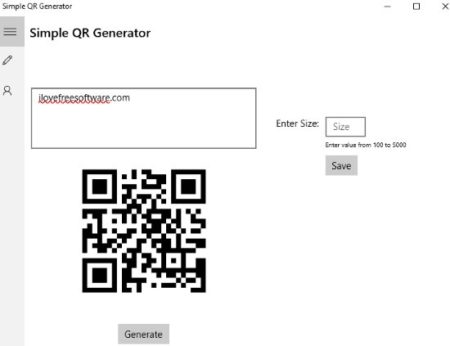 Simple QR Generator is a free QR code generator app. In this app you can only generate QR codes, as can be seen in the screenshot above. The app has a simple interface with lots of ads on it. In the given text box enter the text for which you want to generate a QR code. After entering the text click the generate button and your QR code will be generated. The save button on the right side will let you save the generated QR code on your computer in JPEG format. The ads in this app are quite distracting, but it does its work quite well. 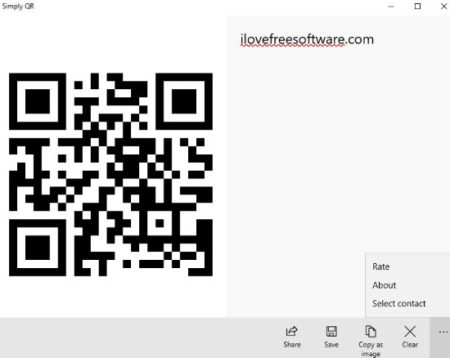 Simply QR is a free QR code generator app. The interface of the app can be seen in the screenshot above. You have to enter the text in the box given on the right side of the app window. You will notice that as you are entering the text the QR code on the left is also changing at the same time. When you finish entering the text the QR code is also fully formed. Now you can go ahead and save or share this QR code from the tool bar given at the bottom. The app allows you to save the QR code on your computer in PNG or JPEG image format. You can also copy the image right from the app interface and paste it anywhere. The saved image of the QR code can also be shared easily. 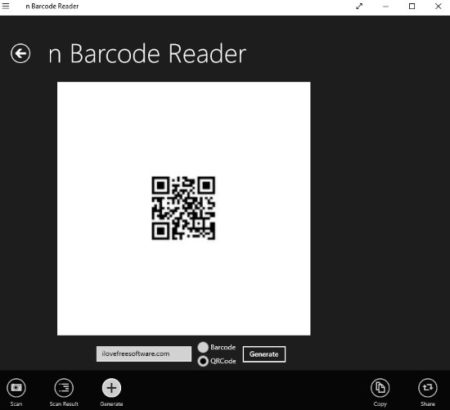 n Barcode Reader is a free barcode reader which can also generate QR codes. The app is mainly a barcode reader app and a scanning window will open up as soon as you start this app. You have to scroll to the bottom toolbar and select the generate option from there. Then you will be taken to the QR code making screen, which can be seen in the screenshot above. You have to select whether you want to generate a barcode or QR code. As we are only talking about QR codes so we will select that QR code box. Then we will enter the text that we want to include in the QR code. After writing the text down we will click the generate button. Clicking the button will generate the QR code in the white box given in the center of the screen. Now you can go ahead and copy this image and paste it into any app you want to. You can also share this QR code easily.

These are the 5 free Windows 10 QR code generator apps. These apps are all pretty easy to use, and let you generate QR codes. Most of the apps also let you generate barcodes also. All the apps pretty well and the one which I liked the most is Barcode Generator. So check these apps out and see which ones you like.