thoughtmaybe is a repository of well known full length documentaries that you can watch online for free. These include documentaries based on war, drugs, economics, conspiracy and many more diverse topics. Users can search for a documentary based on any theme or browse them from a list on the site. The documentaries can be indexed based on title, popularity and freshness so users can get the best and relevant documentaries to watch. Before you start watching, thoughtmaybe provides a short summary of the documentary so you know the topics the documentary is going to touch. Moreover, you can also sign their mailing list so you’ll get a notification in your mail when a new video is added.

Websites like thoughtmaybe are pretty hard to find. Documentaries in thoughtmaybe touch topics that are very much relevant in this age and address the socio-economic and cultural environment of this world. You’ll find documentaries on MKULTRA, mainstream media, Internet censoring, Chemtrails, Rwandan genocide and many more interesting subjects. Documentaries from famous directors like Alex Gibney, Adam Curtis, John pilger, etc make this site worth exploring. 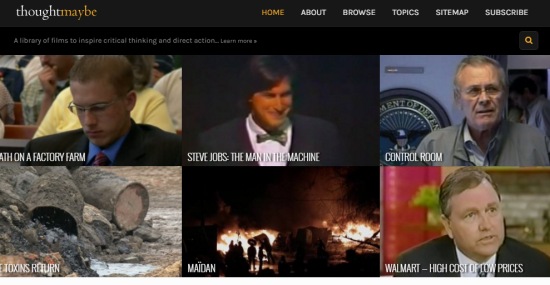 So, let’s take a tour of this awesome website. If you want to try out more of such websites where you can explore the known and unknown of this world, make sure you check out this list of free documentary websites.

How to Browse and Watch Documentaries on thoughtmaybe

When you open thoughtmaybe for the first time, you’ll see a montage of famous documentaries that are trending on the site currently. Scroll down and you’ll find new films that have been added recently to the site. Scroll some more and you’ll see there will be films that are recommended for viewing and some of the popular titles on the site. 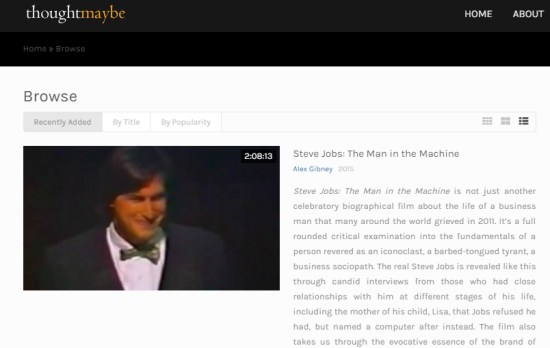 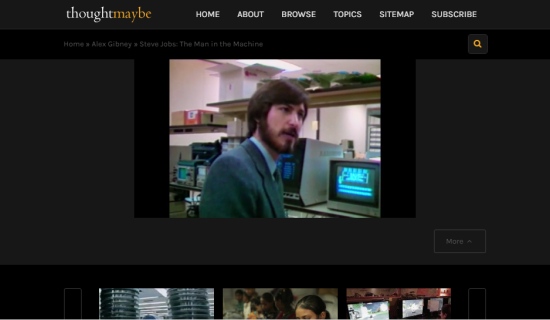 How to Search for Documentaries on thoughtmaybe

Looking for a particular documentary based on a keyword is pretty easy. Use the search bar at the top of the page. In the search results, you can refine your search by sorting the results by relevance, title and date. If you want to look for a documentary based on the topic it is themed after, click on Topics at the top of the site. You’ll see a list of all the topics and keywords that documentaries contain.

I loved thoughtmaybe since it does not have a single instance of ads or hidden adware, unlike most of the documentary websites. thoughtmaybe is a self funded, self directed and self hosted library of awesome documentaries. The only thing I found lacking are much more engaging, cryptic topics like aliens, illuminati and other conspiracy theories that are fun to watch. Though that’s my personal opinion, I am very much sure people will appreciate this website. I award 5 stars to thoughtmaybe.