Cubed Music Player for Android (aka ³) is a free music player for Android devices which comes with an intuitive and innovative interface. The app has a simple interface which is centered around a cube. On this cube, the album art is displayed and also interacting with the music player is based around interaction with the cube. The player get the missing album art from the internet, making your collection look better.

Cubed Music Player for Android features a simple interface, some clever gesture control, and an equalizer. The player also allows you to change the way album art is displayed in the app. 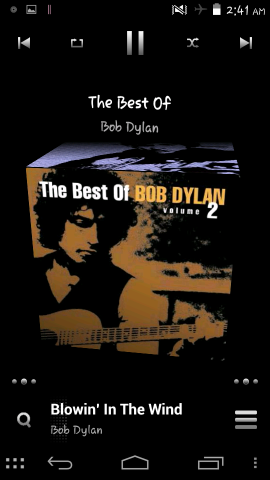 You can get Cubed Music Player for Android from the link or QR code posted at the end of this review. Once installed, launch it from the app drawer and the app will ask you the permission for downloading missing album arts, press on the ‘Yes!’ button. Cubed music player will start downloading the album art as seen below. Also it is recommended that you use the Wi-Fi to download the album arts. 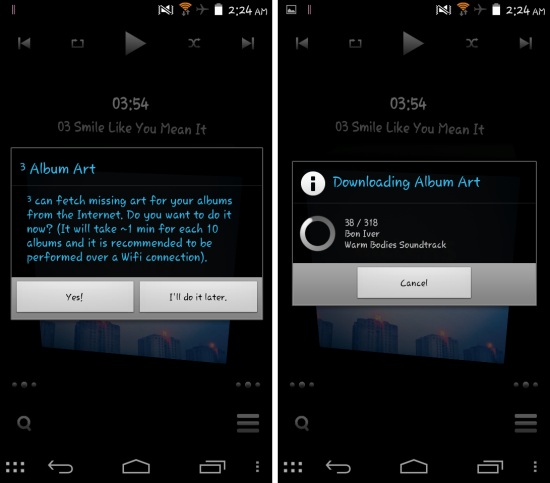 Once album art has been downloaded, you will have the interface as seen here in front of you. The music controls are present at the top most part of the screen while the album arts are shown on a cube. The navigation is based on the cube, you can spin the cube to browse the albums alphabetically or flick it to the right and left for quick searches alphabetically. If you like to play a song from an album, just tap on it and all the songs will be shown. Now you can play what you like from the album or play the whole album. The now playing song along with the progress bar is shown on the bottom most part of the screen. 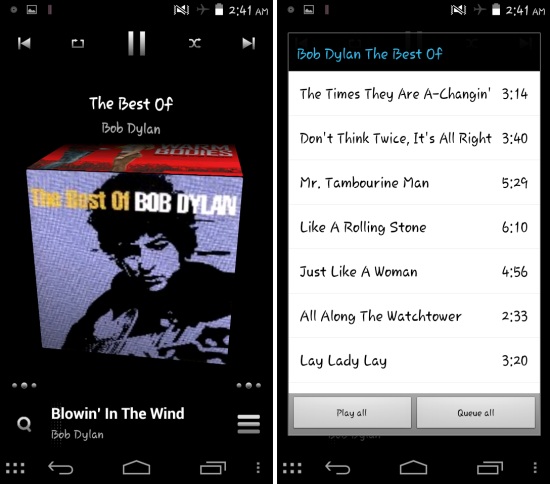 Settings and other options:

While you are in the app, press the menu button and you will have the options as seen here in front of you. ‘Playlists’ option lets to access the playlists on the device while the ‘get art’ options lets you download album art if you are missing any. Also ‘preferences’ option takes you to the interface seen below from where you can manage various preferences such as full screen player, lock screen control, portrait lock, directory filter, turn on scrobbling etc. 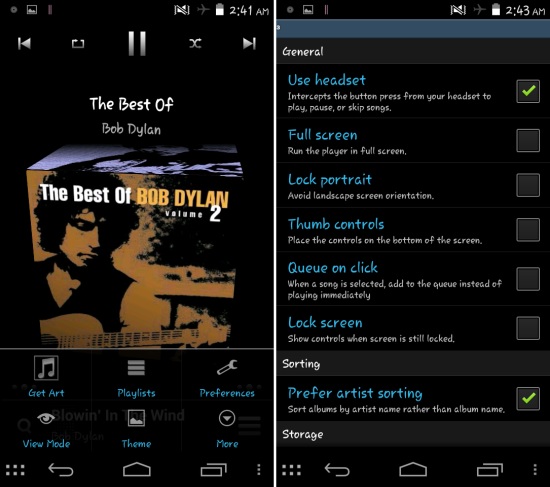 Cubed Music Player for Android provides you with more layouts which can be accessed by pressing the ‘view mode’ options from the option menu. The app will provide you three more options as seen here. In the below screenshot you can see each of these.

Cubed Music Player for Android is very easy to use once you get hold of the interface. The app comes with visuals which are far better than many other music player apps. Also the spinning and flick the cube is really fun. If you’re looking for a free music player with nice design and simple controls then try Cubed Music Player (aka ³).

Get Cubed Music Player for Android from here or scan the QR code below. 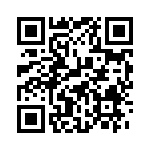