.: SUDOKU :. is a free Windows 8 Sudoku game app. It’s the Windows 8 version of popular paper pencil game app, and can be played in all Windows 8 supporting devices. If you like solving Sudoku puzzles, then this is the game app for you. You can play the game in three game difficulties: Easy, Medium, and Hard. The game has 9×9 boxes Sudoku puzzle, where you have to complete each row and column with number from 1 to 9, without repeating them. There’s no time limit in the game to solve the Sudoku puzzle, but it does records the total time you took to complete the puzzle. 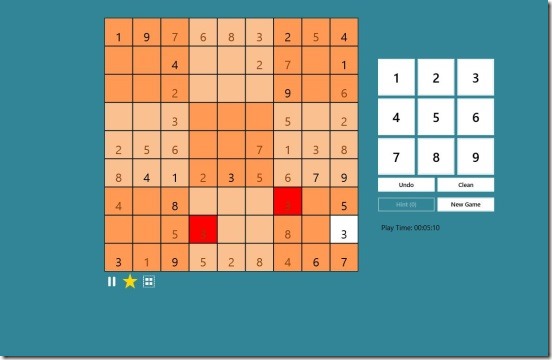 To make the game more challenging and interesting, the game  has been made a little difficult. But, there are hints that you can use to solve the puzzle, if in case you get stuck anywhere.

The game is simple and is completely based of the all time popular Japanese game Sudoku, also known as Number Place. And, just like the original, the game also applies the same rules of Sudoku, that is a 9×9 square, that has 81 sub-squares, and you have to complete the blank sub-squares with missing numbers.

Since, it’s a game based on the classic, so it’s obvious that this game is fun and interesting. But to make the game more fun, there are some more enhancements in this Windows 8 version of Sudoku game. There are hints in the game which can help you complete the puzzle. And, based on these hints, the difficulty of the game is set. That is, the easy mode of the game has 5 hints, medium has 3, and hard has 2. The hints are nothing but the Red marks on the squares that are filled with wrong numbers. These later help you to change wrongly entered squares with correct ones. Simply, click on the Hint button once, and one wrongly filled sub-square gets filled by correct number, automatically. 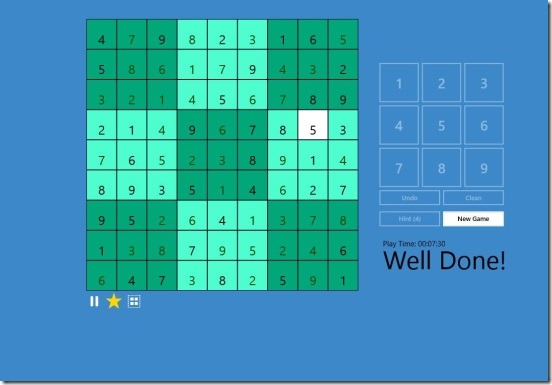 Other than the number of hints, the difficulty is also based on the level of how hard the Sudoku puzzle is. Every time you use a hint, one point from total number hints gets reduced. Well, using up all the hints doesn’t end the game. But, it only means that you can’t use them anymore. However, a good thing in the game is you can undo the steps to the very first step you took.

The app also supports an option to change the theme of the game. Simply, click on Theme button (next to Star button). 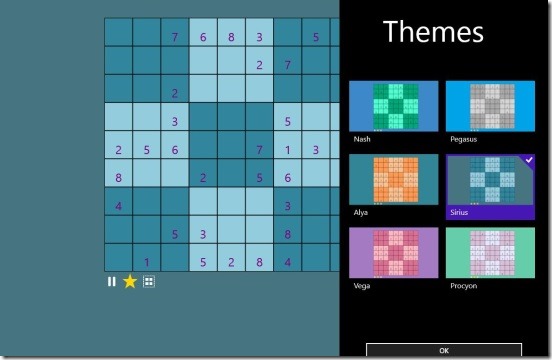 Here are some good Windows 8 paper-pencil game apps for you: Sudoku and Tic Tac Toe.

.: SUDOKU :. is a free Windows 8 Sudoku game app. It’s fun, has simple graphics,but has a good gameplay. Though, I wish that there was some medium to save the best time record. Otherwise it’s all good game to play in free time.