PressPlay Video is a free Windows 8 media player app. It’s a very handy Windows 8 app to play videos on your Windows 8 devices. This comes especially handy if you are looking for a MKV and FLV player. Besides these two, the app also supports 3gp, avi, mp4, mov , mpeg, wm, wmv etc.

This video played for Windows 8 supports both touch and non touch Windows 8 devices. It also has an integrated folder and file explorer, using which you can browse for the videos in video library, local directories, removable devices, Homegroup and then play them on the left side of the screen or in full screen mode. 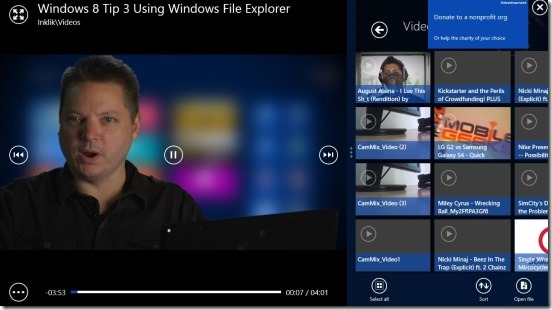 PressPlay sure is handy media player app. The app works in offline mode, and once downloaded you don’t need to connect to internet at all. Like I said above, this Windows 8 media player app accesses the files locally stored in your Windows 8 devices.

The inbuilt explorer is petty helpful in quickly finding specific videos. The app only shows the supported video files and nothing else.

However, integrating this Windows 8 media player app with the Widows 8 Search Charm would be nice. Still the explorer is pretty helpful. 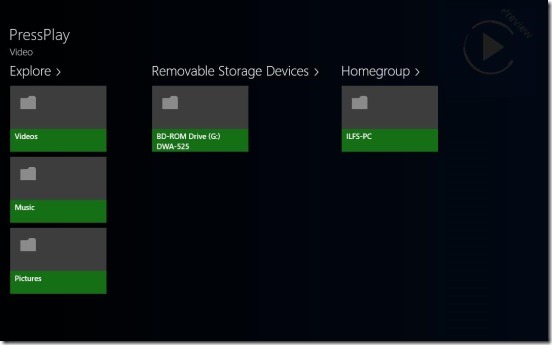 Simply browse through folders and then click on the video to play it. A good thing at this point is that you can play the next or previous videos inside the same folder from the same video playing part of the screen; without going to explorer area and then selecting the requisite video. There are two buttons for playing next and previous videos at both sides of video playing area. Simply click on the switch to full screen button at top left corner of the video playing area, to switch to full screen mode. 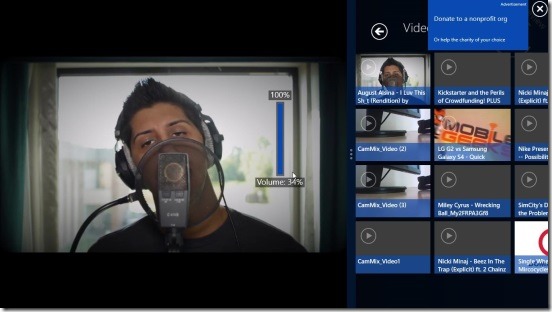 Also right click on the video playing area or take the mouse towards the bottom of screen, and you’ll get more options. This gives a list of options, including: open file, load caption, volume, shuffle, play, playback rate, video frame, and play in background. The aforementioned Play option is to control the looping of the video.

You can set a video to play once, forever or a playlist to play once or forever. The video option is to change to different pre-built video playing screen sizes. By default this Windows 8 media player app doesn’t play the videos in the background, but you can enable this feature by using the play in background option. 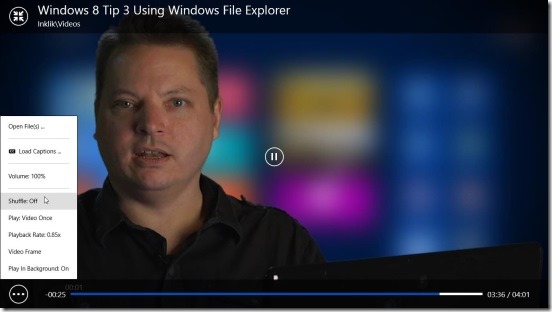 Don’t forget to check out these similar Windows 8 apps:Lucky Media Player and Music 2.0