Rocket Science 101 is a Free Rocket Simulator From NASA for Android and iOS. It is a very informative app that basically lets you build a rocket and launch different NASA missions. You can also call it a rocket simulator game if you want. It has 3 different rocket simulation modes and in each mode you can learn a lot about rockets. You will get to know about rocket components, rocket burning stages, different rockets, and know about NASA missions.

This free rocket simulator app for Android and iOS is both fun and educational. Both kids and adults can use to know about rockets of NASA and how they work. The overall rocket simulation includes building a rocket using prime components and launching it into space. The best thing about this free rocket simulator game is that it has real rockets used by NASA. After each simulation, you get to view actual launch footage of the rocket or mission you are building.

Let us explore more about this app below.

Did you know, you can View Real-Time NASA Satellite Imagery? 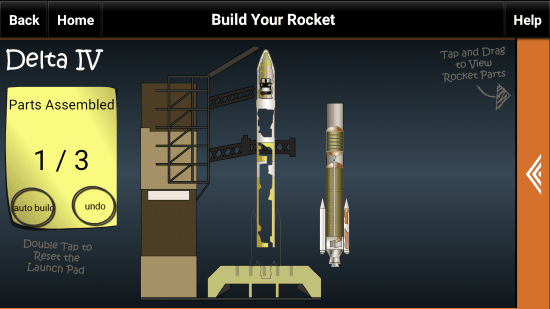 Simulation Modes Of This Free Rocket Simulator Game From NASA 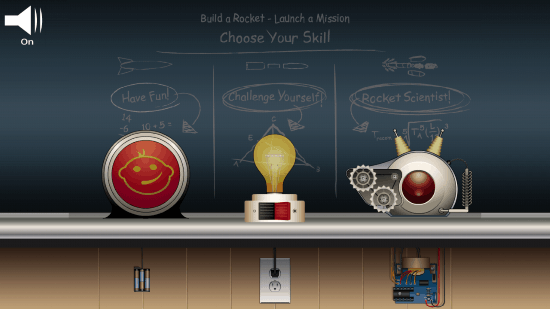 There are three simulation modes of this rocket simulator app for Android and iOS. Based on your skill set, you can choose any of these modes. It is better to begin with the first one.

Let us know about each of these modes one at a time.

Have Fun: First Simulation Mode Of This Rocket Simulator From NASA 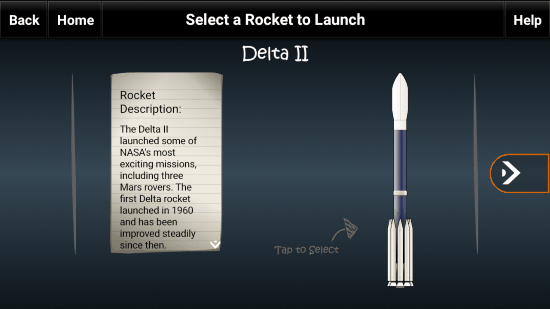 This mode is the easiest mode. In this mode, you can select from different rockets from the list available. Each rocket is displayed with its description. After selecting a rocket, you have to build it using primary components of the rocket. 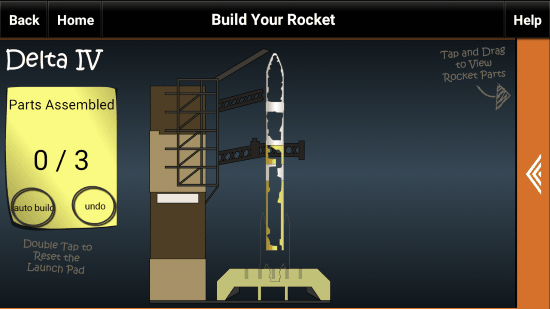 As you can see, here, you have to assemble three parts for the selected rocket. The number of parts may vary according to selected rocket. See the orange bar on the right side of the interface? Slide it to left to open the components list. 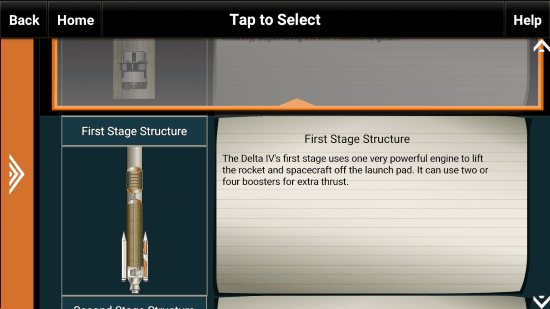 This is what the components list looks like. Tap on a component to carry it to rocket assembly area. 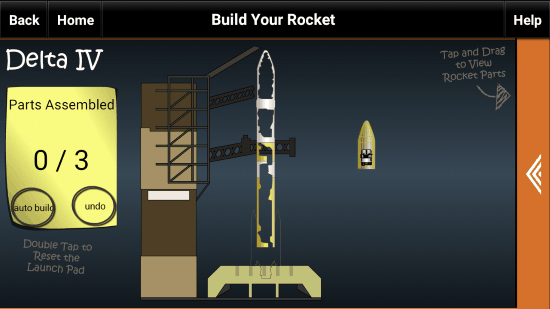 Now drag the component to the area where you think it would fit perfectly. Keep adding the components till rocket assembly on this rocket simulator is complete. 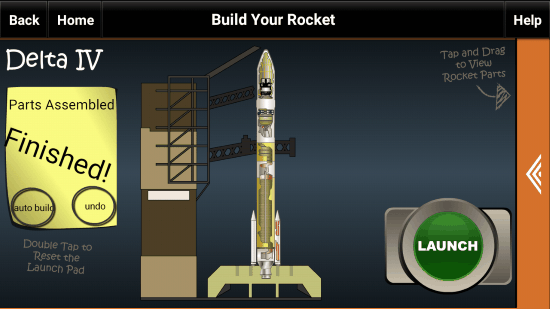 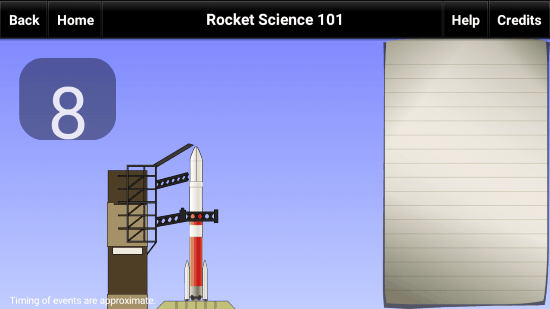 As you hit that Launch button, the countdown begins from t-10 seconds. 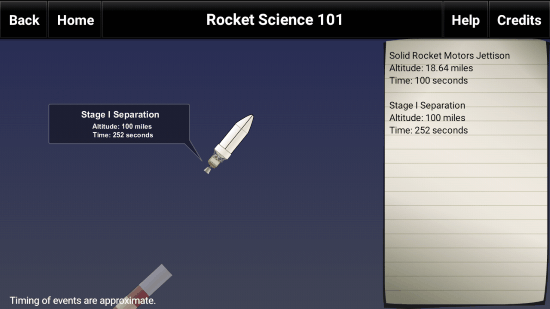 As the rocket ascends towards space, you will see the separations of different levels of rocket happen. For each separation, you get to view the information about its altitude and time on the space available at the right side of the interface. 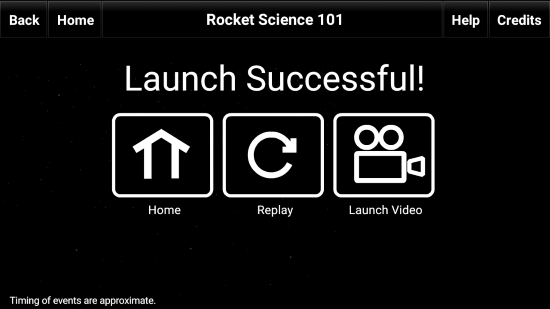 When the rocket simulation ends, you can go to Home page to start building a rocket all over again, or replay the last launch. The Launch video shows you the real launch video of the rocket on YouTube. 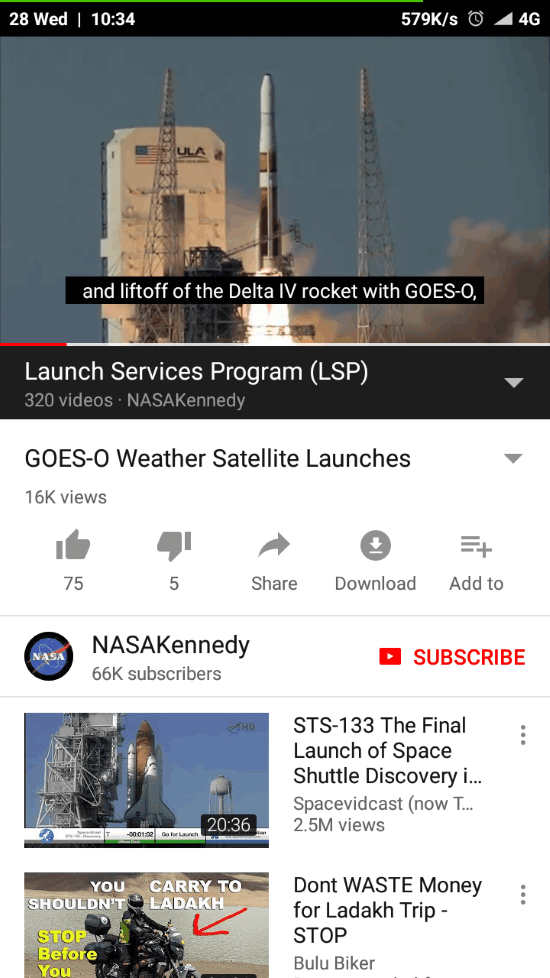 That’s all about the first simulation mode of this rocket simulator game for Android and iOS.

Challenge Yourself: Second Simulation Mode Of This Rocket Simulator 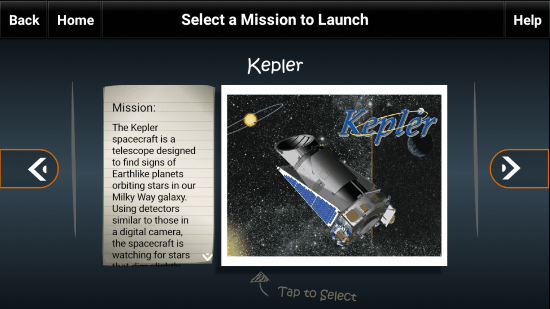 The second mode of this app is a bit advanced. It lets you select a mission for which you’d like to build a rocket and send it on its journey. There are different missions to choose from, for example the one in the above screenshot, Kepler mission. Another mission out of many missions is JUNO mission. 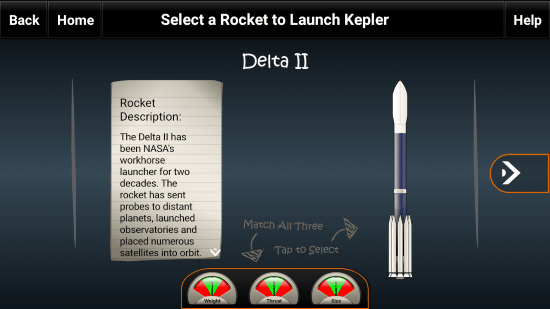 The only difference during rocket assembly that you will come across is the number of components. Here, you will have to assemble more components to build a rocket and place them at right position. This makes things more informative and makes it clear for you what all goes inside a rocket.

Complete the rocket and launch it to space. 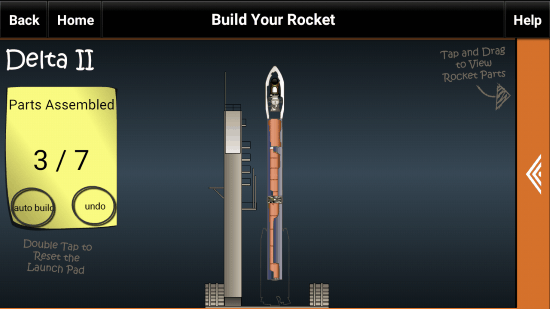 If you are not sure about the components to add on your rocket in this rocket simulator from NASA, use the Auto Build option. This option will automatically add a component which comes next in the order of rocket building. When done, you can continue building manually. Use the auto build option wherever you are stuck. If you think you put a component at the wrong place, there’s an Undo option as well. Both these options are available at the left side of the simulator interface.

When you have completed your rocket in the third mode of this rocket simulation app, you can continue with the Launch. The launch continues as it does in the first and second modes. Let the launch finish, and you will be able to view the actual launch footage of the mission.

This rocket simulator from NASA is a very informative app. What I like about it is that you can play around with actual components that are used in rockets. This way, you will get to know where a specific component goes, what is its use, and when and at what altitude it separates from the main rocket unit. All of these features make this rocket simulation app a desirable app for kids and as well as adults.

Get Rocket Science 101 here for Android and iOS.