Here is the list of 5 free Solitaire Game on Facebook. These Solitaire games can be played as a single player. Or, you can invite your friends to play in multiplayer mode. Invitation can be a challenge, or for assistance. True that, Assistance! as these free Solitaire games have imbibed some story in them. These stories take you to some mysteries to be solved. Ancient conflicts to be explored upon, save kingdoms from evil and demons, and much more. Further, these Facebook Solitaire games are not restricted to just one kind of Solitaire. And, instead includes all the kinds like Tripeaks, Pyramid, Klondike, Freecell, and Spider. 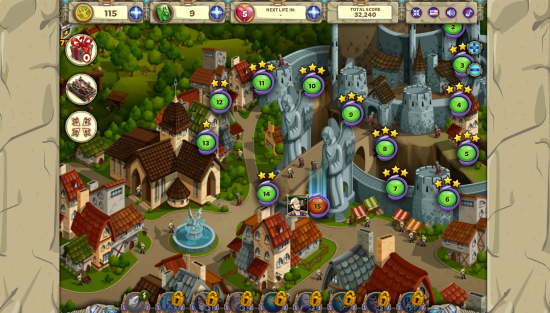 Solitaire Tales is a free Solitaire Game on Facebook. This game makes Solitaire really interesting to play by adding a story to it. As per the story, a magical deck of card is stolen from a kingdom. The deck is responsible for peace in the land, and must be brought back. While escaping, the sorcerer who stole the deck, left a trail of cards. The king summons heroes to follow the trail and bring back the deck.
For each card left as trail, you need to play a game of solitaire. You will have to arrange cards in ascending/descending order. If any card in order is missing, you can draw a card from deck and begin arranging cards according to the drawn card. Play till all the cards are arranged. For some levels, you only need to play till the highlighted cards are arranged. The final score depends on the number of cards remaining the deck. An option to undo your moves is also available.
Do remember, you have a team with you on the journey, so if needed, you can use the powers of Wizard, Elf, Dwarf, and Goblin to help you cross levels. Using their powers consume cash, so use them wisely; cash is limited and not cheap.
There are limited number of lives available here. If you loose a game, a life is reduced. A life is regenerated every 30 minutes.
Keep solving the levels throughout the trail of cards left behind to reach the sorcerer, and bring back the cards.
This solitaire game on Facebook can be played in multiple languages, such as: English, French, German, Spanish, Turkish, etc. You can even share your score on Facebook or invite Facebook friends to play this game 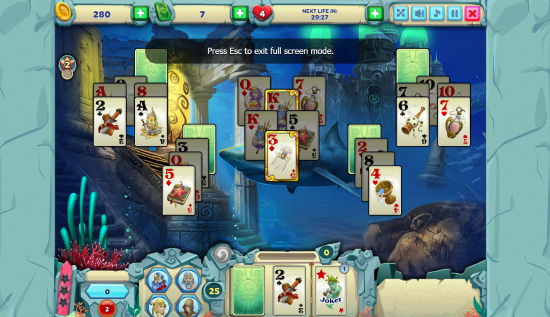 Solitaire Atlantis is a free Solitaire game on Facebook. The story which is followed here is that you are on expedition of deep ocean. Play the game of solitaire while surfing through different levels. Finishing each level will reward you will stars. While surfing under deep ocean, you will come across an ancient box. This box can only be opened once you have collected 39 stars. As soon as you open this box, a cyclone will take you to an ancient kingdom to solve some mystery. Heroes of this kingdom are trying but unable to solve the mystery. With your arrival and powers of heroes, mystery can be solved. The mysteries in the ancient kingdom can only be solved by playing different levels of Solitaire.

Powers of heroes of this kingdom are available on the card deck, but their use can cost you some cash. Also, you can avail power-ups like wild card and save card at cost of your earned points and cash. However, using these power ups are helpful at higher levels.

You loose a life each time you fail in a level. A new life is generated every 30 minutes.

You can invite your friends for a challenge, or even for assistance as and when required in the game. Also, you can share the points that you have scored for each level on Facebook. 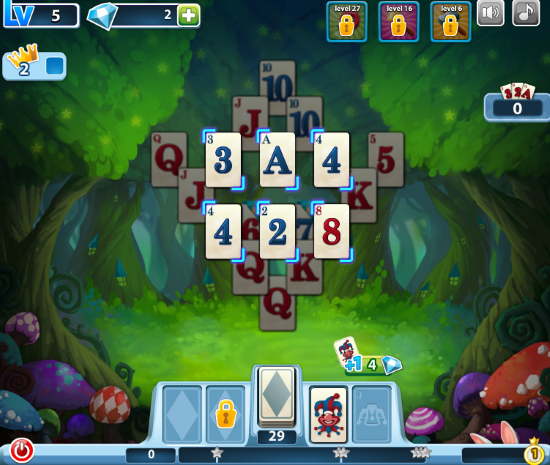 Solitaire In Wonderland is another free Solitaire game on Facebook. Here, you have to help Alice and magician Merlin from infiltrators called Card Soldiers. White Rabbit is your companion. He will guide you through the game for the charge that you have taken for vanishing all the card soldiers.

Card Soldiers are nothing but cards which need to be brought on the card deck of Solitaire game. Thus, your aim is not only to arrange cards on board in ascending or descending order, but also to bring card soldiers (disguised as cards) on card deck. Also, instead of levels, Solitaire Wonderland goes with set of levels. Each set has a sequence of Solitaire game levels. There are 108 such sets to finish. The aim is to throw out all the Card Soldiers which you do by completing all these 108 sets. Remember that you have only 30 minutes to solve any set.

In each level, you have to score defined minimum points. This game has pre-loaded players (Alice, Pete, Andrew, and Doug) and you can invite your friends to play under these names. Also, more players can be added and you can send them lives, too.

With each level finished, you earn coins and more interestingly, jewels. In exchange of earned jewels, Magician Merlin lends you more advanced powers like ‘undo moves.’ 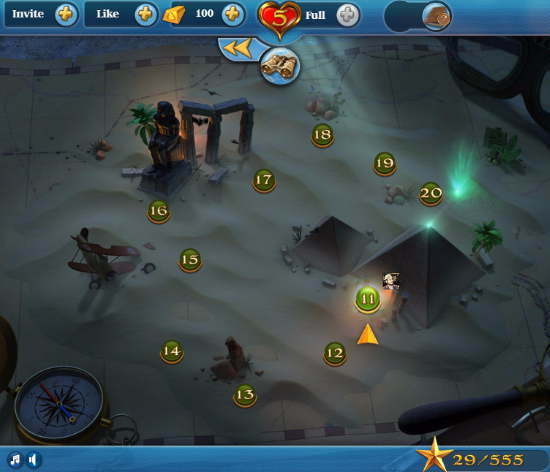 As the name says ‘Pyramid Solitaire Saga,’ it is truly one! Pyramid Solitaire Saga is your expedition for revealing the long hidden treasures and magics of wonders of our world. You come to revelation of such, only after exploring through various episodes. These episodes are sets of Solitaire game. And, unlike heroes accompanying you in Tales and Atlantis, here, you have to play Solitaire by own. Let’s see how.

There are various levels that you need to play. In each level, you will have to arrange cards in ascending/decreasing order. There are limited number of cards in the deck for each level, so carefully draw cards from the deck. You have to meet the minimum score in each level of Solitaire, which is displayed before you begin playing. In addition, you have Boosters (Save Card, Wild Card, etc.), which are like power-ups defined in above games. Also, you can earn Gold Bars (advanced powers) like ‘Undo Moves’. Here, you can buy lives, too.

The visuals and interface is far better than all the other free Solitaire game on Facebook. May be because developers of it are those who developed Candy Crush and Farm Houses. Play yourself, clear the levels of Solitaire and thus, reveal treasures and magics of the wonders of our world. 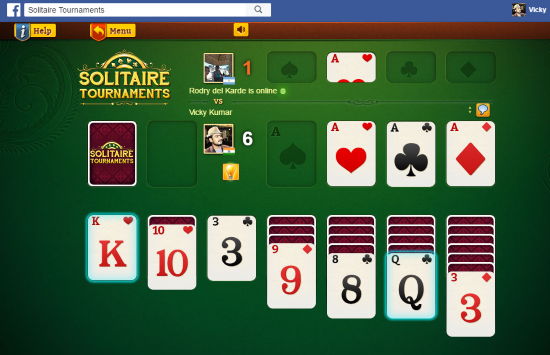 If you are classic Klondike Solitaire fan and want to play in real-time/online with others, then compete at Solitaire Tournament. Battle is equal, as shuffle and orders of cards are exactly the same for both opponents. In this free Solitaire game on Facebook, tournament time is fixed.

Within the given time, you have to arrange cards as soon as possible. Whoever finishes first, wins the game.

As soon as a millennial hears ‘Solitaire’ s/he gets a flashback of old personal desktop computers. Although Solitaire came in late 17th century, it gained a booming popularity with advent of PCs. But, It lost popularity for almost over a first decade of 21st century. However, storified versions of free Solitaire game and online Solitaire live tournaments has once again brought it back on charts. Solitaire Saga installs has crossed 1 million users and others are very close to half a million. It’s up to you whether you want to experience the storified digital version or just want to play the classic Klondike Solitaire. Whatever may be, you will find more of such storified Solitaire than these 5 free solitaire game on Facebook.