The Show Manager is a Windows 10 TV show manager app which can keep a track of show which you watch and which channel do they come on. If you are a avid TV show watcher, then remembering which show airs on which channel can be a challenge. You also do not want to miss out on some episode because you didn’t remember if the show was on that day. This is where Show Manager can help, in this app you can store all the favorite shows that you watch and what networks they feature on can also be mentioned.

The Windows 10 TV show manager app can be downloaded from the Windows 10 store or from the link given at the end of this article. When you start this app you will come across an interface like the one seen in the screenshot below. 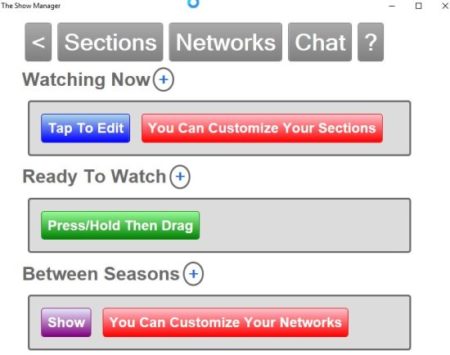 As you can see on the page you can add shows under different categories like watching now, ready to watch, between seasons, etc. At the top of the screen you will see buttons like sections and network. In both these sections you can add new headings. You can add more sections to the existing list or even edit the existing list. The sections screen is shown in the below screenshot. To edit a section click on the edit button given in front of it. To add a new section click on the new button. 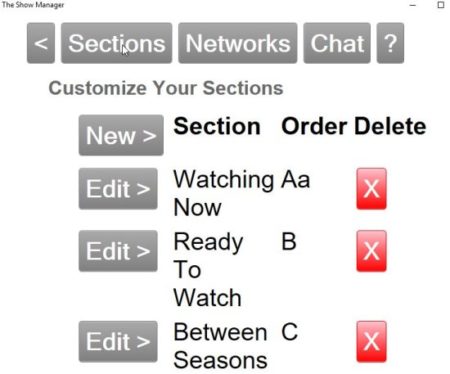 After adding a section just click the save button to save the changes. Similarly, you can edit or add new channels. The network section is shown in the screenshot below. 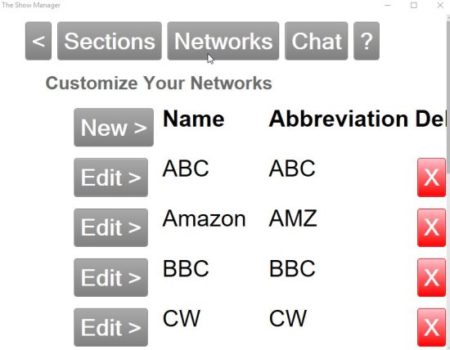 On this screen also you can edit the given networks by just clicking on the edit button in front of them or add a new network by clicking the new button. For adding a new show under any of the sections, just click the plus icon given under that section. This will bring up a screen like the one shown in the screenshot below. 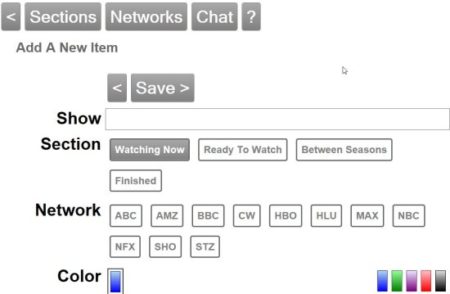 Add the name of the show, choose a section to put this show under, choose which network this show runs on, and choose a color for that section. Click save button when you are done. 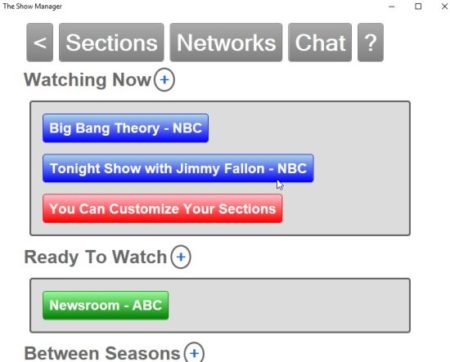 The shows you added will now be visible under different sections you put them under, as can be seen in the screenshot above.

The Show Manager is a decent app if you forget which show airs on which network. This app will do that for you easily. You can just add shows you watch and which network they air on. Next time you have to watch a show, you don’t have to wonder which channel it airs on. The app will let you know as soon as you open it. Putting shows under different sections can help you distinguish which shows you are watching, which shows are on season break, etc.

Check out The Show Manager for Windows 10 here.