Windows 10 Code Indenter is a free app for formatting your programming code and make it readable with proper line spacing and all. Indenting code puts the code in a neat format and makes it easily readable. This app lets you do this in a matter of seconds, even if the code you have is thousands of lines. This app could come in handy for programmers who have to write lines and lines of codes.

The Windows 10 code indenter app can be downloaded from the Windows 10 store or from the link given at the end of this article. When you start the app you will come across a screen which looks like the screenshot below. 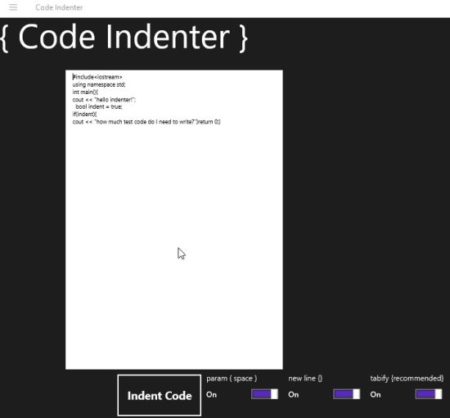 The home page of the app is shown in the screenshot above. By default the app shows an example which you can indent and try out to see how the before and after code formatting looks like.

The default example showing the indenting in code is shown in the screenshot below. 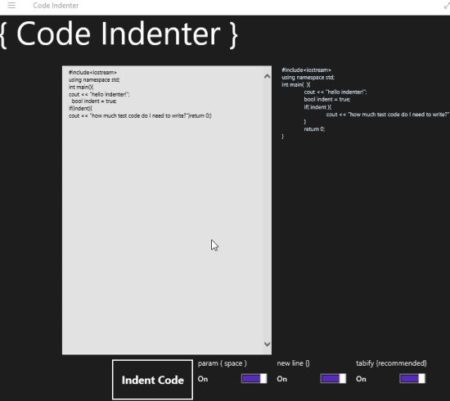 The code indentation parameters are also shown at the bottom of the app window. Like new lines are controlled by braces, so every time the app sees a brace it will automatically go to a new line. Parenthesis is for line spacing. You can turn any of these options off if you want to.

The below screenshot shows a sample code which I tried out through this app. 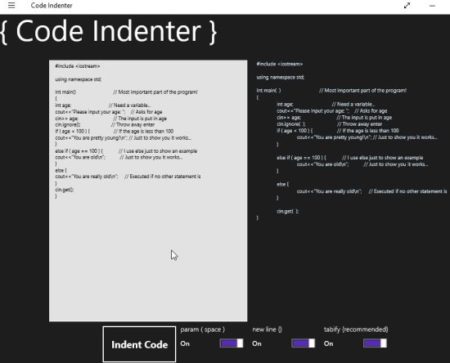 The indentation was done pretty perfectly and the code looks neat and readable after indenting. All you have to do is write your code in the white box given on the left of the screen. Once you are done writing your code, click the indent code button at the bottom of the window. The indented code will now appear on the right side of the window. This new indented code can easily be copied and pasted anywhere you want.