Introducing Later.fm, which is somewhat a Listen Later button for multiple music platforms. It lets you save music from YouTube, SoundCloud, Spotify, BandCamp, and Vimeo to listen later. It saves the music at a single location. This will save you from opening separate websites to listen to the music you wanted to listen later.

All you need to do is copy the URL of the video or audio and paste it in Later.fm. It will be saved for you to listen later. Or, they also provide a very simple Google Chrome extension to add music to your Listen Later list. So, simply keep adding music that you want to listen later. Whenever you want to listen to them, you can access them all at a single location. The best part? Your saved music will play in the interface of Later.fm. You will neither be redirected anywhere nor will the music open in a new tab. Sounds interesting, just like your taste in music, right?

So, let us quickly get you started to save music to listen later. 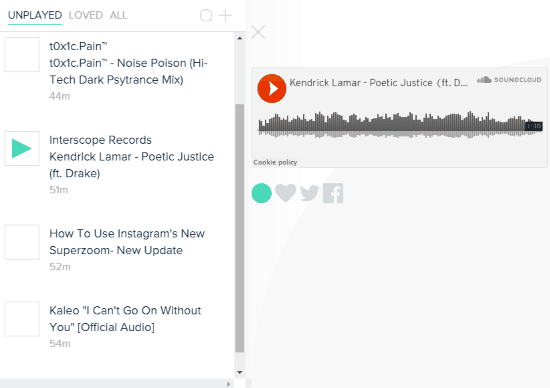 This is what the interface of this web app looks like. Notice how your music plays right on the interface without you having to go anywhere.

Take a look at this Website to Know How Different Music Genre sound.

How To Save Music From YouTube, SoundCloud, Spotify, BandCamp To Listen Later on Later.fm

Well, first of all, you will need to sign in to Later.fm. You can sign in through your Facebook or Twitter account. This will make sure that you do not lose your saved music. Also, you can access your saved music on any computer with internet access. So awesome, isn’t it? But wait! there’s more of awesomeness; keep reading.

So, about saving music to listen later, its pretty easy. All you need to do is get the URL of the music you want to save and paste it on Later.fm. For YouTube and Vimeo, you can copy the URL of a video from the address bar of browser. For audios from SoundCloud, Spotify, and other websites, you will get the song URL from the Share button. 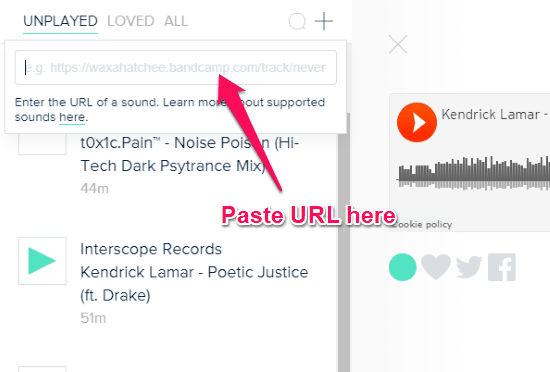 Once you have copied the URL, click on the + sign, then paste the URL in the box that appears. This will save the song to listen later.

Another way to save music to listen later is through Later.fm’s Chrome Extension. When you sign in, you will be prompted to add the extension to Chrome. In case you missed the prompt, you can easily add it to your Chrome browser. Here’s how. 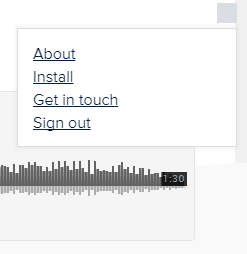 On the top right corner of Later.fm, there is a small square button. Clicking on it will open up a menu. Here, click on Install option. This will install the extension to your Chrome Browser.

How to add music to your account using the extension? 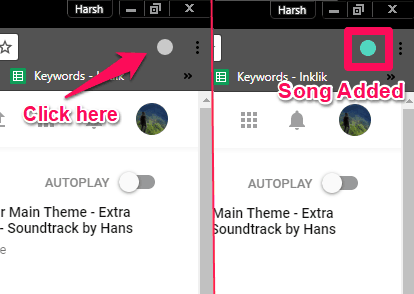 This very round icon appears when you add the extension. All you have to do is open the video or audio in browser and click on the icon. As it turns green, the song is added to your list to listen later.

That’s all about saving song to listen later. Let us discover the playback options and other features Later.m has to offer. 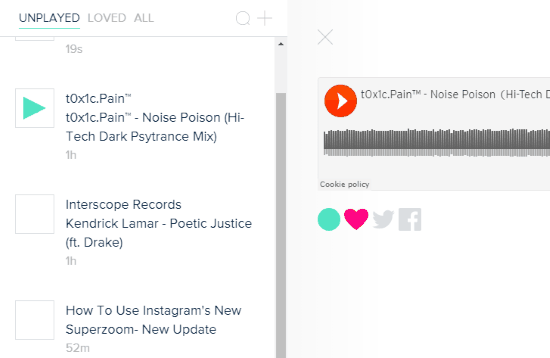 This is how your list of saved music will look like. All the added songs will appear in the Unplayed list. Click on a song to play it. The Soundcloud or Spotify songs will play as displayed above. If you have added a music video, the video will play here only. Once a song is played, it will disappear from the Unplayed list.

If you would like to watch a song later or love a song, you can click on the Heart icon. It will put the music in the Loved playlist. Else, the song will only be available in the All list.

See the green button, if you click it, it will turn grey. Clicking it will imply that you no longer want to listen to a music. After that, the music will disappear from all the lists of your Later.fm account.

Later.fm can be a great tool for music enthusiasts. Being a music lover, I know the pain when you so want to listen to a song that you listened before, but cannot remember its name, or where you saved it. Great tool at rescue for music lovers. If you know any such amazing piece of tool, you can help fellow music lovers in comments section below.