There are some websites to run code online and Repl.it is one of the best. Here it supports more than 70 languages to code. It offers you features to write code and run it online. Also, it offers some advanced features like game programming and interactive shell. And now they have launched their official extension to run any example code available on the web. You just select code you want to run and specify its language and it will take you directly to the editor. Just run the code in one click and if you want to make some changes then you are free to do that. 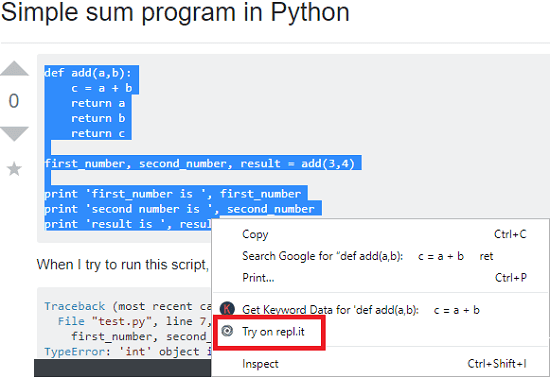 Using this Chrome extension to run code online is very simple. You just install this extension from here. After that, wherever you find a piece of code, simply use this extension. But before actually start using this extension, you will have to make sure that you are signed in to your Repl.it account.

Now, copy any code from websites like Stackoverflow, TutorialsPoint, JavatPoint, etc. Next, right-click to select the option “Try on repl.it”. It will ask you to specify the name of the programming language and then it will simply take you the code editor of Repl.it. Now, just hit the “run” button to execute the code and see the output. 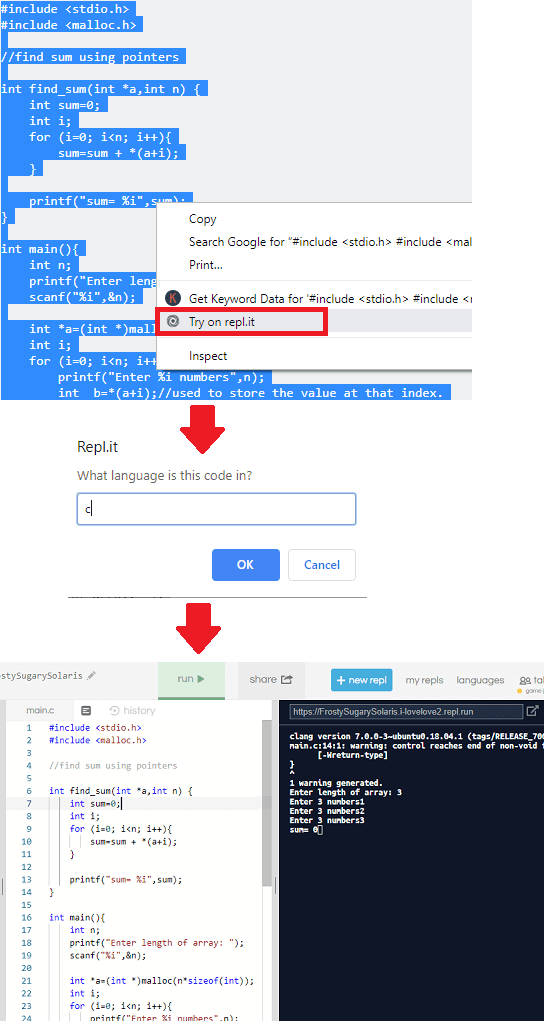 This is how you can use this simple Chrome extension to run code online. Just select any code examples you come across and then simply execute them to see their output. The advantage here is that, it supports a lot of programming languages so whatever code you find, it will be able to run it. And apart from this Chrome extension, there are other features of this coding platform that you will like.

Running code online is pretty normal these days and there are some nice services for it. But Repl.it has now made it even easier with their Chrome extension. Now, you don’t have to keep the tab of Repl.it editor editor open to paste code and then execute it. You just select any code and run it in just two clicks. Also, on websites like GitHub Gist and NPM registry, you don’t even have to select the code as automatic prompt there. In coming dates, there will more improvements which is a good thing.