Touch Bar Demo App is the free Touch Bar Simulator that you can use on any MAC. Here this touch bar works in the same way as the actual touch bar works in MAC these days. It shows relevant buttons and options according to the currently opened applications. You can use it in any MAC OS which is running on 10.12.1 or above. You can bind the different keyboard keys to toggle the touch bar and also specify its custom position on the screen. It shows you common controls to launch Siri, change volume, brightness, etc., easily. You can configure some other options using its menu bar icon.

Touch Bar in MAC was introduced a couple of years ago and it’s very useful tool. But if you are still using the old MacBooks then you can use this virtual Touch Bar to do the same thing its does in new MacBooks. When you are working in text editor like application, it shows the word suggestions and emojis, when you are listening to music there will show music controls, and when you are working with the photo app then you will see options to download, share, and scroll through photos.

How to use this free Touch Bar simulator app in MAC?

Using this app is very simple. If you have MAC version 10.12.1 or later then you can download this Touch Bar Simulator app from here. After that, simply run it and you will see its icon in the menu bar. After that, you can use the shortcut keys to invoke it and then simply do whatever you want.

By default, the key to show its interface is “Fn” key. But you can change that if you want. You can open any application and then toggle the touch bar. You will see the relevant options in it. For different applications, it will show different options. You can see some below. 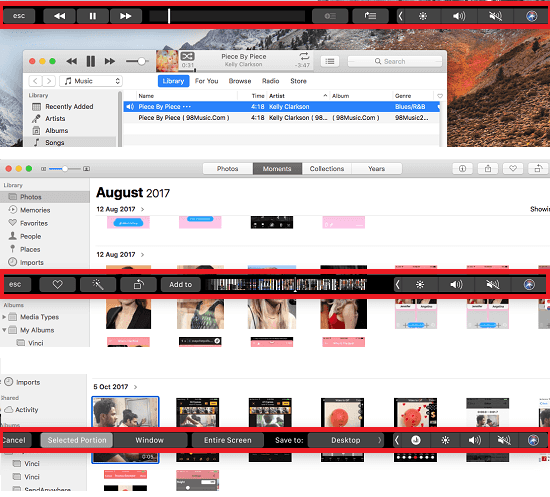 That’s it. If you like touch bar but you don’t have it in your MAC then you can install this. This app works in the same way as the actual Touch Bar. This is an open source app as well and if you are interested in its source code then you can see its GitHub page.

Touch Bar Demo App is a really nice app that you can use to simulate a fully functional Touch Bar on any MAC. This is useful if you are using an old Macbook or iMAC. So, if you want a virtual touch bar then you can try this app and let me know what you think about it.