The Stick Cricket Premiere League, is a free cricket game app that is perfect for cricket enthusiasts who have always aspired to own a team in the premiere league and couldn’t, for reasons common to all. Who have always wanted to know how it is to face an insanely fast ball ? But, its just a slice of regular life, we all know wishes like these hit fruition for only a handful. But the latest edition of the immensely popular Stick Cricket known The Stick Cricket Premiere League, certainly brings you close to heel.

The game-play is seamless, exciting, addictive and perfectly flowing. There are targets a team has to chase in 10 overs with a variety of bowlers in the opposition from spinners to fast in swingers. But, to tackle these balling styles the shot timing is crucial. There is no need to fret about bowling, for the game doesn’t come with any option of that sort.

The Stick Cricket Premiere League is different than the online computer version as the there is absence of running between the wickets motion. However, new addition includes Bravo and other dark looking  players, who are not look alike of Brett Lee.

Indeed, keeping up to the essence of the premiere league the makers did went a mile ahead and introduced money that can (in many instances) play a significant role.

Here’s a list of the sources from which one can earn money, without actually spending a ‘real’ penny:

Hold on rich UV’s of the premiere league, there are certain places where you can spend or rather have to spend the money earned.

First and the most important:The game offers two coaches for Bowling and Personal Batting. Both can be hired for a season and for a long term contract also. However, from personal experience, the bowling coach does help in lowering the target to be chased. Personal batting coach is actually of little help.

Secondly: The game also has an interesting feature and that is of hiring a match-fixer. The match fixer can be exceptionally helpful as he promises a reduced target. Word of caution, the price charged rises to 10,000 if you want seek his help in the Finals. 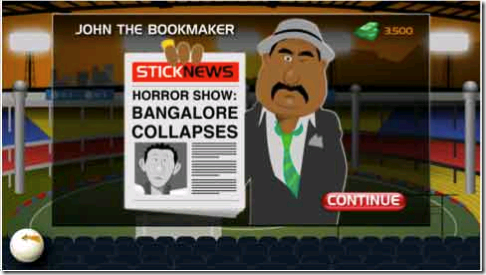 Thirdly: The money can also be spent on hiring a ‘Star Player’. So, you can hire top notch players to play for you at a nominal fee of 3,000.

Coming down to the sixes and wickets (pros & cons).

The money earned through individual matches is out of proportion with the amount charged by players and fixers. It becomes exasperating to earn 3000 back in a single season and in the end is a tougher task. 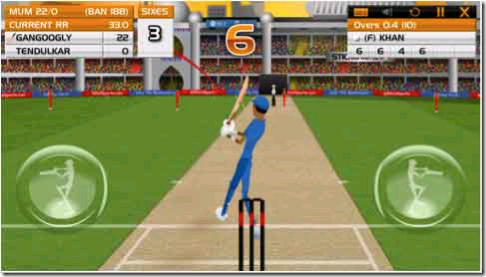 The Game-play after a season or so becomes monotonous and borings, dearth of set benchmarks and bonuses except the sixes bonus adds to the monotony.

The nude runner who distracts the attention of the batsmen, is nothing new. However, absence of the cheer leaders, integral part, of the Premiere league steals away crucial points for the game.

The game is addictive, one cannot stop playing at least till the end of the first season just to see how it is to hold the winning trophy and ripe, unravel the other benefits. However, after a season or so the game becomes boring and all the addiction comes to a standstill. However, for killing time in offices, admissions interviews, cues – this application is a must have. I rate it 3 out of 5. Available on iPhone and Android.