This article covers 5 free Android apps to teach kids how to spell. Spelling apps are quite fun for kids as they have a colorful interface which kids love along with fun games which teach at the same time. All the games offer a pretty animated interface to keep the kids interested in the app. The games in the apps are also easy and fun to play for kids. The apps teach kids the right phonics along with spellings.

The apps make it much easier for the kids also to learn how to spell in a playful way. Let’s look at these free Android apps to teach kids how to spell below. 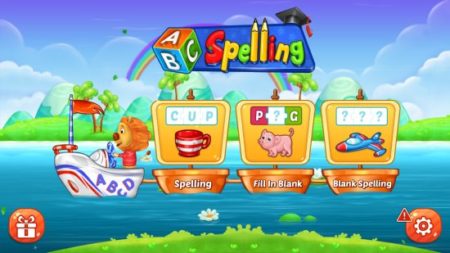 ABC Spelling – Spell and Phonics is a fun app to teach kids how to spell and learn phonics as well. The app has really good graphics and background sound. The main reason kids will enjoy this app is the app is pretty colorful and animated. When you start the app you will see a screen as the one shown in the screenshot above. Here you can choose what you want to learn. You can start with spellings, fill in the blanks, or blank spellings. In the spelling game you will be shown an image and the name of the object in the image will be given below as well. You have to drag the right letters in the right slots. In fill in the blanks game you will have the entire word shown to you with just one letter missing from it. You have to put in that missing word. In blank spelling game you have to spell the entire word by your self. You are only given a image of the object and the blanks below to be filled. The game rewards kids with stickers when they answer right. Also a gift is offered after a child answers 5 spellings correctly. 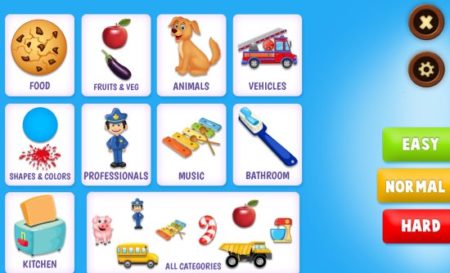 Spelling Game is a free fun app to teach kids how to spell. In this app when you start this app, you will be given a choice to choose a category to play from the given ones like animals, professionals, music, food, vehicles, shapes, colors, fruits and vegetables, etc. You can also choose a difficulty mode to play from easy, normal, or hard. When you choose a category an image will be displayed and the name of the object in picture will be spoken out loud by the app. Now you have to enter the name of this object in the picture using the jumbled letters on your board. Drag the letters to there right position and form a word. You can also use the hints option when you are stuck. The hints option is available on the left side of the screen with a bulb icon. You can go back to the home screen if you want to change the category you are playing under. 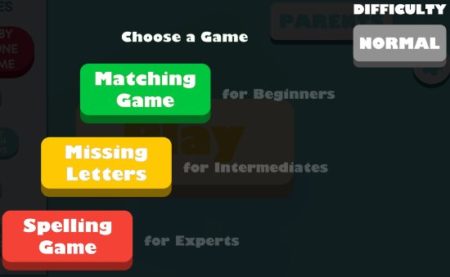 Kids Spelling Games is a nice app to teach kids how to spell. The home page of the app has a big button indicating you to play the game. There are some settings options you can change if you like. Click on the play button to start playing the game. Now you will get a screen to choose which game you want to play matching game, missing letters, or spelling game. The difficulty mode of the game can also be adjusted from the right corner.

The matching game will show you a word which is not colored, along with that colored letters of the same word are given at the bottom in a jumbled up form. You have to drag these colored letters to there right positions in the word. When you move the words the background sound will read the letter out loud so you know how it is pronounced. The missing letters game you have to fill in the blank with the missing letter. In the spelling game you are shown an image of the object you have to name, then you are shown jumbled letters and blanks to be filled in. 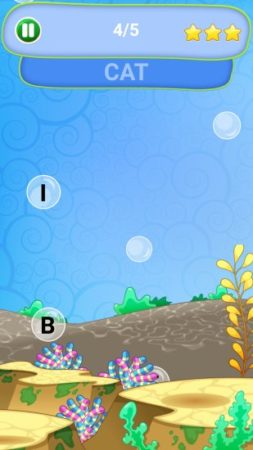 Spelling Monster Free is yet another fun way to teach kids spellings. In this game you can start with entering a custom word list.  You can go to the words button on the home page and click create word list. Then go ahead and give a name to your word list and start entering words that you want your kid to learn. After you have entered the words that you wanted, you can go back to the home page and click play button. This will show you a screen with various games on it like letter pop, letter catch, missing letter, lighthouse letters, word harvest, letter angling, word jumble, and word traffic. Some of these game are only available in the pro version of the app. The free games are very nice as well.

In letter pop you are shown balloons with letters on them. You have to pop balloons with letters that form the given word at the top of the screen. This game screenshot can be seen above. Similarly, other games are quite fun to play as well. The custom list of words gives you an option to teach kids the words you want them to learn. 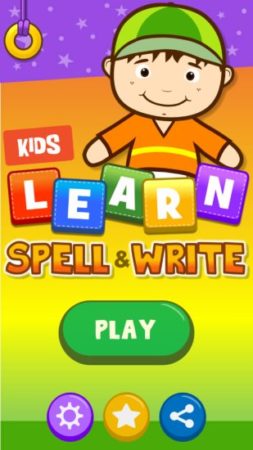 Kids Learn to Spell is a app to teach kids how to spell. The app has a start button on its home page when clicked it will take you to a category selection page. The categories include things like animals, food, clothes, Christmas, home, tools, vehicles, holidays, etc. Choose your category and then also choose the difficulty level you want to play from easy, medium, and hard. Once you do that you will be shown an image and some jumbled letters at the bottom of the screen. You have to select letters from the bottom and fill in the blanks below the image to guess the name of the object in picture.

At top of the screen you get clues to help you solve difficult words. You also have a timer running with 15 seconds on it. You have to find a answer within that time other wise you lose a life. Once you lose all the 5 lives you have to replay the level.

These are 5 free Android apps to teach kids how to spell. They can be pretty useful when teaching kids how to spell words using proper phonics. The game which I liked the most in this list is ABC – Spelling and Phonics because it had awesome graphics and sound. The phonics were also pretty impressive and I found it very kid friendly. So check these apps out and see which one you like.