Troff is a free music player app for Chrome to create and add markers on the song timeline. It also lets you slow down songs y adjusting tempo and loop a particular section of the song. Unlike other music player extensions for Chrome, “Troff” lets you add markers, loop, and control the speed of a video clip too. For example, if you want to learn some dance steps from a clip, then you can use this app to observe the steps in slow motion i.e; by controlling the playback speed of the video clip.

Let’s say, you are practicing a song and in between you’re having trouble, then the markers on songs timeline can come handy as you can point out the section of a song where you’ve to work hard. To make a loop, you can add a marker at the beginning of a section of the song and a marker at the end of that section. You can also set how many times the song will be played and waiting time for starting the song again.

The following screenshot shows the “Troff” interface with different options and tools. 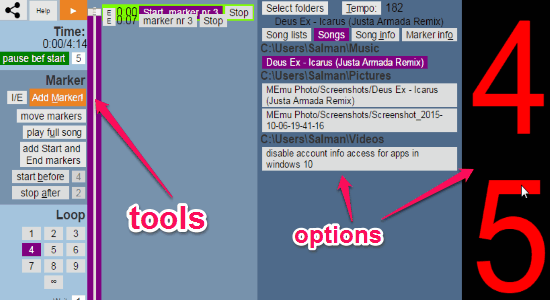 How to Create and Add Markers on the Song Timeline:

You can download and install this Chrome app from the link given at the end of this post or from the Google Web Store.

Step 1: After installing the app, it will automatically import the songs and videos located in your default library (Picture, Music, and Videos). Or you can also add other locations on your PC by clicking the “Select Folder” button at the top. The following screenshot shows how to add other locations for videos, songs, and pictures. 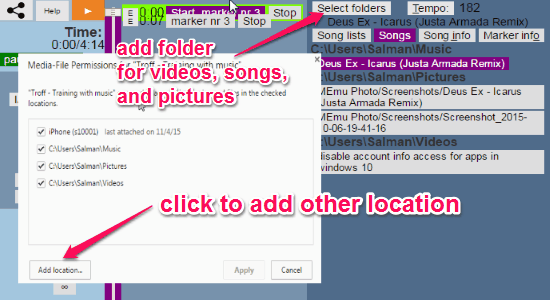 Step 2: As we have already discussed that you can set waiting time for a song to start playing. It also lets you control the volume and speed of the track. The best part is that you can adjust the tempo of the song as 182, 171, NaN, 97, and much more. The following screenshot shows how to set waiting time and change the tempo. 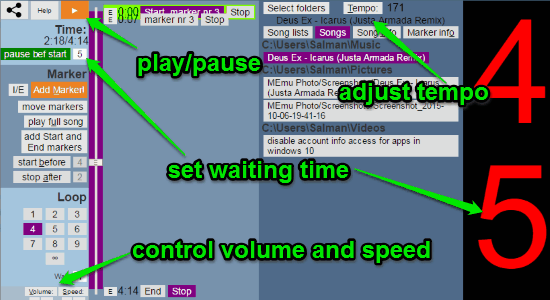 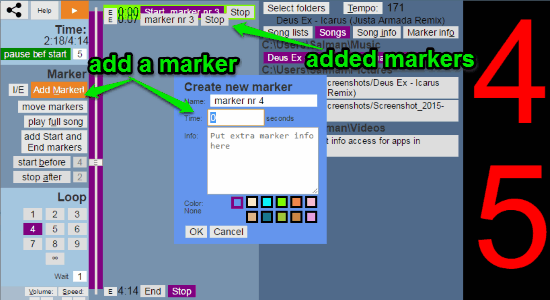 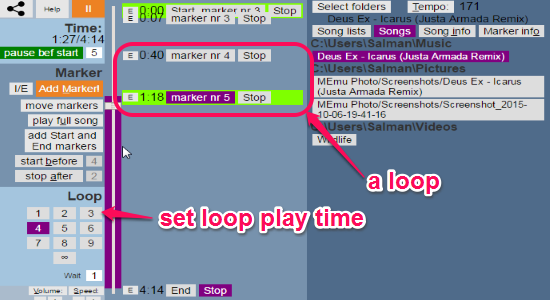 Troff is quite an interesting and useful Chrome app to add markers on song timeline. In addition to that, it lets you loop a section of the song and control the tempo. Personally, I like this app but it would have been better if the interface is made more simple and intuitive.

Try this Chrome app from the link here.