Few days back we did a article on a website which tells you good movies to watch which did not do well commercially but received high critic ratings. Today we are talking about a similar website called Pretentious-O-Meter developed by Niall Beard. What this website does is it takes ratings of movies from ImDB and Rotten Tomatoes and plots it on a meter to show you if a particular movie was a commercial success or a critically acclaimed one.

The below screenshot shows you the home page of the website. 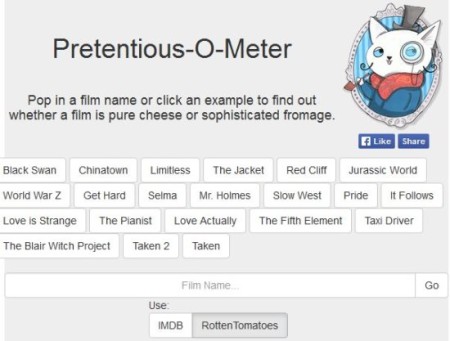 You will find some movie names listed for you to check out how they did on the pretentious-o-meter. There is also a search box from where you can search for a particular movie you are interested in. The below screenshot shows the rating for the movie “World War Z”. The meter shows that people liked this movie a lot more than the critics did.

There are three colors in the pretentious-o-meter: Red, Green, and Orange. The combined ratings from IMDB and Rotten Tomatoes when plotted on the meter decide the color for a movie.

If you want to know if a movie did well commercially or critically, then you can do that on this website easily. The website is pretty easy to use as you would have realized by now.

So next time you want to check out if a movie was really as good as your friends are making it out to be, then go to pretentious-o-meter. It will save you a lot of time on deciding whether to see a movie or not.