In this article, I have compiled a list of 5 free fake Tweet generator websites. You can use these fake tweet builders to create some funny tweets or play pranks with friends. These fake tweets appear exactly as the originally posted tweets and it is really very hard for someone to spot the difference. The personalize option lets you customize the fake tweet templates of these websites which make then look as if they were posted by an authentic user.

The best part is that you can also create fake Facebook posts, chats, WhatsApp chats, Instagram posts, etc. Whenever you want to make any fake social posts then these websites can be used for that purpose. 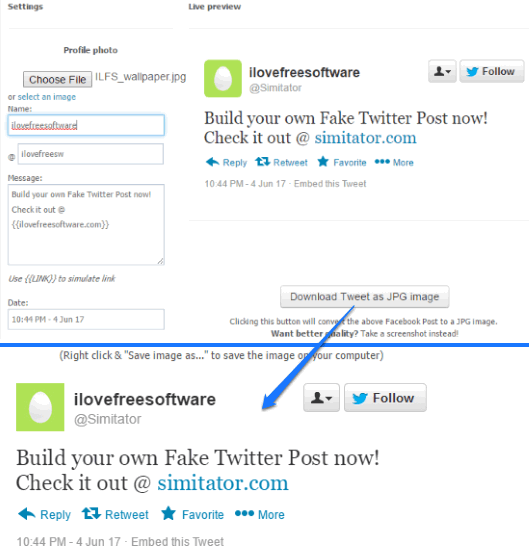 Visit the link provided above and you will see its fake tweet generator interface. On the left, there is a form in which you have to enter details of the fake tweet i.e. its content, name of the user and his Twitter handle name, date of the tweet, etc. To mention other users and links in the fake tweet include them in curly braces in the “Message” field i.e. {{ilovefreesoftware}} will appear as a link in the fake tweet. It also gives you an option to upload the fake tweet sender profile pic but this feature didn’t quite work for me. You can check it out at your end and see if it works. Finally, when your fake tweet is created, click on the “Download Tweet as JPG image”. This will refresh the current page and you will see the fake tweet image. Now, save it as an image from the context menu of your browser. 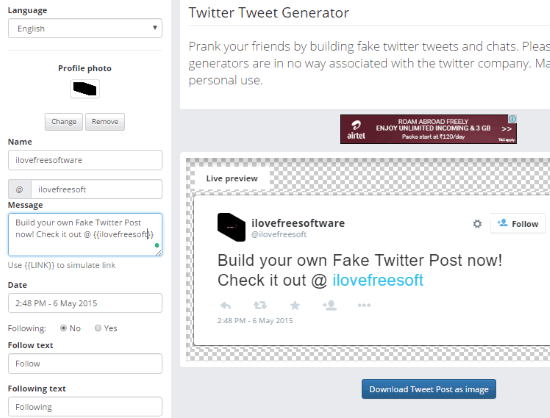 Prank Me Not is another fake tweet generator on my list. The best part is that it supports multiple languages to generate fake tweets. It supports English, Arabic, Portuguese, Greek, Russian, Polski, Deutsch, etc. So, if English is not your native language then this fake tweet creator can be used. It works in the same manner as Simitator i.e. specify fake tweet details and then download it as an image. While specifying the fake tweet details its live preview is also shown.

You don’t have to create any account; just visit the link provided above to access its fake tweet generator tool. You can then enter the fake tweet details i.e. its username, Twitter handle, profile picture, date, and the message. In the message, you can also simulate a link which can be used to mention users in the fake tweet. Enclose the Twitter handle to be mentioned and the link to be simulated in the curly braces, for example {{@ilovefreesw}}. In the end, you can save the generated fake tweet as an image; click on the “Download Tweet Post as image” button. 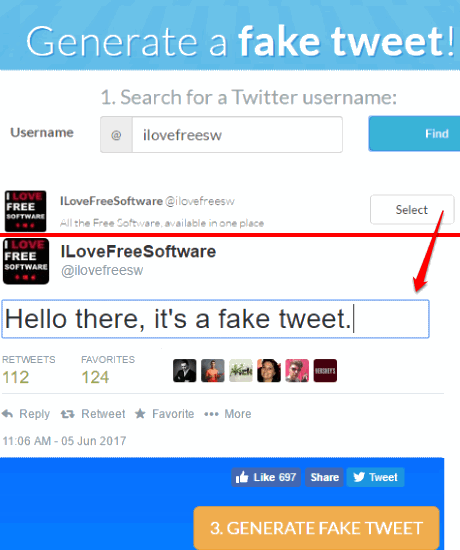 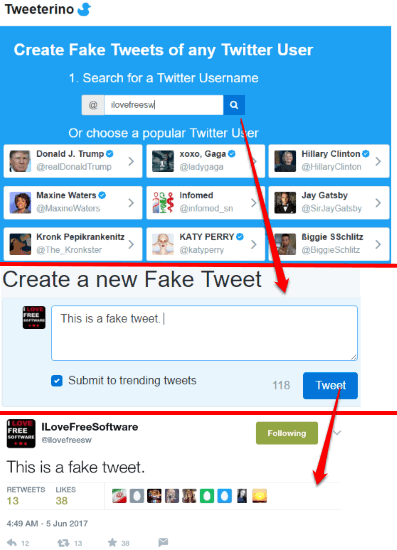 Tweeterino is the next online fake tweet generator. Its online fake builder tool can be used to create fake tweets for any user. It works just like Tweetfake but doesn’t allow you to edit some important tweet details like date, number of retweets, likes, etc. All you can do is specify a message and it then automatically generates the tweet for the current date with some random number of likes and retweets.

Visit the link provided above and then search for a Twitter user. After that, select one from the results and you will the fake profile of that Twitter user. You can now specify the tweet message in the tweet compose area, as shown above. Next, hit the “Tweet” button to generate the fake tweet. In order to save the fake tweet, use the context menu of your browser to save it as an image. 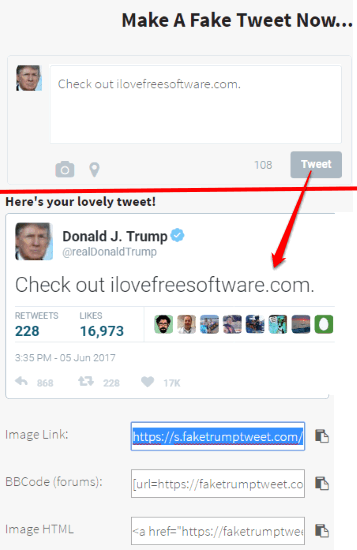 As the name suggests, FakeTrumpTweets is a fake tweet generator for Donald Trump. So, in case you want to create funny and hilarious tweets from Donald Trump then this fake tweet builder has been specifically designed for this. It is also pretty simple to use, visit the link provided above and then enter the fake tweet message. After that, click on the “Tweet” button and wait for a few seconds. It will then automatically refresh the webpage and show you the fake tweet image. You can now save it by following the “Image Link” or save the fake tweet image by browser context menu.

In this article, I have introduced you to 5 free fake tweet generator websites. These websites can be used to create fake tweets and messages for any Twitter handle. So, if you want to play some pranks with your friends or create some funny tweets for your audience, these online fake tweet builders can help you. My favorites from the list are Tweetfake as you can search for users and create fake tweets for them and Prank Me Not as it supports multiple languages.