Handy Currency Converter, is a free Windows 8 currency converter app, that converts a currency to up to 8 different countries currency, simultaneously, at one time. Plus it also shows the current exchange rates among the chosen  countries. You can convert among 147 currencies and see their up-to-the-minute exchange rates. The exchange rates are presented in textual as well as chart formats. And, not only you can convert among currencies but the app lets you convert the currency value to 6 precious metals as well. To name some includes: Gold, Sliver, Platinum, Copper etc. The app is also supported with copy paste buttons, which you can use to quickly convert first, and then paste the values in your textual documents; wherever needed. 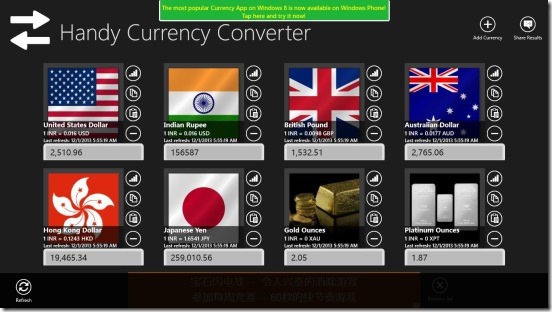 And finally the app also lets you use the Windows 8 Share Charm, to quickly share the currency conversions directly with friends and colleagues. And, the app is not only limited to these features, there are some extra features in the app, which you can unlock for few little bucks.

Certainly, this Windows 8 currency conversion app, is very handy. It’s not just a currency converter, but it also tells you the live exchange rates among currencies. Now, that’s pretty good feature that one can have in his currency converter. Plus you can also see the actual charts of the rise and fall of exchange rates between the selected currencies, for the current date that is 1 day, 5 days, 3 moths, 6 months, 1 year, 2 years, 5 years, and Maximum. But only the current date chart that is 1 Day, is free. For rest charts, you have to unlock them. 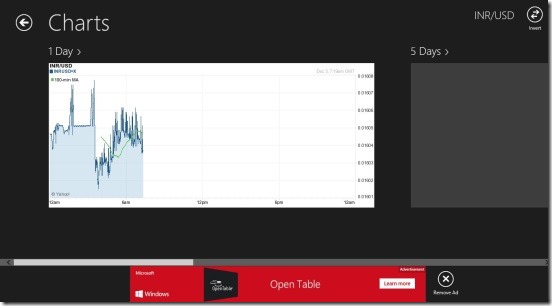 The app has pretty good list of country’s currencies, that you can choose to convert the currency between. There are total of 147 country currencies and 6 precious metals that includes: Gold, Sliver, Platinum, Palladium, Copper, and Aluminum. By default you can add up to 8 currencies for a simultaneous conversion. That is you can convert and compare the currencies among 8 different currencies, all at one single time. This does helps in quickly knowing what value the currency holds from country to country. 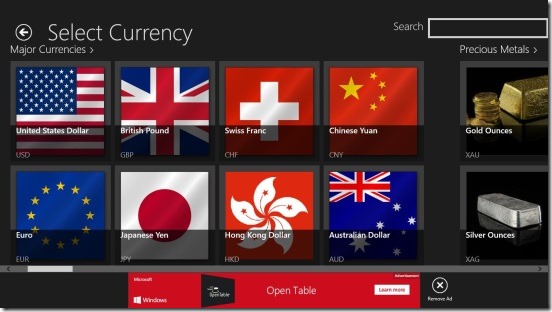 The app is very well made, and that gives you a very simple, easy, and quick medium to convert the currency. All you have to do is click on country’s flag at currency conversion screen, to select the countries or metal. Once you have all the countries selected, simply type the desired source value under the respective source country flag. All the other selected countries will show their respective value for the source value. There’s no particular rule that the source country has to come first on the left side. Any country currency can be the source in the list of selected countries. Now, that’s a pretty good feature. Also, each conversion is real-time conversion. That is as you type the value, it starts getting converted in real-time.

The app uses internet to get the exchange rates. And it also caches the rates value locally in your Windows 8 devices, so that when there’s no internet connection, it can still convert the values. 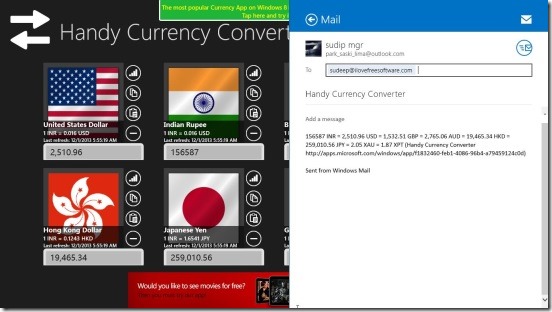 Do check out these other good currency converter apps for your Windows 8 devices: Monetizer, and XE Currency.

Handy Currency Converter, certainly is a handy Windows 8 currency converter app. It’s fast, functional, and pretty clean. It does it’s job well. And also shows the exchange rates. That does add more to the app’s usability. Though, I wished few more features were free. Still it’s quite good. All in all, a must have Windows 8 app.

You might find this Windows 8 Windows 8 MP4 To MP3 Converter handy, that can convert MP4 to MP3 files right in your Windows 8 devices.