Web Cartoon Maker is a free software that lets you create cartoon videos easily. It’s a simple and easy to use software that works on the principles of C++ programming; however, it doesn’t require much of the programming knowledge. Web Cartoon Maker can create full length animated movies in AVI format, which can be converted to DVD or blu-ray format, or can be uploaded to YouTube in HD format.

An interesting thing about this app is that it doesn’t use the modern WYSIWYG interface for creating and previewing animations, yet it provides the simplest and easiest ways to create cartoon videos quickly. Before we move further and see how to use Web Cartoon Maker to create cartoon videos, let’s have a quick look on its download and installation part.

Web Cartoon Maker is available as a freeware and can be downloaded from its official website using the link given at the end of this article. The download will consist of a setup file of size 6.46 MB, which  will run an installation wizard when you double-click on it. The wizard will guide you how to install Web Cartoon Maker in your system and once installed, you can use the app to easily create cartoon videos in a simple way.

Help And Tutorial for Beginners:

Web Cartoon Maker is a simple app, and as I have told in the beginning, it doesn’t require much of the programming skills. However, if the concept of creating animations using coding scares you, feel free to read the full online tutorial, which explains the basic programming concepts needed to use the app. The tutorial gives step by step explanation of the whole process with detailed examples that makes the task of creating animations easier for you. And if you don’t have a programming background and fear to try your hands on Web Cartoon Maker, you can download a free book that will help you in learning C++ in a fun way.

However, the tutorial is comprehensive and lengthy, so you can leave it for the spare time. For now, let’s have a brief overview of the process of creating cartoon videos using the app.

Web Cartoon Maker works by compiling scripts written in C++ to create animated cartoons. The basic concept revolves around including text, images, and character objects in the script and then animating them through C++ code. Web Cartoon Maker provides several pre-built images and characters that can be downloaded free of cost from the app’s Media Library. You can use these objects in your animations by including there links or header files (eg. dog.h ) in the source code and then make the characters walk, speak, or wink by simply calling some built-in functions.

You can find details on these functions in the tutorial and use them to make the characters move or speak in the animation. For speech, you can use the online files available in the Media Library, or also use your own audio file saved in .wav format. After you complete the script, you just need to compile the source code. Web Cartoon Maker dynamically download the included files and other objects in run time and plays the cartoon video in the integrated WCM Player. 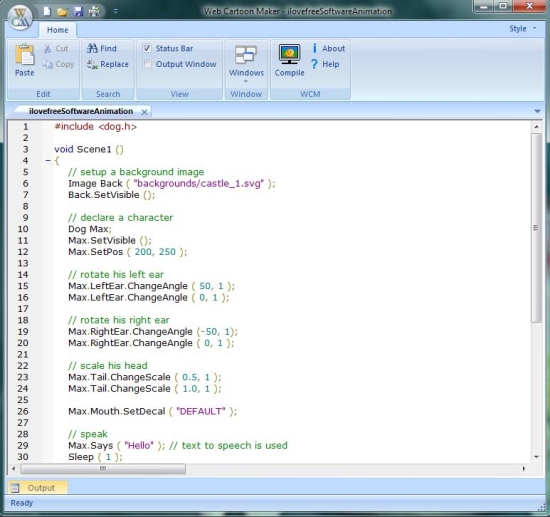 You can test play your cartoon video in the media player and export it to AVI format if you want. Now have a look at a sample cartoon video I have created using this app.

I have created a sample cartoon video using Web Cartoon Maker and uploaded it on YouTube. Have a look on it here.

And here is the code I have written to create this sample cartoon video:

See how simple is that to make your own full-length animated movies without having much programming skills!

Web Cartoon Maker is an amazing tool that lets you create full length cartoon videos and upload them on YouTube. It’s a handy and lightweight app that uses a simple programming approach to create beautiful animations without WYSIWYG support. Web Cartoon Maker is simple, handy, and is completely free. Download now and give it a try.