Risk is a free turn based strategy game where you are tasked to take over the world using your military forces in a struggle between multiple players. Risk can be played between a minimum of two players and a maximum of 6 players. The board is divided in 42 territories where players battle each other to get control of each territory. The one who conquers all the territories wins and in the process other players are eliminated. Conquering territories wins you Risk cards which in turn can be used to fortify your troops.

This is a classical board game which has been emulated online. The game is really simple but requires patience and most of all brains. Luck also plays an important role in this game since the success of attacks is based on dice rolls. These factors make Risk a really adventurous game at times. 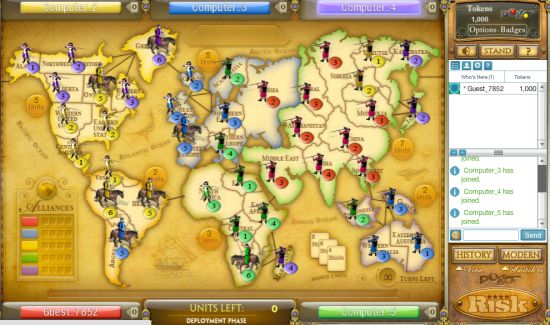 So let’s take a better look at this awesome strategic game. If you’re interested in games like Risk, I am sure you will love Forge of Empires. This is a really engaging turn based game which also has elements inspired by Risk.

How to Play Risk

When you start the game, the computer will roll the dice to determine the turn order of the players and will prompt you to select a color. The next step is the deployment of forces. You will be required to place your troops over the map. A really good strategy here is to keep a country as a center of your forces where you deploy a large number of forces. 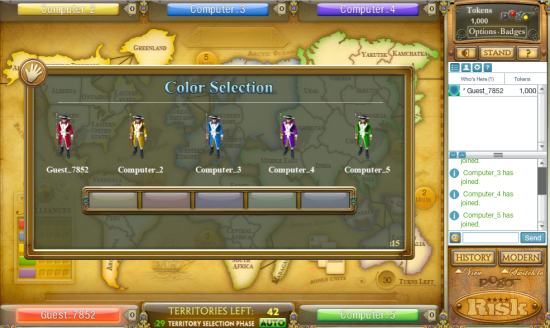 The game is divided into 3 phases that are continued in a cycle. They are namely Reinforcement, Attack, and Fortify. In the first cycle after deployment, you’ll be required to attack your opponents with your troops. You can only attack opponents that are placed on neighboring territories. Left-click the troops you want to attack with and left click the neighboring target again. The war will be based on dice rolls but it also depends on the number of troops. But if you’re unlucky, you might even be defeated by a tiny army. 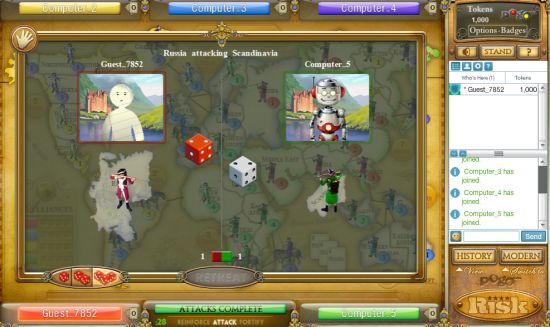 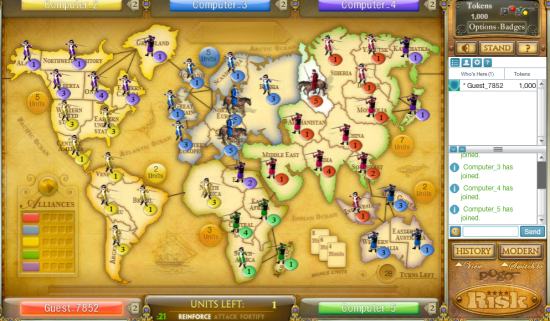 The game continues till a player takes over 24 territories or the whole world (depends on the victory condition). If the game turns run out then the one having the most points as defined by the formula “Total armies + armies awarded for holding territories (1 for every 3, plus continent bonus) + (number of cards / 3 * number of armies for next turn in set)” will win. Gameplay changes can be made from Options on the top left.

Risk is one the best games if you like to keep the game simple, without hefty graphics and really complex gameplay. Even though it’s a small and simple game, you can use a different strategy every time you play this game. The gameplay was smooth and I didn’t come across any bugs or errors. In my opinion, this game deserves 5 stars.

Have any suggestions of games I should review? Leave them in the comments!