King of Thieves is a free Windows 10 multiplayer game app where your character needs to steal gold and gems to become the richest king of thieves. The game has been developed by the same team which came up with Cut the Rope game, which was indeed very popular. So being from the same team, the game should be as fun and exciting.

The app can be downloaded from the Windows 10 store or from the link given at the end of this article. The below screenshot shows the game window. 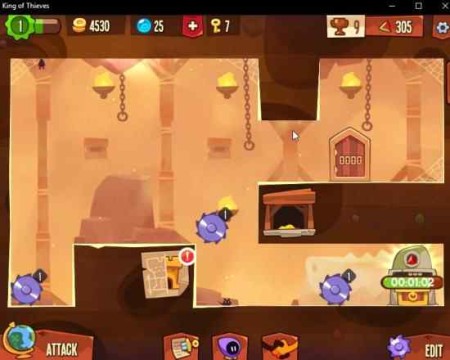 In this game, the first window will ask you to give a name to your character in the game. Once you do that a guide/friend will take you through the initial game. The guide will help you create your dungeon to hide and hide your wealth. The above screen show your dungeon where you are hiding your gems.

Other people will try to attack you dungeon to steal your gems, so you have to create strong defense for your dungeon so that people can not intrude. 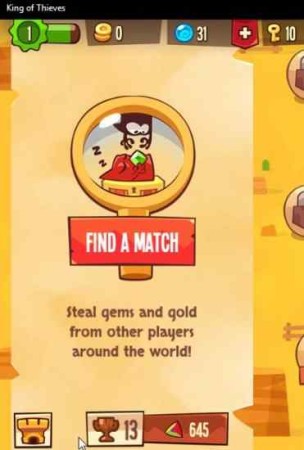 The attack option at the bottom left side of the app window lets you attack dungeons of other players and steal their wealth. The more wealth you have the closer you get to being the king of thieves. In the above screenshot the game finds a match for you to steal from.

You can sign in to your Facebook account and have your friends join you to defeat other thieves. Compete with players on the leader board to move up the ranks. 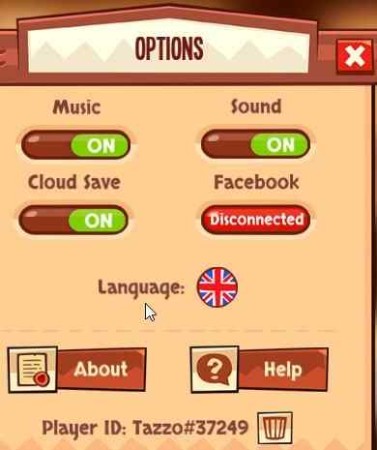 The settings option of this game will let you change a few things like turn the music and sound on or off. Save your game data on cloud to play across devices. Change the language of the game. The screenshot of the settings page can be seen above.

The game is quite fun and addictive. Stealing gold and gems from other players seems quite difficult as everyone has put up strong defense against intruders. Don’t forget if you are stealing from other players, they will also be back to steal from you. So keep your defenses up and strong. Overall, the game is exciting and can be tried out.

Check out King of Thieves for Windows 10 here.