Textografo is a free online flowchart maker that helps you make a flowchart of an algorithm by using text syntax and markup notation. All you have to do is write the code to the flowchart you are making. Textografo will format and arrange the shapes automatically.

This free online flowchart maker is very useful for programmers. It is because most programmers can code fast.  Providing a coding oriented flowchart construction saves a lot of valuable time and programmers will surely enjoy it.

The only limitation of this free flowchart maker is that you can only make 5 flowcharts in the free version. But, you can use all the features and there is no time limit to use Textografo.

So without further ado, let’s take a better look at Textografo. You can also check out these other websites you can use to make flowcharts.

How to Make a Flowchart By Writing Steps?

Textografo helps you make a flowchart of an algorithm or workflow by typing in an algorithm using text syntaxes and markup notations. You can always use the drag and drop method if you don’t agree with text based flowchart construction.

To start making a new flowchart, you need to type in #flowchart ‘project name’.  Alternatively, click on New Flowchart (empty) to enter the same. This will name the flowchart you are making.  You’ll need to enter the flowchart shapes with their hashtag codes as set by Textografo. The codes are as follows:

On Textgrafo, I used the hashtag syntax to write a flowchart algorithm. The syntaxes were automatically indented. In cases of decisions and linking, I had to use the Tab key and Shift-Tab combination to move a branch in and out of the algorithm structure. The following screenshot shows what I wrote: 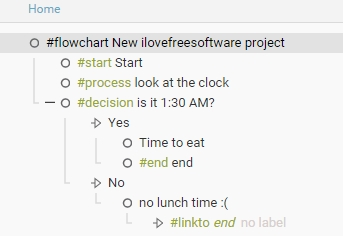 And this is the resulting flowchart: 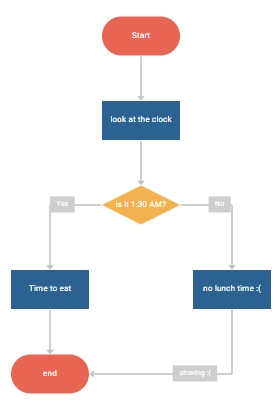 How to Change the Theme of Flowchart on Textografo 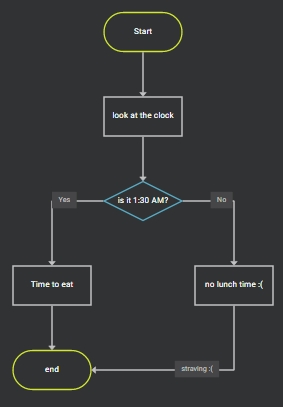 This free online flowchart maker also gives you the ability to change the overall looks of the flowchart with themes. To select a theme, click Theme Pane option on the top menu bar. You’ll be shown a list of themes you can apply like Sparta, Butterfly, Fruit Moon, etc. Click a theme to select it. I personally liked The Programmer theme.

Textografo also provides a step by step animation of your flowchart. To see it, click on the Play option on the menu at the top. You’ll be directed to a page where your flowchart will be played. To go a step forward with the workflow animation, left-click on the animation or click the right pointing arrow on the top-right of the page. Similarly, right-click on the animation to roll a step back. You can roll it back also with the left pointing arrow on the top-right of the page. An awesome feature that you can use during presentations.

How to save Flowchart as PNG Image file from Textografo

This free online flowchart maker also lets you save the flowchart as a PNG file on your computer. To do that, Hit Save diagram as PNG button. A dialogue box will appear where you can rename the save file to whatever name you like and click Save.

As mentioned earlier, this free online flowchart maker is pretty awesome as it arranges the shapes/elements automatically. You don’t have to waste time dragging and placing the shapes and then linking the shapes with each other. Since flowcharts are an important part of programming, programmers will find it really easy to make a flowchart in a matter of seconds through coding. Textografo is definitely a 5 star service.

Are you a programmer? Do try Textografo and let me know your opinion in the comments!