The best part of this free software is that it lets you select multiple apps/packages to block at once.  It also lets you export a list of blocked and unblocked Android apps/packages as a text file. 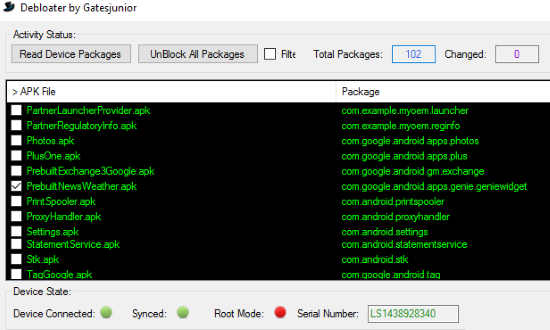 How to block pre-installed Android Apps without root using Debloater:

Blocking built-in Android apps using Debloater is really straight forward; you just have to select application packages you want to block at once. It will then automatically block these selected packages and you won’t be able to view these applications on your Android device and its Application manager. If you somehow damage your Android device while doing this, the only solution is to factory reset it.

Step 1: Download it from the link provided at the end of this article.

Step 3: Now open Debloater and click on “Read Device Packages” button. It will then display all Android apps and packages installed on your Android device, as shown in the main screenshot. Select applications you want to block and then click on Apply button, as shown in the screenshot below.

It will then start blocking the selected apps/packages.

If you want to unblock Android apps, then click on UnBlock All Packages button. So in this way, you can block built-in Android apps without root.